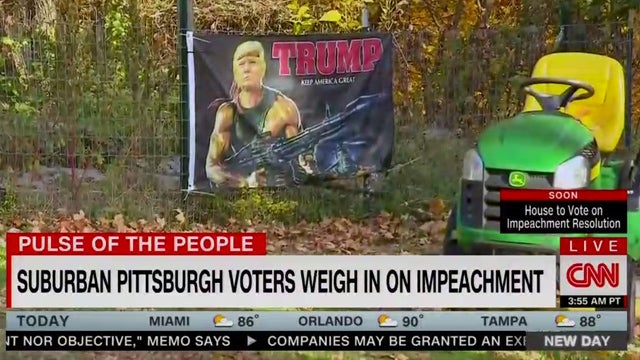 They wanted to find out what the natives thought about what’s going on in Washington, D.C. They sent National Correspondent Miguel Marquez to go talk to voters outside Pittsburgh and take their temperature on the impeachment inquiry into Donald Trump. And here is the first sound bite.

MARQUEZ: What do you think of impeachment?

MARQUEZ: (voiceover) James Dillie, a coal miner and his stepson Roc Dabney are huge supporters of the president, proudly displaying Trump flags like this one. They see impeachment as Democrats trying to reverse the outcome of 2016.

JAMES DILLIE: I think they’re just head hunting. They’re mad they lost and just trying to get him out. 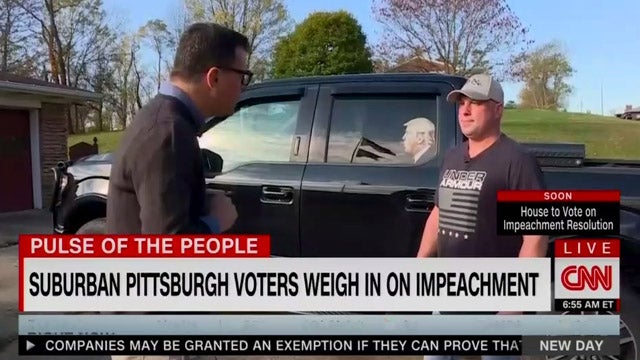 MARQUEZ: (transition to William and Jacquelyn Krachala) You voted for Donald trump, you voted for Hillary Clinton. Has anything changed?

MARQUEZ: (voiceover) Bill, a lifelong Republican is as opposed as ever to Donald Trump. But impeachment?

WILLIAM KRACHALA: I don’t know whether impeachment would solve anything or not, it just would create a lot of upheaval. But I’m hoping to hell that he gets elected out of office. 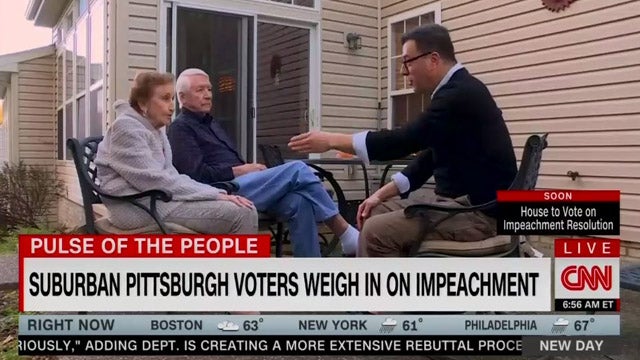 RUSH: All right. Now, you look at this in one way, CNN if they could, would have nothing but, “Yeah, impeach him, get rid of him yesterday, get rid of him tomorrow, I can’t stand the guy!” Their ideal would be to be able to go find a bunch of Trump voters who’ve had it, don’t like the guy, think CNN is the gospel, yes, get rid of him. They couldn’t find any. How do we know they couldn’t find any? ‘Cause they didn’t put them in these sound bites, didn’t put them in these reports. Here’s the next sound bite of Miguel Marquez reporting about what voters outside of Pittsburgh think of impeachment.

MARQUEZ: Cody Spence, a registered Democrat in 2016, was struggling to pay for healthcare. Today his financial situation has improved. He credits Donald Trump.

SPENCE: I don’t think at this point that there is a reason to impeach him. You get some hard evidence that the people of the country can see, that’s a different story.

MARQUEZ: (voiceover) Some moderates question the wisdom of an impeachment fight now.

SUSAN LUISI: Well, we’ve already gone pretty far into this presidency. So do we really want to spend the last time of it impeaching someone who may or may not be elected again?

Yet the media has sung the praises of the whistleblower, “Oh, we must listen! Oh, we must preserve his identity.  Oh, this man is a godsend.  Oh, this man is exactly why we have people in government doing the Lord’s work,” blah, blah, blah.  Who is the media’s audience for this?  It’s not… Contrary to what people might think, it’s actually not the American people.  They are not attempting to literally inform the American people.  They’re trying to hoodwink them! 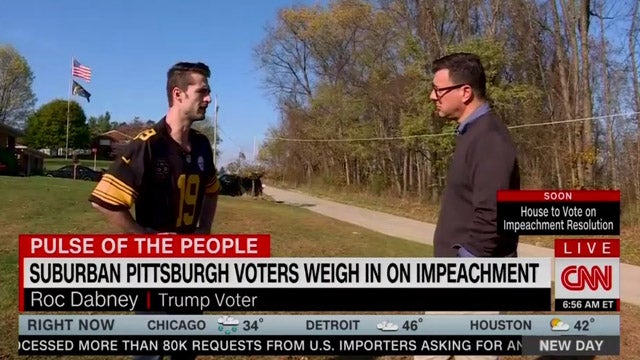 Thus, they have to create this gigantic, grandiose illusion that all of Washington is alarmed. (dramatic voice) “All of Washington is at a feverish pitch! The country is in a very precarious position with Donald Trump in the White House. Drastic action — immediate drastic action — is necessary!”  This is what they’re attempting to create, and their audience — the Democrat audience and the media audience — is the Republicans.  Now, don’t misunderstand.  Of course they know they’re gonna need public opinion, ultimately.