The Democrats’ Articles of Impeachment

RUSH: The current issue of The Limbaugh Letter just dropped. Of course, as the editor, writer, and publisher, I have an advanced copy. And I want to share — normally I would not do this. Normally I would not read anything from the newsletter because then you wouldn’t have to go subscribe to it. But I want to share with you something we did in the issue just coming out today. 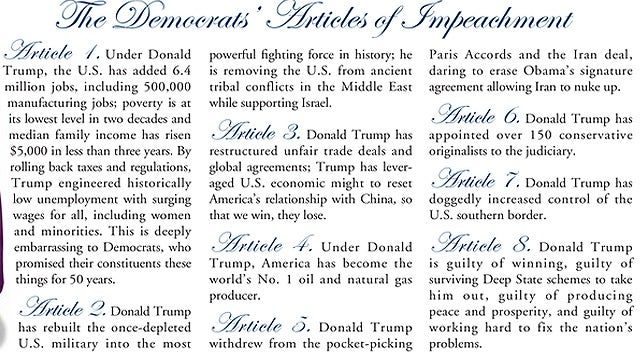 We prepared, because we were prescient, we knew this day was coming. We took a flier and a wild guess that it would come during the month of this current issue. So we prepared the Democrats’ articles of impeachment. They haven’t done this yet. That won’t happen — and they’re committed now, folks. This will probably happen around Christmastime. That’s the timeline. They may make it; they may not.

But they’re all-in now on this being their campaign issue for next year. And, of course, they’ve got a lot of senators that are running for the presidency, running for the Democrat nomination who might be sidelined legally because they’re part of the jury, so they may not be permitted to campaign at the same time. They may not be able to legally to talk about this impeachment as they campaign.

I don’t know if there’s been any coordination with the presidential candidates or not, but this is obviously their 2020 election issue. So if you’re gonna impeach Trump, here are the Democrat articles of impeachment.

Under Donald Trump, the United States has added 6.4 million jobs, including 500,000 manufacturing jobs. Under Donald Trump, poverty is at its lowest level in 20 years. Median family income has risen $5,000 in less than three years.

Under Donald Trump, by rolling back taxes and regulations Trump engineered historically low unemployment with surging wages for all, including women and minorities. This is deeply embarrassing to Democrats who promised their constituencies these things 50 years ago and have yet to deliver.

Article two. Donald Trump has rebuilt the once depleted U.S. military into the most powerful fighting force in history. He is removing the United States from ancient tribal conflicts in the Middle East while supporting Israel. Again, things the Democrats have promised their voters they would do the last 50 years.

Article three of the Democrats’ articles of impeachment. Donald Trump has restructured unfair trade deals and global agreements. Trump has leveraged U.S. economic might to reset America’s relationship with the ChiComs so that we win and they lose. And when communists lose, it’s not helpful to the Democrat Party.

Democrat article of impeachment number five. Donald Trump withdrew from the pocket-picking Paris accords and the lousy, stinking, rotten Iran deal of Barack Obama, daring to erase Obama’s signature agreement that allowed Iran to nuke up. That’s right. Under Barack Obama, the Democrat Party permitted the nation of Iran to advance with our assistance its entire nuclear grid to eventually include the product of nuclear weapons. Donald Trump took it back. 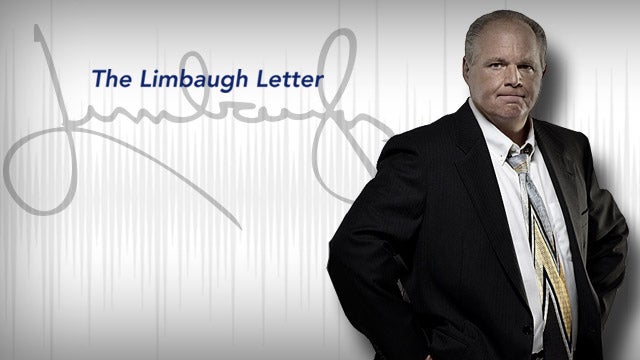 Democrat article of impeachment number nine. All of this makes the Democrat Party look utterly irrelevant and useless. That’s from the current issue. I added number nine here on the fly. You will not see it in your issue of The Limbaugh Letter, but you can add it in your own mind. That’s really what they’re up against here.