All New Stand Up for Betsy Ross Items!

RUSH: I’ve had a bunch of people over the last three weeks to a month… You know, we haven’t talked about the Betsy Ross campaign in a while, and I’ve had people ask, “Rush, what’s going on with that? You didn’t just drop it, did you?” (chuckles) Drop it? No way. So, I thought I would take a minute here to update you on the Stand Up for Betsy Ross campaign that was started right here on the Fourth of July of this year. You remember Colin Kaepernick caused this whole controversy.

Nike came out with a Fourth of July special brand of tennis shoes. They had the Betsy Ross flag on the heel, the original flag of the United States of America. Colin Kaepernick comes out, says, “I don’t like that flag! That flag is representative of racism and racist cops and bigotry, and I don’t think Nike should sell ’em.” So what did Nike do? Nike pulled ’em. Nike pulled them, just because Colin Kaepernick didn’t like ’em.

Now, I think there’s a 50-50 chance this whole thing was an orchestrated publicity stunt.

If it was, I don’t mind falling for it because we have done — you have done — such wonderful things for people as a result of this. See, Betsy Ross isn’t political. The Betsy Ross flag is not political. It doesn’t stand for anything about the greatness of the founding of the United States of America, the original 13 colonies. So Nike pulls the Betsy Ross flag sneakers. We were just sick and tired of one-offs, like Kaepernick belittling the flag, politicizing the flag.

For crying out loud! Go ahead and politicize the NFL if you want to and try to destroy that, and go ahead and politicize everything else you touch, but leave the flag alone. Betsy Ross isn’t political, and the flag should not be political. The flag represents unity. The flag represents the founding and the unity of the states of the greatest country in the history of humanity. So we set out on a mission to stand up for Betsy Ross. Betsy Ross was an American heroine.

She was an early leader in business and design, maybe one of the early feminists. The early American flag is the most fundamental symbol of our country and its miraculous history. Our flag represents independence from tyranny. It represents freedom for everybody. It represents ingenuity. It represents strength and perseverance. It’s not political. It’s not discriminatory. It’s not racist or bigoted or pro-cop or anything of the sort.

This is a great organization started by Frank Siller, Stephen’s brother. He lost his brother, a firefighter in New York killed while responding to the most vicious terrorist attack on our country, 9/11. Stephen Siller was a firefighter who went back in the Towers to try to save people. Tunnel to Towers pays off mortgages in full for families whose father or mother was injured or lost serving our country. Tunnel to Towers provides a home and stability in a horrific time for these families.

It turned out, folks, we could not source or print these T-shirts fast enough.

Hundreds of thousands of original T-shirts sold. It was incredible. It was overwhelming. It was wonderful to be part of. Now to date — thanks to you, this phenomenal audience — over $4 million and counting has been donated to Tunnel to Towers. Get this: Over 50 mortgages will be paid off this year because of your purchase of these shirts! A $27 item has generated $4 million and counting. Fifty mortgages paid off this year for the families of heroes lost or injured defending our country.

The Stand Up for Betsy Ross campaign has been so incredibly successful, over 100 American jobs were created right here to source, to print, to pack, and fulfill these orders. These shirts come from a small town in Pennsylvania to our warehouse here in Florida, and we had to staff up a hundred people to get this all done. We had no idea. We would have been happy if 50,000 T-shirts had been sold. Well, we’re way north of 300,000 now.

So a hundred jobs have been created. And we still have ’em because we are still kicking butt here. So here’s the deal. We are thrilled to announce today the Stand Up for Betsy Ross campaign continues to roar on in response — Frank, could you come in and grab me those two things off the sofa over there? We are unveiling new Stand Up for Betsy Ross gear that is absolutely perfect for the cooler weather in the fall and, of course, for Christmas, holiday presents.

We’re gonna have a new section of the Rush Limbaugh Show Store dedicated specifically for the ladies. We have had so many requests, “You need to do T-shirts with V-necks and long sleeves. You need to do a pink one, you need to do that.” We’ve tried to respond to as many of the requests that we have gotten. There is a stunning Betsy Ross zip-down fleece in a light gray. Hand me that one. Look at this baby, folks. I’m holding it up here now on the Dittocam. This is a zip-down fleece, light gray, embroidered flag on the chest, and, of course, if you go to the sleeve, what do you see there? You see my signature. I don’t have it displayed. Trust me, it is there. I need four hands to — take that off my hand if you would.

We’ve also heard from the cotton crowd. “Hey, it’s a great T-shirt, but where’s the cotton?” It was unique. It was unlike any T-shirt anybody ever had, but of course the cotton textile crowd, “What about us, we’re great Americans, too, what about our stuff?” So we now have a 100 percent cotton, or nearly 100 percent cotton option.

This is a hoodie. This is the Bill Belichick Stand Up for Betsy Ross – (laughing) See the hoodie here in the back, and that’s the Stand Up for Betsy Ross flag on the left side, and again, my signature there on the lower left. These are just two of the samples that I brought in today. And, folks, this is top quality, top gear stuff. It’s gonna last a long time. We don’t sell junk. We don’t sell knockoffs. We don’t sell anything cheap. We get the best price point for the highest quality we can because you matter more to us than the dollars that come in from this.

Now, keep in mind the proceeds here go to Tunnel to Towers. This is not a profit endeavor for the RushLimbaugh.com store. The Stand Up for Betsy Ross campaign is indeed just that. And the partner here, the charitable partner is the Tunnel to Towers Foundation. So go to RushLimbaugh.com, click on the “Store” tab to see all of the new exclusive Stand Up for Betsy Ross campaign gear.

And there are other items. There’s stuff that doesn’t have the Betsy Ross flag. We have stocked this store up. I mean, we’re rivaling Amazon here. And you’ll see when you visit RushLimbaugh.com and click on the “Store” tab. Now, this is not a sales pitch, this is 100 percent true. There are only limited quantities.

So I encourage you to hurry and get yours today, especially if you’re buying for the holidays or if you’re buying because it’s getting chilly, fall is coming for many parts of the country, because our experience is that these items go quickly. This is not a sales pitch. We do not like having to put up “Out of Stock.” We don’t like having to say that under items pictured on our website. We have to when it happens. We don’t like to. 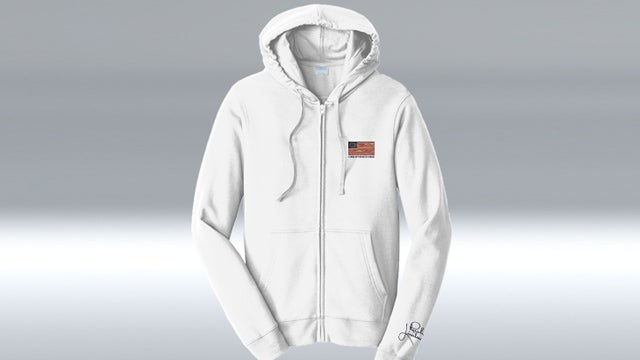 Things sell out quickly, we do our best to restock, but remember, we’re scaling up here, and this is a massive effort to find the tens of thousands of items that are the same fabric, the same design, the same print job, the same everything, because everything must be uniform. You see it pictured there. That is what you’re going to get.

Now, we do sell out. We don’t want to get a bunch of hate mail saying, “Where’s my fleece?” So I’m just telling you, quantities are limited. They’re not unlimited. We got a decent stock. Don’t misunderstand. Not trying to panic you. But these things, if history is any guide, are going to jump off of our shelves and off of our Web page.

Proceeds of the Stand Up for Betsy Ross campaign, again, go to Tunnel to Towers. We hope to announce an even higher donation number in the near future. Thank you from the bottom of our hearts because we haven’t done anything here except make this stuff available. You have made that $4 million and counting, the 50 mortgages that have been paid off for families where the head of household was killed or severely wounded in service to the country, you have done this.

And note also not a single word about any of this in the Drive-By Media. Yet if Geraldo Rivera takes his staff to lunch and spends $8,000 on it, it makes Page Six. But that’s not why we do it. It’s not why we do anything. We do everything we do here for the substance, for the reality and for the decency of it. So at the RushLimbaugh.com website, find the “Store” tab, and you’ll see exactly what I’ve been talking about. We’ve ramped up, we’ve stocked up, and we are ready to go to continue the campaign.