RUSH: Julie Kelly writing in American Greatness now has the timeline. And I want to share the highlights of this piece with you because this — and I’m gonna link to this at RushLimbaugh.com. It’s called “The Impeachment Schiff Show,” and it’s from American Greatness. It’s their website.

This failed bill of particulars is really nothing more than a historical recounting of all of the efforts the deep state — Schiff, Pelosi, Mueller, Comey, Brennan, Clapper, McCabe, Strzok Smirk, Page — this is what they’ve all done to date. If you put together an indictment, if you put together a list of activities that chronicle historically what they did, and you note that they’ve all failed, here they are. 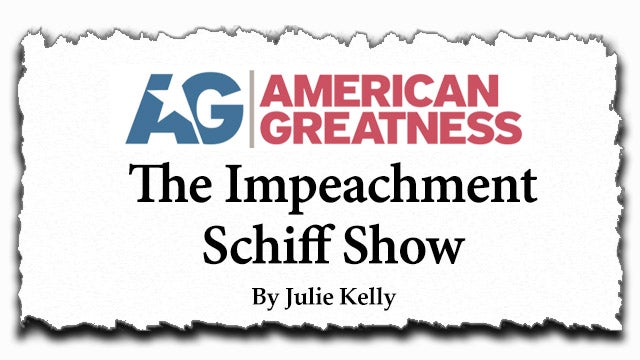 Now, that paragraph recounts everything they’ve tried that has blown up on them. There was no Russian collusion. Stormy Daniels effort to get rid of Trump bombed. Then they said he evaded income tax payments and they got the Southern District of New York and the Manhattan DA on it. Big, fat zero. Obstruction of justice, big, fat zero. The Emoluments Clause, big, fat zero, 25th Amendment, gonna wear a wire, get Trump proving he’s insane, cabinet has to get rid of him, bombed. The Charlottesville rally where they said Trump was sympathetic to neo-Nazis, bombed!

The phone call with the Ukrainian president is the current one, and they’re going for the whole ball of wax on this one. Now they’re going, they tell us, for impeachment. “The House of Representatives voted Thursday largely along party lines, with only two Democratic defectors, to begin impeachment proceedings against President Trump. Schiff, the chairman of the House Intelligence Committee, will manage the initial stage of the sham inquiry; hearings are expected to begin in a few weeks.

“Pelosi, departing from tradition, handed off the impeachment grunt work to her most dependable grunt rather than to the House Judiciary Committee. Pelosi pleaded the Democrats’ case on the morning of Halloween, titillating her caucus of ghouls, witches, tramps, and thieves with tales about the scary monster in the White House. ‘Sadly, this is not any cause for any glee or comfort,’ Pelosi [said].

“‘This is something very solemn, something prayerful.’ But ringing in the ears of every Democrat and NeverTrumper across the land were the iconic words of #TheResistance hero Rep. Rashida Talib (D-MI): ‘We’re gonna impeach the motherf—r!’ … She shouted it on January 4, 2019, just hours after she was sworn in.” We’re gonna impeach this son of a bite me! This is just the implementation Plan B when all the others have failed.

“Now, in a fair and just world where lying scoundrels are dispatched either to the unemployment line or to the set of MSNBC, Schiff long ago would have experienced a swift exit from the halls of power. Schiff lied to the American people and to Congress for more than three years that he had … significant and direct and in-plain-sight and clear evidence that the Trump campaign colluded with the Kremlin to throw the 2016 presidential election.”

Adam Schiff has been lying through his teeth for three years about this. He has yet to produce the evidence because, folks, there isn’t any. “Last month, [Adam Schiff] had to walk back his fake impersonation of President Trump…” Remember Schiff sitting in the committee chairman’s chair, and he’s telling everybody, “The president called the president of Ukraine and told him, ‘Make it up! Make up dirt on Joe Biden and his kid, and don’t get back to me ’til you do!’ He told him that nine times,” Schiff said!

Thirty minutes after saying it… It should have happened immediately. Thirty minutes after he said it, a Republican called him out on it. Schiff said, “Uh, it was just parody. He didn’t really say it. It was parody. Everybody knows it was parody.” It was not parody. Adam Schiff “has leaked nonpublic information to the news media to smear Team Trump, including the president’s son, and [Adam Schiff] accepted a call from Russian [comics] who claimed to have naked photos of Donald Trump.”

Adam Schiff was gonna track ’em down in Brighton Beach. “So, of course, Schiff is the perfect point man for a … dishonest, and nakedly partisan crusade to oust the sitting president. Acting as if no one has been paying attention to him for the past few years … Schiff denied that he would relish [this]. ‘I do not take any pleasure in the events that have made this process necessary,’ Schiff said from the House floor on Thursday morning…

“That’s funny because Schiff himself is the person responsible for manufacturing all of the events that now animate this charade, including the fabricated controversy about an alleged ‘quid pro quo’ between Trump and Zelensky. Not coincidentally, the nub of Schiff’s current impeachment fever dream, Trump’s July 25 phone call with Zelensky, occurred [only] one day after Special Counsel Robert Mueller’s disastrous testimony on Capitol Hill.”

Remember the Mueller report was going to deliver nirvana, and then the Mueller report said, “No collusion, no obstruction.” Adam Schiff and the Democrats said, “Barr made him lie! Barr made him lie! Mueller knows the truth! We want to talk to Mueller!” Mueller said, “I don’t have anything for you other than what’s in the report.” “Barr’s making you lie! Barr’s making you lie! We want you to come up to Congress and testify!” So Mueller agreed to go testify, and he did, and he was doddering, incoherent.

So here we are, Adam Schiff running the Zelensky charade.

RUSH: Now, interesting, Nancy Pelosi… This story is just now running. It’s from TheHill.com. The headline: “Pelosi Suggests Impeachment Could Expand Beyond Ukraine.” Oh, really! Now, why would that be? Why would it all of a sudden have to go beyond Ukraine? Could it be because Tim Morrison yesterday blew Bill Taylor out of the water? Could it be because everybody knows who the whistleblower is and knows what a partisan hack he is?

Could it be that Vindman is attached to the partisan hack which is attached to other partisan hacks? Could it be that the whole thing’s beginning to implode on them so now what’s gonna be next? You’re gonna go beyond Ukraine? What’s it gonna be? Trump leaving New York? Trump trying to run away from paying his fair share of taxes? Somehow this is related to the emoluments clause? What are they gonna come up with next? Well, I’ll read this story during the break and find out what it says. 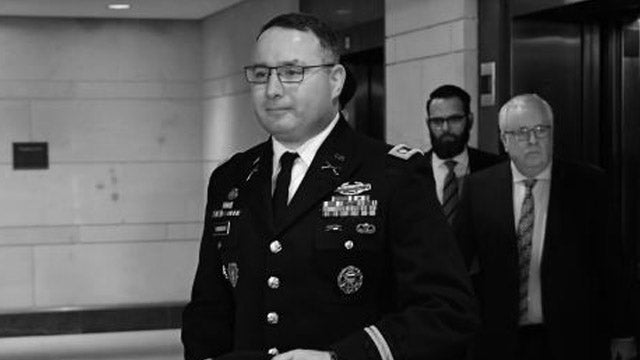 Folks, the bottom line of Julie Kelly’s piece is that everything happening here in Ukraine started with Adam Schiff, that Adam Schiff arranged it all, that what the whistleblower was gonna say… Trump’s phone call happens in July. It happens on July 25th. There were 25 other people on the phone call. As Trump is saying, “Why would I…? With so many witnesses, why in the world would I try to pull something sneaky?” He didn’t. But Vindman was on the call.

Vindman can call Brennan and say, “Here’s what was said.” Brennan says, “Okay.” They call Schiff. “This is what happened.” They call Schiff and they arrange a scenario. “Trump was actually asking the president of Ukraine for help on the CrowdStrike investigation, investigation into him. “Oh, by the way, do me favor. You know, we got some stuff here Biden and his kid, maybe doing some funny stuff in your country. You might want to look into that.”

RUSH: You know what the concern is? The arrogance of these people in the deep state is in their world, only they can do foreign policy. Only they can engage foreign leaders. Not even… “Trump can’t because he don’t have the experience! Trump is a blundering idiot! Trump should have had an ambassador do it.” They’re just offended that Trump is doing this! They’re offended that Trump is making the call.

In their world, some ogre like Donald Trump is not entitled to conduct foreign policy. That’s their territory. “The State Department, intelligence agencies, that’s what they do! Not Trump!” So this whole thing is manufactured, and Schiff is convinced that he’s gonna be able to characterize this phone call however he wants — and look what Schiff does. He goes and gets as “character witnesses” people from the military — which, the Democrats, they don’t like the military.

“You can’t criticize men and women who wear the Army uniform. (Sniff!) You can’t criticize people that wear the West Point medals. (Sniff!) You can’t dare disbelieve anything they say!” Except when Michael Flynn says something, we can put him in jail for it. He wore the military uniform. So did Pompeo. He’s a West Point graduate. So I’m telling you, when Trump released the transcript that blew their plan sky-high. So Plan B, asterisk 4, is Schiff doing this investigation behind closed doors.

That’s where they’re manufacturing stuff to counter the transcript of the phone call that Trump has released and made public. That’s why Schiff’s doing it with no Republicans and no media — that’s why he’s only leaking select sentences — because they’re lying, folks! There’s no other word for it! Schiff is literally making it up just like he did in public during committee hearing claiming that Trump was “demanding Ukraine make up dirt on Biden.”

Well, since none of what Schiff has been doing is real, since it’s all the product all of series of lies — and I’m not exaggerating. I’m trying to be as precise as I can. Adam Schiff has put together a series of lies that the media has helped pass off as fact, and the lies are really just exaggerated opinion. It’s all imploding because it isn’t real. Trump hasn’t done anything, and their effort to convince the American people he has was blown up when Trump releases the transcript.

So now here comes Pelosi, “Well, we might — we might even now have to go beyond Ukraine.”

Wait a minute, Madam Pelosi. I thought Ukraine was it. Russia wasn’t it. Stormy Daniels wasn’t it. Avenatti wasn’t it. Blasey Ford wasn’t it. “B-b-b-but this was it! This was it. This was the gold mine. This was the end of Trump.” Now it’s not? Now it’s not? Now we gonna go back to the Mueller report, obstruction of justice, 11 counts? (Gasp!) Well, in one sense, with impeachment they can go anywhere they want, but follow ’em. If she’s already talking about going beyond Ukraine, what that means is that they may have to dump Ukraine. You should go into this weekend not watching the media and feeling pretty good about this, ’cause I have no interest in lying to you about it.