Trump Finally Follows Me Out of New York!

RUSH: So I heard, like everybody else did, the tweet from President Trump last night that he was leaving New York, that he was making it official, he was going to relocate and establish — in fact, he’s already done it — his residence will be right here in Palm Beach.

And so the speculation began. He was very open about why. He said, “Look, I don’t like the way I’m being treated here.” You know, the people in New York, everybody that’s ripping him used to beg him for money, used to come by seeking his endorsement, wanted to be on his TV shows. And then he came out as a Republican and all of that ended. 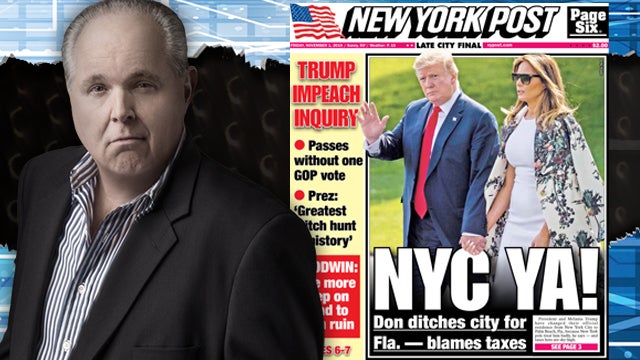 I can remember, I played golf with President Trump long before he was president. I played golf with him at Trump International here, and this is some years ago now. I left New York in 1997. I had come down here to Florida. It’s kind of a long story, but let me give you the briefs of it. When I started the radio show in 1988, just constant work, building the network, starting from 56 stations up to 600 in four years.

In the first four years I wrote two books and then the Rush Limbaugh TV show started. And all of my broadcast partners feared I had not taken any significant vacation time ’cause I was loving it. I was so into what was happening, it was a success track unlike any I had ever experienced. But my broadcast partners began to get worried I was gonna burn out if I didn’t take some time just to get away from it.

Roger Ailes had a condo in the vicinity here, and they got together, arranged for me to come down here on a weekend in February. It was around the middle, February 15th, Valentine’s Day or some such thing. And in order to get here I had to beat a New York City snowstorm. There was a 14-inch snowstorm on the way. And it started about 2 o’clock in the afternoon. My program ended at 3. So I had to hightail it to the airport and try to beat that snowstorm to get down here. And I did.

And I got down here and it was 85 degrees for the entire weekend. This condo’s on like the 24th floor right on the ocean. I’d never been in a place like that. I’d never stayed in a hotel on the ocean, I mean, really, really on the ocean where you could hear the waves, you could see the sharks, I mean, 24 floors up. And I decompressed like I didn’t ever remember decompressing. And by that, I mean relaxing.

I was out on the deck day and night, I was reading this and reading that, I was puffing away on cigars, it was just two or three days. I liked it so much I started coming back. Then I ended up purchasing a little place down here, intended it to be six weeks a year. And there was no way it was only gonna be six weeks a year.

And finally I made the call, once it all made sense to me on taxes. I was paying through the nose in New York state, city, federal, unincorporated business, whatever they can hit you with, they do. So sometime in the middle of 1997, I made the decision to move to Florida permanently. And my primary reasons were two: lifestyle and climate and escaping taxes. 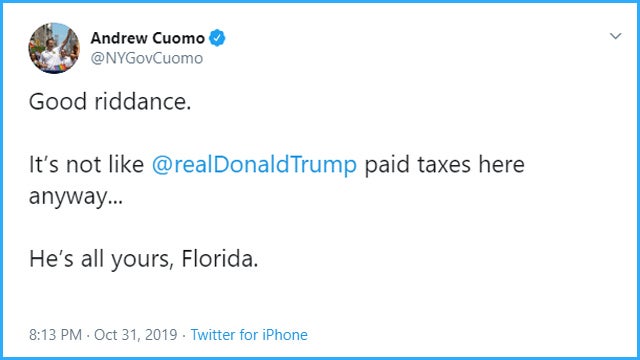 My parents told me never to talk about money, that it was not good manners, so I’m not gonna tell you how much money it saved me moving down here, but, trust me, you would be completely understanding why I did it. And when I did it — and I announced it for that reason — here came the critics. “You’re selfish. You’re trying to escape your civic responsibility.”

What do you mean selfish? I think it’s rather smart, for crying out loud, when I have an option not to pay that. Besides that, the people there don’t even like me. So I spent eight years in New York, did what I had to do there, and moved to Florida. And I remember, I wrote the tax authorities in Albany, and I informed them that I had moved and I sent them copies of my new Florida driver’s license. That was another reason. I loved driving. I couldn’t drive in New York City. For a whole host of reasons, I had to be chauffeured.

The first thing I did moving here was buy a car. I hadn’t driven one in eight years. It was something I really missed. So I’m tooling around, and I found a couple clubs that would accept me, just to join some clubs to prove that I was a resident here. One of them was the Governors Club. I forget what the other one was. I was doing anything I could to prove to those people that I lived in Florida.

Well, you know the rest of the story. I got audited the next 12 years. The New York state tax authorities audited me, and I ended up having to prove — and, folks, this is not an exaggeration. Every audit was for three years’ worth of returns. I had to prove where I was every day of the year 14 different ways: credit card receipts, computer IP addresses, flight and travel records, hotels. And even at that they thought I was lying and making it up. In tax disputes you automatically are guilty and you have to prove your innocence. They were subpoenaing employees and sweating them, trying to get them to say, “He doesn’t really live in Florida. He lives in his New York condominium.”

“He just has that place to try to escape, right? He’s here all the time, right?”

“No. No. He’s not.” But they were called in as witnesses. New York demanded to visit both of my residences to see which one was really the most lived in. And it went on for 12, maybe 13 years.

It was… (interruption) No, I did not spend in legal fees as much as I would have spent had I just stayed there and paid New York taxes. And I don’t know when the next audit’s gonna be, but they always happen. I think states like New York have divisions in their tax departments that follow people who move to no-income tax states. So if you move to Texas, if you move to Kentucky, if you move to Florida, I think they follow you.

Now, Trump said the taxes are not the primary reason, but I think they’re a big factor. He’s still gonna have to file New York taxes ’cause his business is there. But the inheritance tax is gonna be a big deal as well. I also think moving to Florida as part of a reelection campaign is a smart thing to do as well. My only point in telling you all this is once again, folks, your host, El Rushbo, is on the cutting edge. I was playing golf with Trump at his golf course back — oh, I don’t know — 10 years ago, 15 years ago.

And he’s asking me, “Why did you leave? What did you really leave New York? ‘Cause, you know, Rush, I’m hearing more and more people say they gotta get out, they gotta get out,” and I told him exactly what I told you. He said, “It’s incredible. Why are they hassling you like that?” “They’re not hassling me. They don’t like losing the money. They can’t stand losing the money, and they’re just trying to get as much of it as they can after you leave.”

He said, “I’m thinking about it. But I don’t know how I can. Everything I have is New York. It’s what I do. I don’t know how to leave. More and more people are talking about it.” This is 10 or 15 years ago. There is an exodus, and it’s not just from New York. It’s from other high-tax states — and don’t forget now with Trump tax reform, the state and local tax deduction limitation.

State taxes are now much higher for people in these high-tax blue states — and look at what they’re getting for it. I mean, the cities, in large part, are cesspools, and the income gap, the divide between haves and have-nots — middle class/rich, middle class/poor — is widening. I mean, everywhere you look, the evidence of out-of-control liberalism, unchecked liberalism is creating misery and disaster — and when people have the ability to flee it, they do.

The problem, as you know, is that when liberals flee, they take all the crap they believe with them to wherever their new location is, and they start corrupting that place. They start polluting that place with their liberalism. So liberalism travels. So I understand the president leaving. Of course, when I left, New York state authorities were mean and vicious and mocking. Grab audio sound bite number 2. In fact, I actually left New York in 1997.

But in 2009, in an effort to beat these endless audits, I sold a condo. I had a condo there, which I loved. I announced starting in 2009, “I’m selling that condo, and I am never doing another day’s work in New York,” because the deal I have with New York tax authorities is I owe them a minimum flat amount — and you wouldn’t believe how much this is.

If I show up and do this radio program in New York for three hours, one day, I owe them more money than what the average mean national income in this country is. So I don’t go. It’s not the money; it’s the principle of the thing. And that was 2009 when I sold the condo, because selling the condo, I thought, “This will convince them. I’ve got no place to stay there.” Didn’t work. “You could be hiding out in a hotel under an assumed name,” they said. Anyway, here’s my announcement. March 30th, 2009…

RUSH ARCHIVE: I told Mayor Bloomberg: I’ll be the first to lead the way. You know, this is just… I’ll sell my apartment. I’ll sell my condominium. I’m going to get out of there totally, ’cause this is just absurd, and it’s ridiculous — and it isn’t going to work. It’s punishing the achievers for the mistakes and the lack of discipline on the part of a bunch of corrupt politicians that have run that city and state into the ground for I don’t know how many years — and I, for one, am not going to take the blame for it.

RUSH: Okay, so, when I made the announcement official… See, the fact that I had moved beginning in 1997 was kind of under the radar. I didn’t make a big deal about it. But I did when I announced selling the condo and getting out of there, and here’s the governor at the time, David Paterson. He held a press conference. 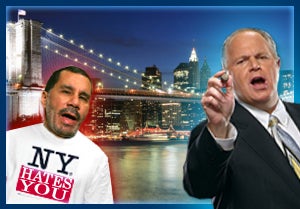 PATERSON: If I knew that would be the result, I would have thought about the taxes earlier.

RUSH: “If we could’a gotten rid of Limbaugh sooner, I would’a raised taxes sooner.” Well, this is what Governor Cuomo says. When Trump announces that he’s leaving, “Good riddance. It isn’t like Mr. Trump paid taxes here anyway. He’s all yours, Florida.” So you see, that’s all you are to them.

You’re just taxpayers. To liberal politicians, that’s all you are. You’re taxpayers and you’re votes for every two or four years. That’s all that you matter to them. I just want to let you know, folks, my name’s not any of these stories, but I was the beginning of the exodus and the state of New York, and there have been many more since. Don’t get talked about, but Trump made it public, so his is.