RUSH: Grab sound bite number one, speaking of whistleblower. This is NPR this morning, Morning Edition. They played a portion of a report by one of their reporters, Bobby Allyn.

ALLYN: Rush Limbaugh, online conservative publications and elsewhere, you know, really trying to out this individual. The individual’s name has been out there. It’s not been confirmed anywhere. And the whistleblower’s lawyers have not confirmed any of these reports. They also haven’t denied any of the reports. But here’s what we do know, that this whistleblower is from the intelligence community, and that’s basically it.

RUSH: What do you mean, haven’t denied any of his reports? Everything the whistleblower said has been denied because the transcript has been released. The whistleblower didn’t even hear the call. Here’s President Trump yesterday, White House lawn after his trip to New York City. Reporter said, “What would you like to know from the whistleblower?”

THE PRESIDENT: Certain of the media released information about a man that they said was the whistleblower. I don’t know if that’s true or not. But what they said is he’s an Obama person that was involved with Brennan, Susan Rice, which means Obama. But he was like a big — a big anti-Trump person, hated Trump. They know who it is. You know who it is. You just don’t want to report it. CNN knows who it is, but you don’t want to report it. And, you know, you’d be doing the public a service if you did.

RUSH: Now, Trump is right. Everybody knows who the whistleblower is. Folks, this is something else that’s interesting, tying in to the point I was making about how public opinion is shaped and then reported. There have been all kinds of publications that have mentioned the whistleblower’s name. He has been outed by any number of conservative publications. His picture has been published. He’s known. Everybody knows his name!

I was gonna run his picture last week, but I was told by our webmaster that it was a picture we didn’t have permission to run. Well, we do have one now from a White House state dinner. Put it up there, Brian. Put that picture up there. We’ve got a picture up for you if you’re watching the Dittocam — can we switch to that picture? In three, two — there we go. There’s two people in that picture, which one do you think is the whistleblower? I know it’s hard to distinguish them apart. 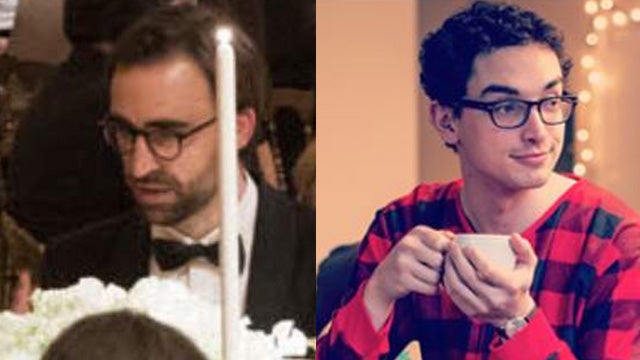 One of those two people is the whistleblower, folks. I’ll let you take your pick. His name is Eric Ciaramella. Everybody knows it. Everybody knows who he is. He worked with McMaster. He’s worked with Brennan. He’s worked at the CIA. He’s an Obama holdover in the Trump White House. He’s the guy that somebody told about the phone call. Then this guy called Schiff. The whistleblower called Schiff, said, “I got this thing here.” And Schiff walked him through it. I don’t even think that was legit. I think that was structured.

Grab sound bite number 4. This is Ken Starr this morning on American Newsroom on Fox. Question: “Do you agree with the president and his continued calls and demands for the whistleblower’s identity to be released –” He has been! His identity has been revealed. His name is known. Isn’t it interesting how it hasn’t been yet? Anyway, here’s what Ken Starr said.

STARR: I have taken the position that the whistleblower may have waived, with an — may have given up his or her identity secrecy approach if that person did, indeed, as we think she did, he did, went to Adam Schiff’s staff, I think that blows the cover. If that happened — and, I don’t know; I’m behind the veil of ignorance. I’ve seen reports that that did happen — then I think you’ve just lost your argument, whistleblower. 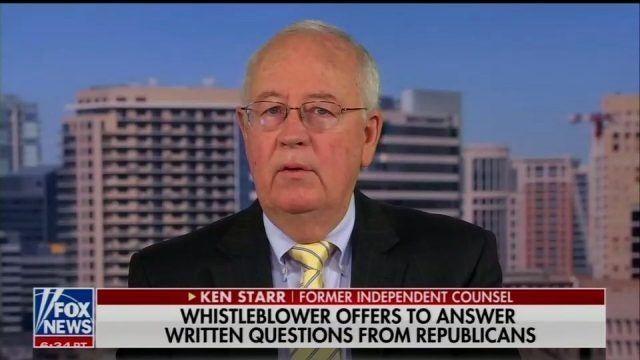 RUSH: Well, that’s exactly what did happen. Ken Starr knows it happened. Everybody’s couching this. Everybody knows the guy went to Schiff. He was told to go to Schiff. Schiff set this up! This is an Adam Schiff-run operation. He should have gone to the inspector general first. He should have never talked to Schiff until after the IG assessed the complaint and then passed it on. He went to Schiff first! And Schiff said, “Okay. What do you got?”

Schiff knew what he was gonna bring over there. They knew what it was. This guy was gonna have some bombshell about Trump’s phone call with the president of Ukraine. Remember, they never thought Trump would release the transcript. Then after Schiff coaches the guy and plans the battle plan, the action, then Schiff tells him: Now, you gotta get over to the IG, you gotta go through that process.

RUSH: Right here you have it, Washington Examiner: “’No further discussion’: Talks halt between whistleblower lawyers and Schiff staff amid expectation he won’t testify.” Not gonna testify, no more talks. The guy is not a whistleblower! He is a leaker! He was told about details. Told details in a phone call between the president and another foreign leader. We think it was Vindman who told him. He then calls Schiff.

He’s not a whistleblower! There’s nothing to blow the whistle on, other than Trump’s doing foreign policy in a way these people don’t like. He’s a leaker! And that’s why he’s not gonna testify.

Here is Chris, Lima, Ohio, great to have you on the EIB Network. Hello.

CALLER: Hey, Rush. Mega-insider dittos also from a Pittsburgh Steeler fan. Just real quick, it’s pretty clear what’s going on. Schiff doesn’t have anything and now they’re in full-blown panic mode. So now every little thing that they can trumpet out in the press to say that obstruction and all this garbage, it kind of reminds me of the death by a thousand paper cuts.

RUSH: You know, this is actually a very good description of what they are attempting. That’s what the Kavanaugh strategy was. They go through the initial hearings, and there’s a couple of references to maybe some crazy behavior, but nobody’s got anything. The last minute here comes Christine Blasey Ford supposedly against her will, she didn’t want to be outed, she didn’t want to be part of this, which we now learned is total BS, she savored it.

Then here came Avenatti, then here came the rape train, never ending. Death by a thousand cuts. Some might say a thousand pricks, pinpricks, what have you. And it’s the same thing they’re trying with this. It just never ends. There’s always gonna be the next thing.