Impeachment Network Finds They Have No Impact Where Real People Live

So last night on CNN they got a show called The Lead. The senior national correspondent, Kyung Lah, reported about what voters in Racine, Wisconsin, think about impeachment. And let’s see. We got three bites. Here’s the first one. 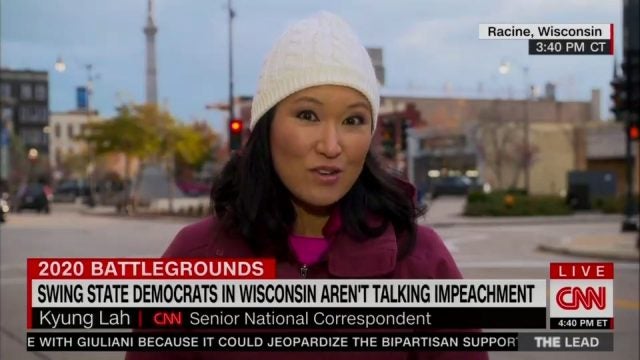 SARAH: It is not what you’re hearing at the coffee shop. It’s not what I’m hearing when I’m at the hardware store. 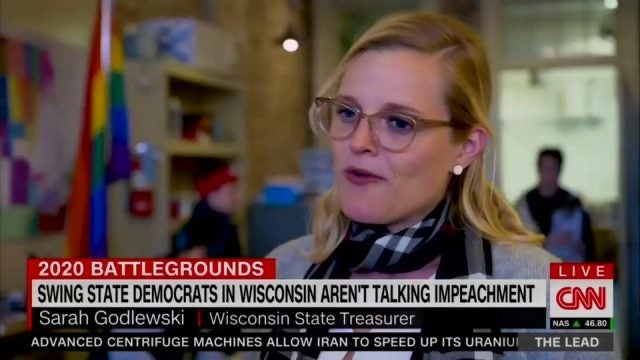 LAH: (voiceover/b-roll noise) We meet Democrat Bruce Dunn. Dunn cares most about the economy and healthcare. What about impeachment? You didn’t mention impeachment?

BRUCE: I kinda don’t like impeachment. You know the people that’s on his side, I don’t think they’re gonna jump ship because of it. 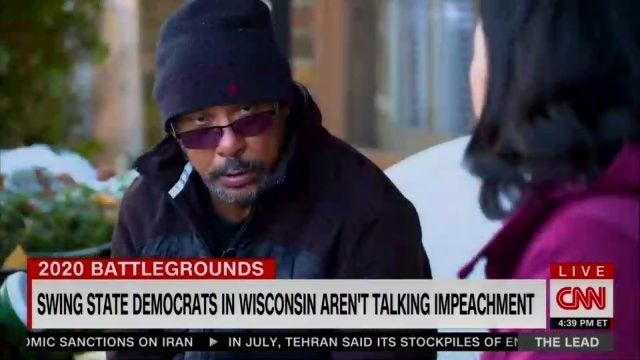 The Democrat Party — you’re gonna hear this in the bites coming up – the Democrat Party knocked on 50,000 doors this past weekend, you know, get out the vote efforts. Nobody brought up impeachment. Here is the second report from Kyung Lah, the senior national correspondent at CNN in Racine, Wisconsin, talking to other people. Let’s just listen.

LAH: (voiceover/b-roll noise) Unlike the Democrats, Wisconsin Republicans are talking about impeachment. 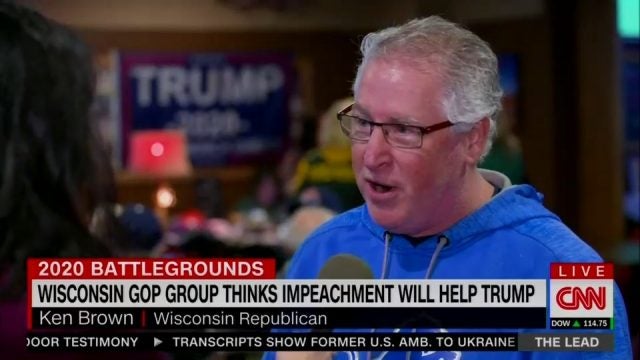 LAH: Is impeachment then helping you or helping the Democrats?

KEN: I think it’s definitely helping the Republican Party right now. I say go for it. Bring it on.

SALLY: We’re just digging in our heels deeper to fight what they’re going to do. And we will do it by voting.

RUSH: Oh, it’s just not going CNN’s way. They can’t find any Democrats that care about impeachment. The Republicans do, but because it is firing them up and they are saying, “Bring it on, it’s only going to increase voter turnout.” Here’s the next example. 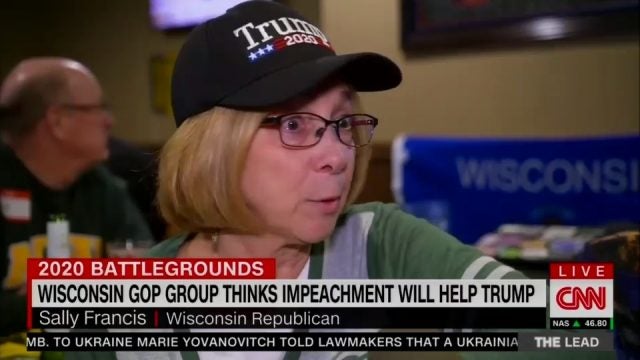 LAH: Wisconsin Democrats say they knocked on more than 50,000 doors just this weekend. That is double the number that Trump won the state of Wisconsin by in 2016. And here’s some instant polling for you. I asked the party just now, did anyone bring up impeachment? And they said no. It is not something that Democrats are bringing up organically.

Folks, let me make this personal. Let’s say that I, your host, got on a subject, and I didn’t stop talking about it for a year, over half you would be gone by that time, but I keep going because I’m obsessed and because I don’t care about my audience. I only care about getting rid of Trump. I only care about satisfying other people that agree with me.

And then I decide to go outside my studio. I decide to go somewhere and I get there and I’m expecting to hear all kinds of people pat me on the back and praise me and thank me and bring up impeachment, tell me how much they hate Trump, how much they can’t wait for Trump to go and how great a job I’ve been doing in helping get rid of Trump. And nobody says a word to me. 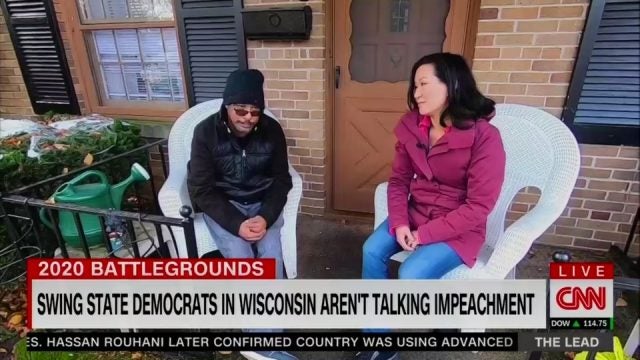 You know I’m gonna feel like? I’m gonna feel like I’ve been wasting my time. I’m gonna feel like, what, have you not been listening? They’re not even talking about it? I’m telling you, these CNN people have to be in a state of shock. And I mean psychologically. They have devoted the entirety of their network to getting rid of Donald Trump, regardless, be it Trump-Russia collusion, be it Avenatti, be it Stormy Daniels, be it Kavanaugh, you pick it, everything that has popped up, they’ve gone all-in.

They go out to Wisconsin. They can’t find anybody who’s talking about it. They encounter abject irrelevance. Now, they should know this is gonna happen ’cause they don’t have any audience. They’re a national news network basically piddling around with a million people tops. What are the odds state by state they’re gonna encounter anybody that watches? But I’m telling you, they’ll never report it this way, but they are devastated.

LAVANDERA: (voice over, b-roll noise) Cleo Petricek says she quickly saw growing tent camps popping up under the highways near her home. She’s fed up with the way city officials are fighting what she sees as a crisis. 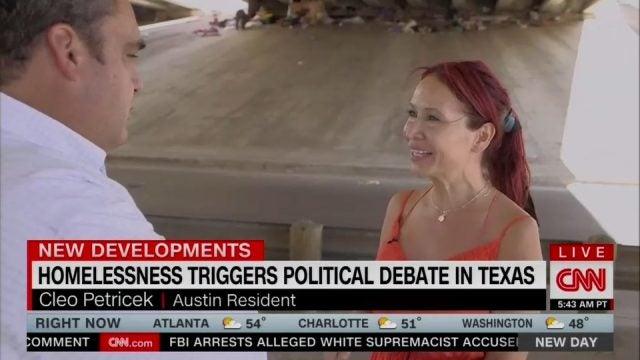 CLEO: Homeless is not a crime. Absolutely it’s not. But the behavior behind it that you see when it increases to, you know, recklessness, aggressive panhandling, actively using drugs and drug needles. Look, there’s a drug top right there.

LAVANDERA: Do you think Governor Abbott is helping here?

LAVANDERA: (voice over, b-roll noise) Cleo Petricek is a self-described liberal who has never voted for a Republican. She says it pains her to welcome Governor Abbott’s tweets. 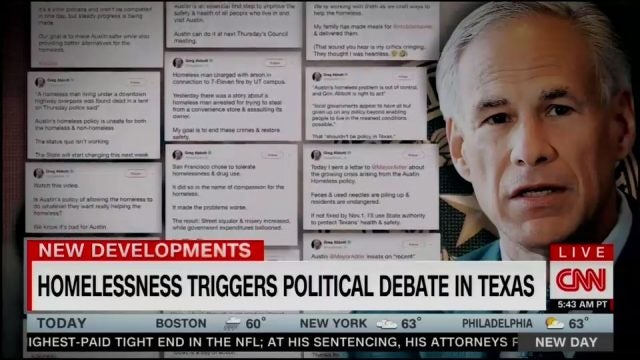 CLEO: (on camera/outdoor noise) Somebody’s listening to us because when it comes down to it, we all live here.

RUSH: What have I said? Folks, remember when the Democrats started their campaign and all of them were on a debate stage, 23 of them the first debate stage, and homelessness did not come up, and the city leaders in Los Angeles said they were mad. They expected the Democrats to talk about it. And I told ’em you’re crazy. The Democrats are not gonna talk about anything going on in California because you already own the state. They’re not gonna focus on anything you care about because it’s your fault.

He’s tweeting about it, and she reluctantly says it’s good because nobody else is! This is a classic line. “Lavandera: ‘Cleo Petricek is a self-described liberal who has never voted for a Republican. She says it pains her to welcome Governor Abbott’s tweets.’ Petricek: ‘Somebody’s listening to us because when it comes down to it, we all live here.'” Democrats don’t want to talk about it. Austin is a Democrat city. The Democrats are not gonna talk about it, like they’re not gonna talk about it in LA.

They’ll not talk about the human feces piles in San Francisco or any of that stuff. But the people in Austin and in LA, skid row, San Francisco, have to live with this stuff. And, frankly, they’re getting tired of hearing Donald Trump blamed for it. He’s got nothing to do with it, nor does any other Republican. Meanwhile, tune in CNN any day, what do you hear? “Trump’s bad. Trump’s gotta go. Trump’s being impeached” and so forth.

Meanwhile, they can’t find anybody in Wisconsin, in Ohio, in Florida — they can’t find any Democrat — who cares. They have to bring it up to them. Folks, I am telling you what the media, NBC and CNN… What they have encountered this week, they will never share with you. I mean, the people at NBC were mouth-wide-open kind of shocked. Al Joker and his crew on the Today show after they heard the sound bites were shocked and surprised, but they’re not gonna talk about it.

But I’m telling you, they are questioning everything they’re doing. They can’t find any evidence that they are persuading people, and all they’re doing is going wall-to-wall with it. This is the kind of stuff that can destroy egos. The media egos — do not doubt me — are as fragile as a balsawood home. They live in this world where everybody loves ’em and everybody hangs on every word and they’re all powerful. They’re primary influencers.

And they go out where people actually live and find out they’re not even factors.

It disturbs them greatly.