RUSH: Mike Pompeo sent a tweet out yesterday afternoon about 41 minutes after this program ended. “Today we begin the formal process of withdrawing from the Paris Agreement. The U.S. is proud of our record as a world leader in reducing all emissions, fostering resilience, growing our economy, and ensuring energy for our citizens. Ours is a realistic and pragmatic model.” 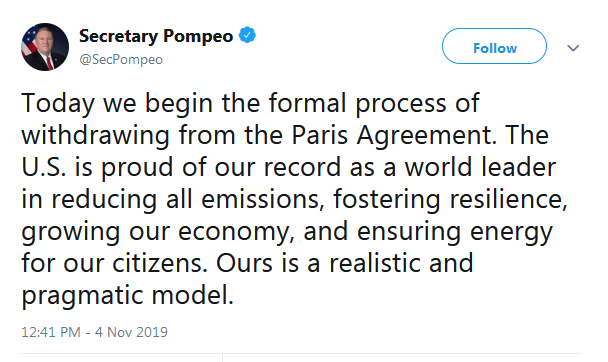 The ChiComs said “(Raspberry!) We’re not going along. We’re not having anything to do with it.” India, same thing. It’s toothless, it’s meaningless, it’s purely symbolic. But if you did go to the Paris accords, if you make the pledge to reduce CO2 emissions by 1,000% in 10 years, you’re expected to do it. But there’s no requirement that you did it. It’s a toothless agreement. It’s nothing more than a PR scam. Trump pulled us out of it, and only yesterday was it made official.

From TheHill.com: “Trump Formally Pulls out of Landmark Paris Climate Agreement.” There’s nothing “landmark” about it. It was just a meaningless, unenforceable piece of paper. The Paris accords are platitudes. Fracking delivers actual results when it comes to reducing CO2 output. Trump rejected the Paris accords and embraced fracking like any thinking person would. The ChiComs, India, are big time polluters. I’m not just talking about CO2, even though they pump that out in quantities that you can barely measure.

The United Nations, if it were a legitimate problem-solving entity, would have one priority, and that would be pressuring China and India to clean up their messes. But, oh-ho no! Nobody’s gonna go tell Xi Jinping what to do because they might not survive the meeting. That’s never gonna happen. Nobody’s gonna tell the ChiComs what to do. They’re scared to death of the ChiComs, ’cause the ChiComs don’t care if you die.

They don’t care if you die because they kill you. They don’t care about anything that’s gonna happen to you. Speaking of which, grab audio sound bite number 23 just to get this in. Jane Fonda this morning was on The View. The cohostette, Abby Huntsman, said, “You were arrested for your climate protest. Is there a way to do it,” meaning protest, “without breaking the law? You think of all the peaceful protests that have led to change. I worry about living in an uncivil society.” Whoopi Goldberg pipes in on this bite, too.

FONDA: Climate activists have been doing this for 40 years.

FONDA: We’ve been writing articles and we’ve been giving speeches. We’ve marched and we’ve rallied peacefully, and the fossil fuel industry is doing more and more to harm us and our environment and the — our young people’s futures.

FONDA: We have 11 years to avoid catastrophe! (crosstalk) We are the last generation —

FONDA: — who can make the difference.

FONDA: — between life and death of the planet.

RUSH: This is why so many kids are committing suicide. 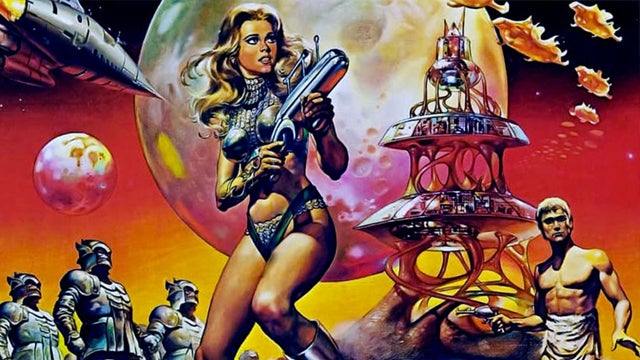 These people are literally poisoning — they are destroying — young people’s lives by creating this fear that the planet will not support human life in 11 years, now. Forty years, they’ve been on this — 40 years — and nobody’s buying into it in a majority sense. So they have to get more and more radical. In those 40 years, the next 10 years were the end. So at least four or five times in the 40 years, we’ve only had 10 years. We have survived four or five 10-year threats, and we’re no nearer destruction than we have ever been because we are not near destruction because of climate in any way, shape, manner, or form.

RUSH: I want you to try, folks, and savor these moments. These are the kinds of things that we have thought we were going to get electing Republicans not just the presidency, but various other political offices for many, many years. We haven’t gotten it except from Donald Trump. Pulling out of the Paris accords is exactly one of these items to savor. Don’t take it for granted. It is a slap in the face to the establishment. It is standing straight up in their face and telling them that it’s a new day.

This is exactly what you’ve been voting for if you’ve been voting Republican, and it’s not a small deal. It is a big deal. “But, Rush, I thought we pulled out a year ago.” Yeah, yeah, but formally doing it — actually following through and doing it — is something that we’re not used to. We’ve gotten lip service on a whole lot of things over the years for decades. But the point is, these are things to appreciate. They are things that are worthy of your continued support.

CALLER: Really great, Rush. It’s an honor and I’d like to thank you and all your staff for bringing the truth to America, what a job you guys do every week.

RUSH: Thank you very much, sir. We all appreciate it. 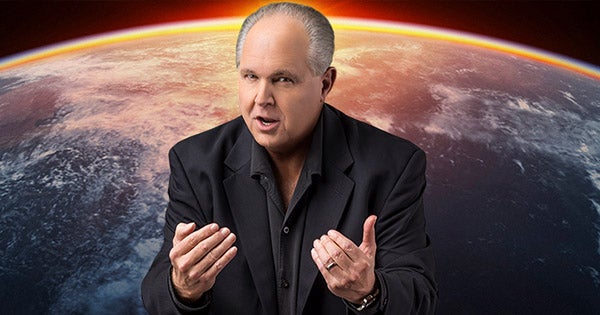 CALLER: Real quick, Rush, I’m 60 years old, I’m retired, I’ve got four children, they’re all Millennials ages 26 to 35, and in 2020 when they go to the voting booth it’s not gonna be based on social handouts or going green or climate change or all these phony investigations. It’s gonna be based on two things, Rush. It’s gonna their wages and 401(k).

RUSH: Wait. Ho-ho-ho, whoa, whoa, whoa. I just want to make sure I’m understanding this. You’ve got how many kids that are Millennials?

RUSH: Okay. So, yeah, that’s the top range of Millennial. And you’re saying that climate change and all that other gook, that doesn’t matter. That their vote is gonna turn on their 401(k)s and their wages?

CALLER: Right. And Donald Trump (unintelligible). Because a recent study has 40 million people are on pace to outlive their 401(k)s. I got stuff my kids will never have. I got a pension. I worked for the Department of Corrections for 26 years. I get a monthly pension ’til the day I die. The children, they got their 401(k), unless they’re making a wage, unless they’re making money at the end of the week to put away for their investment in the future, they’ll be part of those 40 million Americans that are back at age 75 working at Walmart.

RUSH: Okay, I’m having trouble keeping up. You’re saying that your kids know they’re not gonna have a pension like you have so they’re investing and making sure their 401(k)s are strong. Is that your point?

RUSH: All right. Now, how did they learn this? How did your kids escape the indoctrination that the world isn’t gonna be here by the time their 401(k)s would be cashed in? How’d they escape that? Climate change. How’d they escape being concerned about that?

CALLER: It’s not that they’re not concerned. It’s just that — we’re talking the Millennials here. This ain’t unique to my four kids. This is coworker’s friends. This is just the way they’re thinking, it’s their pocketbook, it’s what’s going on in this world. There’s a lot of things they have control of, they don’t have control. But having a president that is making them money and making investment in the future with a job —

RUSH: Do they think that those things are happening because of the Trump presidency?

CALLER: Absolutely. I mean, since Trump — what’s the net worth, three or four trillion in net worth for Americans since Donald Trump became president. I don’t think it was because of Obama.

RUSH: No, look. You’re obviously telling me what you think, and then you’re also saying your kids think this. And your point is that you’ve got four Millennials, and they don’t fit the image that has been painted for us by media that Millennials are simply a bunch of people that love socialism, can’t get enough of it, want more of it, even some of them like communism, and that the main thing on their minds is climate change.

If your kids do not fit that mold, then you have to have played a role in the way you raised them. And for that you deserve kudos. I’m sure they’re old enough now to conclude some things on their own as well. Anyway, he’s trying to say, don’t buy this garbage they’re telling you about Millennials based on his four kids.

RUSH: Lynn in Elko, Nevada, great to have you.

CALLER: Hi, Rush. Thank you for all you do for us out here in Nevada. Democrats say that they’re so concerned about climate change, but now with all the fires burning in California, we noticed they had no problem running out and buying gas-powered generators to run their businesses and homes, and they didn’t care about all the pollution that’s going into the environment from running it. That’s a perfect example of Democrat hypocrisy.

RUSH: You know, that’s a great point. Not just gasoline-powered generators. Some of them had to go out and rent gasoline cars because they can’t charge their electric vehicles!

CALLER: That’s what my husband commented on. The Teslas. You know, they can’t run their cars, they can’t do anything, and they’re just all complaining. 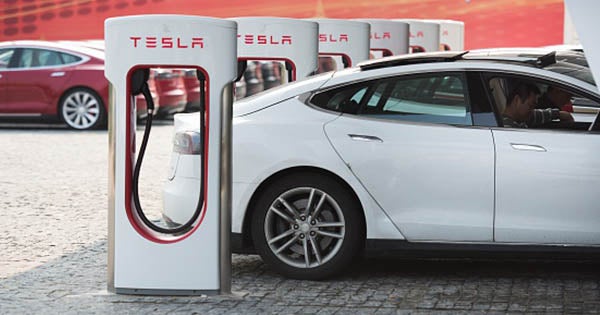 RUSH: You know, these people vote for this. This is the crazy thing. This is the power of influencers to get people to vote against their own self-interests. For example, in California they’ve touted, “Climate change is destroying the planet. We’re our own country. Screw the United States. Screw immigration law! If they don’t go along with the Paris accords, we’ll do it ourselves.” They get everybody buying electric cars. Then they prevent clearcutting so the forests in California are basically kindling.

They can’t even clear-cut near electricity power poles, and then a downed power line causes a fire. So they’re having these rolling blackouts of a week to 10 days where people are losing electricity. Meaning: They can’t charge the electric cars the state’s been encouraging them to buy to save the environment while the fires are putting all kinds of filth in the environment.

RUSH: What is their solution? As you say, they go out and violate every supposedly heartfelt belief they have: Gasoline, fossil fuels. Why? To survive.

CALLER: That’s right. We used to live in California about 40 years ago, and we left. We decided to move to Nevada. Unfortunately, that’s turning into California. So we’re not too happy about that. But hopefully… We’re Trump supporters, and we appreciate what Rand Paul said. We hope more Republicans go out and talk and tell the world that the president is doing a great job. That stuff is ridiculous they’re doing to him right now.

RUSH: I’m glad you called. Thank you very much.