All of a Sudden, There Are Whistleblower Lookalikes Everywhere!

Then there’s a picture of the whistleblower in the White House, outside the White House as Obama’s making some speech after Trump had won the election, these people are standing next to Susan Rice, they’re looking dejected, they’re looking despondent, some of them looked angry. The whistleblower’s in the picture. I see this guy on Fox, don’t know who he is, dead ringer for the whistle blower.

They’re manufacturing whistleblower mannequins. It’s unreal to me that I’ve been able to spot 10 people in the last week that looked just like this guy. No, no, no. I gotta take a break. Don’t misunderstand me. I’m talking about the lack of individuality among these young people. It’s striking to me. We can stereotype these people, these young, leftist Pajama Boy guys that end up working for people like Obama and Susan Rice and John Brennan.

RUSH: Now, folks, I’m just sharing observations. I am not saying there’s anything to it. I just… I notice things. I’m a highly observant person, and I sometimes share these things that I observe, and I am literally blown away by how many young men all of a sudden seem to look exactly like this whistleblower looks. Nothing to it. Just something that I’ve observed. As I said, we’ve got the picture of the whistleblower. 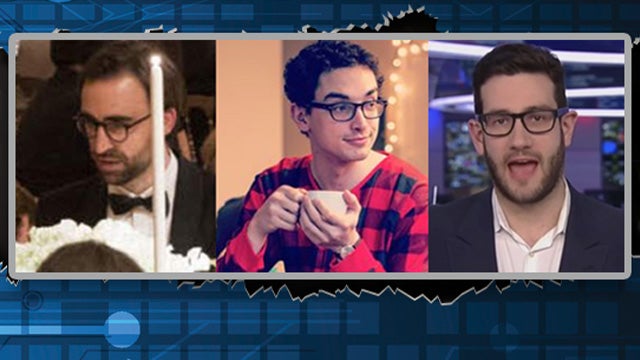 He’s a dead ringer for the Pajama Boy that ran in the ad for Obama health care, Thanksgiving around two thousand… What would it have been, ’12, ’13? No, ’09 or ’10, something like that. Then last week somebody sent me a picture. “Look at this, Rush! This whistleblower’s meeting with Schumer, he’s meeting with Pelosi, he’s meeting…” And it looked like a dead ringer for the whistleblower. It was George Soros’ son. Then there’s a picture of somebody that looks like the whistleblower standing next to Susan Rice or nearby her.

A photo of Obama staff members listening as Obama speaks to them after the election, saying he wishes Trump well — and these people look like they are ticked, mad, depressed, all of it. And the whistleblower is ostensibly there. It’s gotten to the point now that when somebody tells me, “This is the whistleblower,” I don’t believe it, ’cause I’ve seen seven or eight other people look just like the guy. I just saw another one on Fox. I don’t know who he was or what he was doing.

I just say, “My God, do they all look the same? It’s like a bunch of robots out there.” I said, “What is…? This many people with the same facial-hair sculpture and design, hairstyle, glasses, face shape?” It’s just something I’m observing. It doesn’t mean anything. There’s no allegation here. There’s no accusation. I’m just… We always hear about stereotyping people and so forth, and I’m just wondering if there isn’t…

I’m just gonna keep it at the observation.

RUSH: Okay, folks. I hear you. I hear you. I’ll go there. Some of you people are so smart, I have to give you credit. I just checked the email during the break. “Rush, you can’t fool us. You’re not just observing that all these guys look like the whistleblower. You always have a reason for observing something, and you just don’t want to tell us.”

Other emails are saying, “When do you start chickening out telling people what you think?” I’m not chickening out here. Okay. I will explain the thought process. Just to repeat, if you’re a welfare recipient, if you’re on skid row in LA just getting up, I made an observation that this whistleblower guy, the spy, I am stunned.

I just saw another one on Fox. Somebody being interviewed, don’t know who he was, don’t know anything about him. It was happening while I was speaking to you. I’m looking, thinking to myself, is that the whistleblower on TV? And I said it can’t be. So here are the things that I’ve observed. What is it about these guys that all looks the same? Sameness in physical appearance.

I’m sorry, folks, that’s something I notice when people are not twins and they look alike, that’s not common. These guys are all rail thin. They are tiny. Well, I don’t know how tall they are. But they are rail thin. They all have identical looking glasses. They all have the same goatee mustache type thing. Every one of these seven or eight people I’ve noticed.

The people who I have thought were the whistleblower are all highly educated. They all come from the creme de la creme of academe. You put a picture of George Soros’ kid that I mistook for the whistleblower last week, you put him side by side with the whistleblower and I guarantee you you’re gonna see what I’m talking about. Then this guy on Fox just minutes ago.

So these are leftist kids. So what does that mean? Well, it’s possible that these are all young men who have grown up with no sports, have been vegan or vegetarian oriented diets thrown at them, eat a lot of tofu and soy, they have been indoctrinated during the chickification of the country. They look like wusses. They look like the Pajama Boy ad that Obama ran for health care. And they seem like they’re popping up like rabbits out there.

And if you combine all this with the chickification of our culture, you look what’s happening on college campi, more and more men are not going, they feel ostracized, they show up there and become targets. They are mistakenly accused of rape, perhaps, they have newspaper stories written about what a bunch of brutes and just predators that they are. These guys don’t look like brutes, they don’t look like predators, they don’t look threatening in any way.

What did he hear on the phone? Heard a real man talking to another man on the phone. Donald: Hey, do me a favor, we need to get to the bottom of this crap that’s been going on against me here and I need your help.

You wouldn’t even find these guys referring or umpiring a softball game. Too violent. You mean you’re going to hit that poor ball? My God. No. They all believe in climate change. I mean, they’re cookie cutters. Like TV anchors. It wasn’t that long ago they all looked like Ken dolls. Or televangelists, look at those guys, coiffed hair, they all look identical. I’m just saying.

By the way, not everybody is into this Veterans Day today. Daily Wire has a story. “On Monday, the University of Virginia, founded by Thomas Jefferson, will celebrate Veterans Day, but unlike the last ten years, will not hold the 21-gun salute portion of its ceremony.”

It’s too threatening, see? And I’ll bet you the Pajama Boys, the whistleblower type guys are very happy that no weapons will be fired even symbolically because it signifies and symbolizes violence. I’m not making it up. University of Virginia will not hold the 21-gun salute portion of the ceremony because it glorifies guns. I don’t care what anybody says, this is not the mainstream.