RUSH: Ronna McDaniel, the Republican National Committee, tweeted just before the program today about the internal polling that they’ve been doing at the RNC. And I’ll just tell you what it is. You can decide whether you want to believe it or not. She says, “We’ve been polling our 2020 target states each week, and since Pelosi’s charade started: *@realDonaldTrump’s approval is up *opposition to hearings among DEMOCRATS is up 6 pts.” 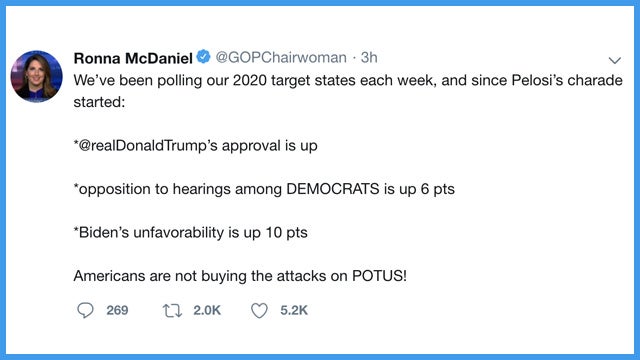 This is Republican RNC internal polling where she says Democrat opposition to the hearings is up six points, that Biden’s unfavorability is up 10 points, and she overall concludes that Americans are not buying the attacks on the president.