Trump Takes It to Obama at the New York Economic Club

RUSH: Here’s Donald Trump, New York Economic Club today. By the way, this place, the New York Economic Club’s a famous Economic Club. This is where John Kennedy made his famous tax cuts speech back in 1962. And it sounded Reaganesque. Just a little trivia for you. Trump gave this speech today shortly after this program began. We have a few bites, and here is the first.

THE PRESIDENT: Under the last administration, nearly 200,000 manufacturing jobs had been lost, almost five million more Americans had left the labor force, 10 million people had been added to the food stamp roles. The so-called experts said that America had no choice but to accept stagnation, decay, and a shrinking middle class as the new normal. That was said all the time. In short, the American people were told to sit back and accept a slow, inevitable decline. But I never believed for one moment that our magnificent nation was destined for a diminished future.

RUSH: Oh, this is cool. Trump’s taking it to Obama on the eve of impeachment, on the eve of the impeachment show, Trump is taking it to Obama. “The so-called experts said America had no choice but to accept stagnation, decay, and a shrinking middle class as the new normal. That was said all the time. In short, the American people were told to sit back and accept a slow, inevitable decline.” 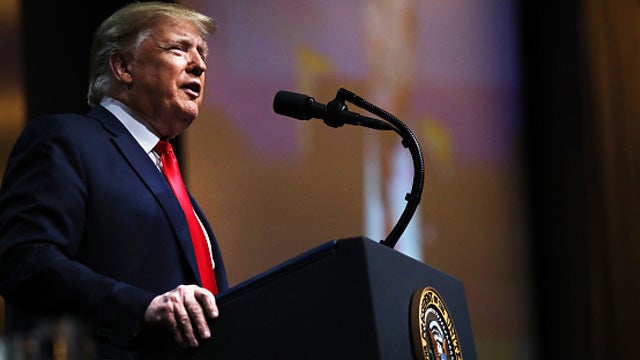 This is what young people are being taught in universities, what they’re being taught in high school. It was what Obama was saying as part of his message. Economic growth was a paltry 1%. When that happened, it was time to celebrate. But Trump is not exaggerating here. And now he points out that he changed all that.

THE PRESIDENT: In 2016 I stood before you supremely confident in what our people could achieve if government stopped punishing American workers and started promoting American workers and American companies. I knew that if we lifted these burdens from our economy and unleashed our people to pursue their ambitions and realize their limitless potential, then economic prosperity would come thundering back to our country at a record speed. Today I’m proud to stand before you as president of the United States to report that we have delivered on our promises and exceeded our expectations by a very wide margin. We have ended –

THE PRESIDENT: I almost didn’t get it. 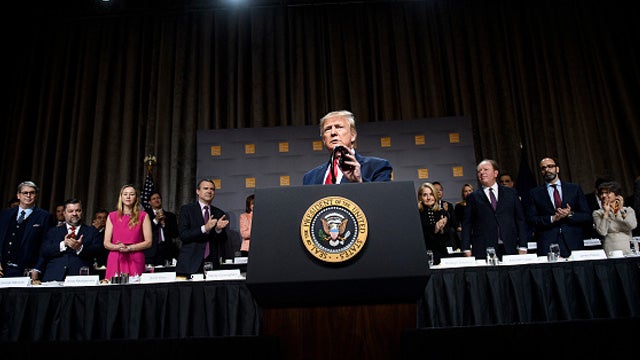 THE PRESIDENT: Nearly 2.5 million Americans have risen out of poverty. The rate of African-American and Hispanic-American families in poverty has plummeted to the lowest level ever recorded by far. 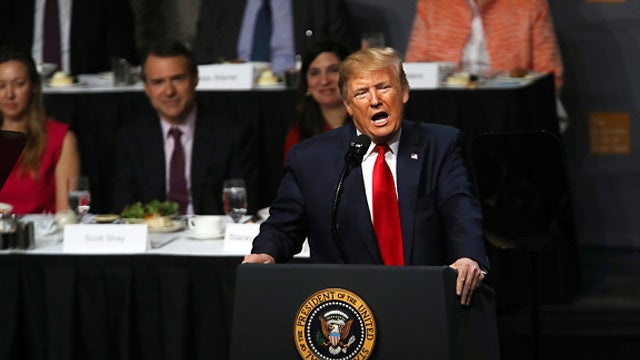 RUSH: Right on. Right on. By the way, it’s enemy territory. The New York Economic Club. These people don’t know where to go. They don’t like Elizabeth Warren. They don’t like Plugs. They think Plugs may be safer because he’s more malleable and will be more out of the way. They are begrudgingly applauding Trump here. But everything Trump is saying is dead-on right.

African-American, Hispanic unemployment, record lows, record lows since we began keeping those records. Six-hundred-thousand new manufacturing jobs, Obama said — and he was in Indiana when he said this. He was making fun of Trump. (doing impression) “What’s he gonna do? Wave a magic wand? Yeah. Bring those jobs back. I hate it to tell you, those jobs aren’t coming back. Those jobs are gonna be replaced by new kinds of jobs, robots and all kinds of things, but they’re not coming back. What’s he gonna do? Wave magic wand?”

THE PRESIDENT: We withdrew from the one sided, horrible, horrible economically unfair, close your businesses down within three years, don’t frack, don’t drill, we don’t want any energy, the horrible Paris climate accord that killed American jobs and shielded foreign polluters was a disaster for this country. You’re talking about trillions and trillions of dollars of destruction would have been done to our country with the Paris climate accord. And it is so unfair. It doesn’t kick in for China until 2030.

RUSH: And they’ll ignore it even then because they were just half-baked signatories to it. So this is classic Trump. Now, he delivers this not in a fire and brimstone way. He just very methodically plunges in, reminds these people what all he has done on the eve of this bug-eyed little nerd from California trying to force him out of office. I like it. I like it. It’s great, great positioning.

On the one hand you’ve got substantive, applied economic principles resulting in a revitalized and growing American economy. And over here you’ve got some lying little sack of excrement trying to run some impeachment show to overturn the election results of 2016. Now, I’m gonna remind you again. And don’t think this doesn’t matter.

Somebody in a sound bite earlier today — it was Bret Baier. It was Bret Baier, he was asking Harold Ford. How does all this impeachment stuff play into the 2020 Democrat presidential primaries? And it’s a great, great point, because it doesn’t! These people on the campaign trial — Pocahontas, Plugs, Bernie, Mayor Pete, they’re trying to talk about things that people vote on, like jobs, Medicare for All, massive tax increases, all the things they believe in.

Now, I resent that the idea of government is to do things for the American people understand. But on this I have to acknowledge that a lot of people look at government that way and the Democrats are doing diddly-squat. They’re paying zip, zero, nada attention to the economy, jobs, to prescription drugs, to health care, whatever it is in matters that are really important to the American people. The Democrat is wordless. They are absent. It’s all impeachment show all the time.

Meanwhile, here’s Trump at the New York Economic Club, substantive economic achievements and accomplishments, rattled off one right after another. It’s an interesting contrast. The Democrat Party has become vacant. They have become poisoned with the hatred that they have. They are not even making a phony effort at making voters think that they have any interest in them.

The Democrats are engaged purely and solely in things they care about, and they’re using public money to do it. And they’re hanging their presidential candidates out to dry. It’s so bad for the presidential candidates, they’re looking for alternatives, like Hillary, like Bloomberg. It is a mess. Do not think these people are winning, my friends, because they are not.