What Are Democrats Trying to Accomplish?

RUSH: This is Deion in New Orleans. Great to have you on the EIB Network. Hi.

RUSH: The Democrats had all kinds of stuff with Kavanaugh and Mueller.

CALLER: I’m talking about as far as anything coming out at the end, and with the impeachment thing they have nothing.

RUSH: Well, it’s not entirely true, they said damn it to hell, and they moved on to the next one.

CALLER: Yeah, well, we should demand our $25 million back. But as far as impeachment, too, they have nothing. Why they keep this going and bringing in all these new people to question is because they’re hoping to find something. Not only that, they spend 24/7 every minute of the day thinking about this. But they’re (unintelligible) one minute on is immigration, health care. Our cities are becoming toilets. The crime is out of control. Drug abuse is rampant. The USMCA. Infrastructure. 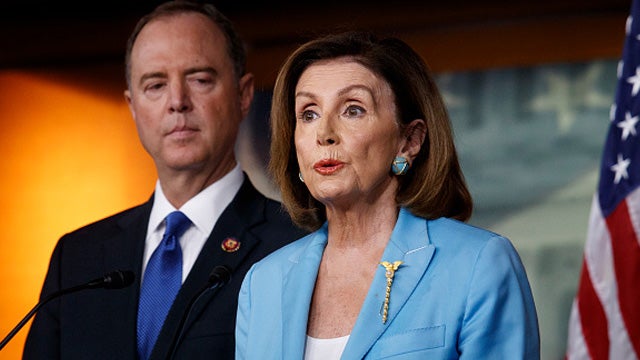 CALLER: But, Rush, we see it. We see this. I would put President Trump’s three years of accomplishments against all —

RUSH: Yeah, but you voted for Trump in the first place, right?

RUSH: All right. So we would expect that you would notice it. We’re looking for Democrats to notice this. And according to RNC internal polling, they are. Look, I got a question for you. You pretty much said they’re not gonna accomplish anything, so why are they doing this, do you think?

CALLER: Because Trump is getting very close to breaking up swamp. It’s gonna take another 10 years because these people are so embedded with each other, there is daily corruption gone on —

RUSH: Okay, okay, that’s a good answer, it’s a good answer. A serious question. I don’t care what you’ve heard, there isn’t anybody anywhere in Washington that thinks the Senate would ever vote to convict Trump. So they can’t remove him from office. No president ever has been via impeachment. Pelosi knows this.

So what are they doing? What is Schiff’s agenda? He doesn’t need to do this to get reelected. He’s in a safe district in Hollywood. So why are they doing it? There’s an answer. I’m not asking a question I don’t know the answer to, but what is the purpose of this, then?

RUSH: What are they trying to do? You may have heard me answer the question. If the odds of removing the president from office are so, so slim as to be improbable — short of impossible — then what is the game here? Our previous caller from New Orleans got very, very close to one aspect of it. A lot of this is the Obama FBI/DOJ trying to make sure nobody finds out what they did in starting this whole investigation into Trump.

By the way, speaking of which, I just was made aware of the following tweet from Senator Grassley, and he’s very suspicious that we don’t have this IG report on the FISA investigation. This thing is months delayed. We’ve been told this report’s coming by the end of the month for four months in a row now. Grassley tweeted, “If FISA Inspector General Horowitz report doesn’t come out next week when they said it would then I will be very disappointed & left to wonder WHAT THE GAME IS??

“Is someone at FBI or DOJ tying IGs hands??” It’s a damn good question, because this report has been rumored to be already finished and on the verge of being released — and I’m not exaggerating — for months! It was gonna come out in May, and then (impression), “No, it’s gonna come out later. We can’t put it out before Durham and Barr finish.”

And then it’s been delayed every month when they promise it, and he’s getting suspicious that somebody’s trying to hold it up and not get it released. I think he’s absolutely right to be suspicious about it. So that’s, in part, what they’re doing. But in another sense, folks, it’s no more complicated than they just hate the guy. They just hate the guy, and no matter what the odds are they’re gonna try to get rid of him. They’re gonna try to make these hearings such that you want him thrown out.

That’s what they’re trying to do.

They’re trying to disgust all of you.

They’re trying to make all of you believe that this guy is the biggest criminal in the country, and he’s getting away with everything. That’s what they’re trying to do, even though they’ve had to lie about virtually every allegation. I think they’re on such inertia now they can’t stop it. They were so convinced that Mueller was gonna have the goods — they were so convinced — and none of it’s ever been real. Psychologically, this defies explanation of sane people. It literally defies rational explanation.

There’s never been anything. There’s never been any evidence of anything. The whistleblower never heard the phone call. The whistleblower’s not testifying. The Steele dossier was actually not even written by Steele. Lee Smith’s book… Lee Smith’s book makes it clear the dossier was actually a series of mini-dossiers written by Glenn Simpson at Fusion GPS, and they just slapped Steele’s name on it to give it some credence with the FBI or the FISA court — ’cause he was a former MI5 in good standing with the FBI.

But Glenn Simpson manufactured it.

Fusion GPS, people that were partnered with Hillary in all this.