CNN Can’t Come Up with a Blockbuster Headline

RUSH: This Bill in Buffalo. Great to have you, sir. Thank you for calling.

CALLER: Thank you, Rush. Don’t the Democrats realize that President Trump didn’t even intend any quid pro quo, bribery or extortion, and that no reasonable prosecutor would even bring such a case? It sounds — 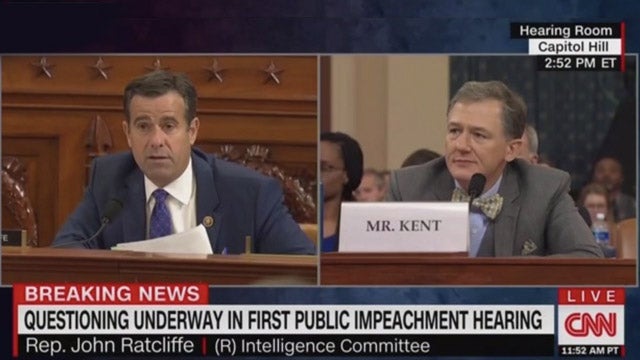 CALLER: It sounds like the Democrats care more about digging up dirt on their political rival, President Trump —

CALLER: Yeah, they’re digging up more on President Trump through hearsay, and they care more about that than legislating for the benefit of the American people.

RUSH: Oh, there’s no question that that is a great point to make. They’ve set everything aside and they’re using taxpayer dollars for their own political purposes. But, you know, the question you ask: Are the Democrats hoping to make…? What are they really doing here? What do you think…? We know how full of holes all this is substantively, and we know that as a TV show there’s nothing compelling, there’s nothing magnetic, there’s nothing that people cannot tear themselves away from here. This is not anything like it was hyped up to be. So what are they doing? In your estimation, Bill, what’s the purpose here, and how are they going about it?

CALLER: I think they’re trying to influence the people that may not have the intelligence nor the perspicacity to realize what’s going on here. And like you said before so well, Rush, they probably want to try to influence a few Republican, weak RINOs to kind of go along to their side.

RUSH: Yeah. I think that’s the objective. I think they’re going after low-information voters, trying to make ’em think something happened here by dazzling them with all of these really super professional diplomats — and whatever number of frightened, scared Republicans can be had. But they’re doing it with what? What do they have here, Bill?

CALLER: It doesn’t seem like there much there, sir. (chuckles) I don’t know. (unintelligible)

RUSH: Based on… They’ve got nothing! My point all along from the beginnings of this is there has never been anything. The Steele dossier was it, and that was manufactured and made up, and we know how they used it. We know that it’s option research, Hillary campaign — and now the phone call. The phone call is this issue’s dossier, and they’re having to make up… Just as they did in the dossier, they’re having to make up what was in that phone call — despite the fact there’s a transcript of it. They literally have nothing.

It’s a heck of a realization. They’ve got nothing. They are reduced here to continuing to try to create this grand image or illusion of Trump criminality, malfeasance, unfitness, whatever it is. They’re literally — with the aid and assistance of the media — attempting to create a false premise. They literally have nothing that they’re trying to make people believe is real. We’ll have to wait and see toward the end of the day, tonight, tomorrow, what the media can do with this that’s happened here today — and I’m gonna withhold predictions on that.

They don’t even have the equivalent. They don’t even have the equivalent of, “Nixon ordered me to break into the Democrat National Committee headquarters and then he ordered Rose Mary Woods to destroy the tapes proving he did it.” They don’t have a semen-stained dress. They don’t have anything. Now, the media’s gonna try to manufacture something out of this, and they’re all desperately hoping that in the remaining hours of this thing today that some bombshell happens.

But right now… (interruption) Well, that’s another thing. That’s another thing. The Democrat presidential… “What’s Biden think about this?” Biden’s probably… If he knows that it’s happening, he’s probably thankful that they’ve run cover for him on his kid. But Fauxcahontas and Mayor Pete have got to be, I think, a little distressed. There’s nothing to take from these hearings today to the campaign trail that I can see. But, again, the day’s not over, and the media manipulators have yet to begin to try to manufacture something out of this. We have to withhold judgment until we see how they try to manufacture this.

RUSH: By the way, folks, one thing: Bill Taylor’s testimony about Sondland and what Sondland told him and all this back and forth. Jim Jordan was talking about five conversations, six people, a bunch of hearsay? That conversation was not even about the phone call.

All of this hearsay was about something entirely unrelated. It was about what Taylor said that he heard five weeks later in September. It wasn’t even about the phone call. This thing is so all over the ballpark. They are desperately searching for anything — and I’m gonna tell you: No chyrons on CNN is not good. People walked through airports are not seeing blockbuster headlines on CNN about this.