RUSH: Okay, folks, I finally figured out why the staff in there does not think I’m on the right thing today. It’s not that I’m wrong about anything I’m saying. It’s they can’t believe that I haven’t brought up Colin Kaepernick. So they’re staring blanks at me in there. Every time I make what is an unassailably brilliant point, I get blank stares.

So I finally went in there during the break, said, “What?” 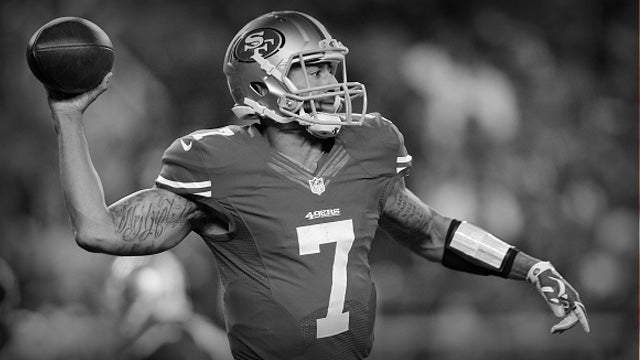 Because as far as some people are concerned Kaepernick’s a traitor who should not ever be allowed to play back in the NFL. He got the kneeling and disrespect for the flag started, claiming that it was just anti-racist cop actions that he was taking when in fact this is the guy that got the Stand Up for Betsy Ross movement started by telling Nike not to sell anything with the Betsy Ross flag.

By the way, speaking of that, folks, if you haven’t had a chance, head to RushLimbaugh.com and click on the “Store” tab. We have replenished the store with all kinds of brand-new items, apparel and other things and a whole new section for ladies with fall and winter gear in addition to everything else, the T-shirts and stuff for Stand Up for Betsy Ross.

Here’s what the NFL is doing. Kaepernick sued them for blackballing him. And they settled with him. And the settlement was somewhere between $1 million and $10 million. Hasn’t been announced. But that’s how much the NFL gave him in a settlement after he threatened a lawsuit based on being blackballed.

I don’t know this, but I’m speculating, I’m guessing that the reason they scheduled this pro day, this workout day is to head off what they might fear is another blackballer defamation suit. Kaepernick hasn’t played since 2016. He went out, he voided a contract from the 49ers in 2017. He walked away. He walked away from a contract. And he has not been given an offer to play since.

And there are people who think that the NFL has hired a bunch of vastly inferior quarterbacks to replace injured quarterbacks. Kaepernick’s much better than the people that have been hired. So the NFL schedules this workout day Saturday. Now, this is not the way these things usually happen. These are called pro days for college players. And after they go through the combine, the potential first, second round picks will have on their college campus what’s called a pro day where they will schedule a workout demonstrating their athletic skills.

If they’re quarterbacks, they do a lot of throwing. If they’re offensive linemen, they hit the — Whatever it is that the pro scouts look for. And all the teams that are interested in that player show up on that campus on that pro day. These are always in the spring before the NFL draft.

There’s never been anything like this. There’s never been a pro day for a pro player who hasn’t worked in three years. The NFL schedules this one apparently without talking to Kaepernick. It is in Atlanta. It’s at the Atlanta Falcons training complex in Flowery Branch. The Falcons aren’t even gonna be there. They’ve got a road game. They will leave for their road game on Saturday.

The thing about scheduling this workout on a Saturday in the season is that none of the principals from any team can attend it. Half the teams in the NFL are on the road. Some of them are on bye. Half of them are on the road and half of them playing at home. And since the Atlanta Falcons is the home team for this workout, there’s nobody that can get there. They gotta send scouts.

And I don’t mean to insult the people that will go, but the general managers, the decision-makers are the people who would want to attend this workout and see it. So one of the theories is that they’re just doing this to stave off what might be a second lawsuit. And it is kind of odd that Kaepernick was not consulted. He said he wasn’t. They said we’re gonna do a workout for you, pal, if you show up in Atlanta on Saturday.

So, anyway, we shall see. So, I expect now there to be much more attentiveness from the staff after having addressed their number-one issue of the day. (laughing) Here it comes. “How long can Kaepernick milk this?” He can milk this thing as long as the media will put pressure on the NFL. That’s how long he can milk it.

He can milk this as long as players in the NFL use this to create angst and controversy for the league itself. He can milk it as long as he wants to. The league is already being responsive here to pressure that’s being brought to bear. That’s why they’ve scheduled this crazy workout day.