The Stand Up for Betsy Ross Campaign Roars On

RUSH: Folks, seriously, while all of this crazy impeachment nonsense is going on, and it is nonsense. I know it’s serious. There are serious potential consequences for the president. I understand that. But it’s silly.

Because they don’t have anything. It’s an embarrassment, and it’s now trivializing the whole impeachment. Whatever the left touches, they corrupt and destroy. They ruin. And they’ve now politicized this. It’s going to become as commonly used as a campaign ad. But there are people literally trying to destroy our country here. That’s with whom we’re in the battle. They are trying to destroy our fundamental principles. 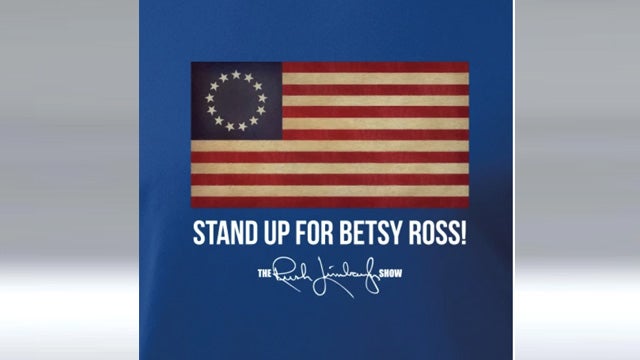 They are trying to destroy the essence of our founding, the values, the principles, the unique declaration of our human existence. Human existence, American exceptionalism are under assault. American symbols as well, like the flag. You think back to how the country began, and there’s no question the United States is a miracle. In the entire history of humanity, the United States is a miracle. From the beginning, incredible people did what had never been done before.

Now, while this nonsense in Washington continues, you think about genuine American patriots, current American heroes. Our military, police, first responders, the people who really make this country work, everyday Americans out there who are working hard, continually fighting to defend the country we love no matter what the assault is, no matter the effort to defeat or undermine. They are not seeking fame. We never hear about them, per se. We don’t call them sympathetic figures. We don’t devote days and hours of TV to them, but they are the ones who make the country work.

Despite all of these attacks on our symbols — the American flag, the national anthem, the Pledge of Allegiance — the Stand Up for Betsy Ross campaign started right here with all of you, and it roars on. It’s rarely covered in the mainstream media. We have generated, you have, $4 million for Tunnel to Towers and not an inch of ink about it. Which is no big deal. That’s not why we’re doing it. It’s a testament to the fact that this is not about anything for show. It’s not about image. It’s about genuinely helping people who have given everything to save their country or to respond to people in distress after the country is attacked.

So this whole thing starts out with a Stand Up for Betsy Ross T-shirt, a $27 item, 350,000 T-shirts are sold in a matter of two months and it generates $4 million to Tunnel to Towers, which buys new homes, retires mortgages for families of those killed in action — and it roars on.

We have stocked up the Rush Limbaugh Show Store at RushLimbaugh.com. The EIB Store is fully stocked with all kinds of new apparel for women, we even have some stuff for kids in there. It’s now way beyond T-shirts. Stuff for fall. Stuff for winter. We have hoodies. We have sweatshirts. We have fleeces. We have caps. We’ve got anything you would want.

And it’s the only place. There are over 300 knockoffs, over 300 counterfeits out there, none of them are legit. None of them send any portion of the proceeds to Tunnel to Towers. That will only happen when you shop RushLimbaugh.com and go to the “Store” tab.

RUSH: Oh, by the way, folks, I forgot to mention one quick thing. Today and this weekend, there’s free shipping at the Rush Limbaugh Show Store at RushLimbaugh.com. The simplest way to order here is either on our app or on the website. Go to RushLimbaugh.com and find the “Store” tab. Find the “Store” tab on the app or on the website and you’ll see the new apparel that we have. Not just the Stand Up for Betsy Ross campaign. There’s all kinds of new apparel as well. Gift items and things autographed by me. All different price points and price ranges — and free shipping. I forgot to mention that about 20 minutes ago. Free shipping today and this weekend.