RUSH: Trump just let the media into a cabinet meeting. Grab audio sound bite number 33. This is the president characterizing what he has seen so far today…

THE PRESIDENT: You have a kangaroo court headed by Little Shifty Schiff, where we don’t have lawyers, we don’t have witnesses, we don’t have anything. And yet I just got to watch, and the Republicans are absolutely killing it. They are doing so well, because it’s a scam. It’s a big scam. They’re doing something that the founders never thought possible and the founders didn’t want. 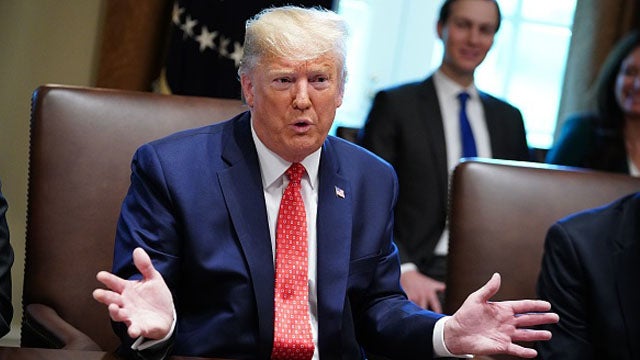 RUSH: What he means by that is turning impeachment into an ongoing political process that literally never ends — I mean, just challenging every election that you lose on the basis that the winner deserves to be impeached. And this is what’s been going on now for three years and counting. And, folks, it’s gonna go on and on. If Trump wins reelection, a variation of this is going to continue. Jonathan Turley, sound bite number 32. He was on CBS Special Coverage.

By the way, I’m told that the networks bumped out of this this morning at some point. Is that right? Do we know that for sure? (interruption) Well, I need more than that. (interruption) All right. Well, I am told that the networks bumped out of this early. They went wall-to-wall with it last week. Here’s the news. Thirteen million viewers the first day last week, whatever it was, Wednesday. Thirteen million. That’s spread out across all the networks, and it’s a paltry number.

The Comey testimony was 20 million. The way to look at it is that 95% of the American people did not watch. Then on Friday when it was Marie Yovanovitch, who was supposed to elicit the great emotional reaction, the audience fell to 12 million. Today, the networks began wall-to-wall coverage, and I’m told that a number of the networks, CBS, bumped out of it before too long because they died with it last week, and there was nothing compelling.

There was no hard, cold fact. There was no allegation. There was no offense, impeachable offense alleged — and it’s dull, it’s boring. I’ve heard people say (sniveling), “That’s so unfortunate, Mr. Limbaugh, because this is a serious, serious issue for our country and our citizens to watch this whether it’s boring or not because this is Civics 101.” It’s not the way the world works anymore.

Try telling the producer of a TV show that people ought to watch it when it’s boring, and that’s what the Democrats are doing. They’re producing a TV show here. You know what’s flat-out amazing? Adam Schiff’s constituency is Hollywood. That’s his district. You would think he’d get some pizzazz showbiz help here. But this guy is so colorless that he’s unable to breathe any life into this, and he’s hampered by the fact that he doesn’t have any witnesses to anything.

Neither of these people have ever met Trump. Vindman’s never met Trump. At least never talked to him. Here’s Jonathan Turley on CBS today. And this is the reaction to Ratcliffe claiming that all of a sudden now the Democrats have shifted gears and now Trump’s being impeached for bribery.

TURLEY: It is a very sketchy basis. I have to tell you, I do not believe they’ve made out a case for bribery either under the modern definition or how the framers understood it. 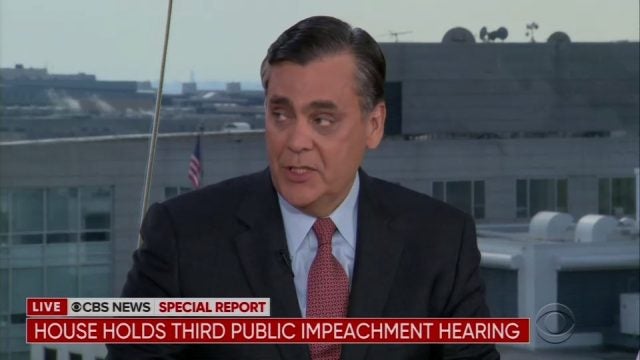 TURLEY: The Supreme Court has handed down a number of rulings dealing with the abuse of public office. They go against that broad definition. The courts have been narrowing that definition. They don’t allow these to go forward on the concept that anything you do that might benefit you personally is going to be considered a bribe because all politicians to some extent are self-dealers. They all use their office to advance their interests. If the Democrats are honestly going to try to take the Ukrainian controversy and pound that square peg into a round hole of bribery, I don’t think it’s gonna work. If they try to make this a bribery case without something far stronger, I think it’s gonna collapse.

RUSH: Yeah. I think it is collapsing. The truth is, in the eyes of the public, it’s collapsing. Now, it’s not collapsing in the commentariat at Fox News, and you can stop complaining. Folks, you can stop complaining to me about it, ’cause I get it. I watch it too. I know what’s happening there, and it is what it is, and it’s not gonna change. Not in the daytime. It isn’t gonna change. It’s trending the other way.

Now, one other thing. Trump, in his little blurb here to the media, went out for and after the media again. He just creamed them for their role in this, the epitome of unfairness. He said we don’t even have a free press. We have a press that’s totally corrupted. I don’t have his exact criticism, but he went right after them and said he hopes that at some point in the future for the sake of the country, the press can get its mission back, because what they’re doing now is just damaging as it can be to the country.

Now, to back that up, I’m sure that many of you in this audience have heard the name John Solomon. We have quoted from Solomon’s work oftentimes. He appears regularly with Sean Hannity on the Fox News Channel at 9 p.m. He and Sara Carter both are a couple of journalists which have dug up — they have dug up — the absolute truth of this. They are reporting things the media knows that they won’t report. Well, guess what has happened?

The Hill has announced that it is going to “review” all of Solomon’s columns. Now, where is the outrage? We have a member of Congress pressuring the news media into eliminating one columnist. Out of everybody that works there, they’ve got one columnist that writes something different, and TheHill.com has said (paraphrased), “Yes, ma’am! You bet, ma’am! Whatever you want, ma’am.”

And they’re gonna now start investigating Solomon, and they’re gonna start analyzing Solomon’s work. It’s even being reported in Politico, “The Hill Vows to Review Solomon’s Ukraine Pieces — The columnist’s attacks on a U.S. ambassador, which were hailed by Trump, have come under congressional scrutiny.”

RUSH: And here’s F. Chuck Todd. Gotta hear this, audio sound bite number 34, this afternoon on NBC’s special coverage of the impeachment inquiry. Lester Holt, the anchor of the NBC Nightly News said to F. Chuck Todd, “How do the Democrats break through with what’s becoming more and more complicated in terms of just the players?”

So now as far as Lester hold’s concerned, this is a miasma, he can’t figure this out. It’s not hard to figure out, Lester, just listen to me. I’ll tell you exactly what’s going on here. But to Lester it’s complicated. And if it’s complicated to Lester, it’s complicated to the American people. Here’s F. Chuck Todd’s answer to how the Democrats break through all of this confusion.

HOLT: How do the Democrats break through with what’s becoming more and more complicated in terms of just the players?

TODD: If the outcome they’re looking for is basically to disqualify the president from seeking another term, ’cause that — if that’s what an impeachment — if it is, they need to be more explicit, that he’s been trying to cheat on 2020, that that’s what this is about, he can’t be trusted to do this, we don’t know how many other countries he’s done it.

RUSH: Listen. He’s making it up. If this is an attempt to disqualify Trump, they need to be mother explicit about what he’s trying to cheat. Sorry, F. Chuck, there’s not a single witness that’s had a fact. Not a single witness has alleged an impeachable offense. They’re just a bunch of policy wonks ticked off that Trump didn’t use them.