Barr Unloads on the Democrats

RUSH: Akron, Ohio. John, great to have you on the EIB Network. Hello. 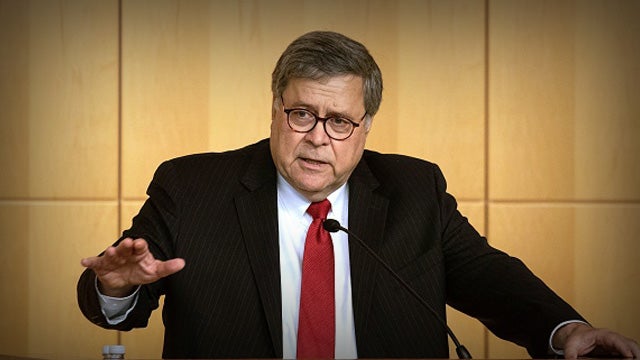 CALLER: Dittos, Rush. I think that the Democrats are absolutely petrified that Trump is gonna win another four years and prosecute Obama, Hillary Clinton, John Brennan, James Clapper, and a litany of others in the deep state department.

RUSH: Well, that ought to happen before the election.

CALLER: I would hope so, but I doubt it’s gonna happen.

RUSH: Well, I don’t know. Folks, at that famous Federalist Society meeting last week where Kavanaugh was honored, Barr spoke, and let me check this. I think I’ve got it. I’ve got so much here, I don’t know where it is. I think I’ve got as a holdover some of what Barr said at this meeting. I mean, he came out firing 14 different barrels of ammo at the Democrats and what they’re doing.

Yeah, we have it. Number 20. Grab sound bite number 20. I’m gonna squeeze it in real quick. Barr is running the investigation. They’ve impaneled a grand jury, which means there are gonna be indictments because it means there’s a criminal investigation. Here is Barr at The Federalist Society convention — a bunch of lawyers — in Washington on Friday.

BARR: Immediately after President Trump won election, opponents inaugurated what they called “the resistance.” And they rallied around an explicit strategy of using every tool and maneuver to sabotage the functioning of the executive branch and his administration. Now, resistance is the language used to describe insurgency against rule imposed by an occupying military power. It obviously connotes that the government is not legitimate. This is a very dangerous and indeed incendiary notion to import into the politics of a democratic republic.

BARR: What it means is that instead of viewing themselves as the loyal opposition — as opposing parties have done in this country for over 200 years — they essentially see themselves as engaged in a war to cripple by any means necessary a duly elected government.

We’re in a race to get this done. It may take longer than the 2020 election. I don’t know.