Pencil Neck Thinks He Has His Watergate

RUSH: Now, after the morning testimony, the statement from Ambassador Sondland and the questioning by the Democrats, Adam Schiff decided that we needed a break before getting to the Republican questioning by Devin Nunes. But Pencil Neck didn’t think anybody needed a break. He used the break to go out and conduct a press conference to say, “We did it! We’ve nailed Trump! We’ve got him,” and here is how that sounded… 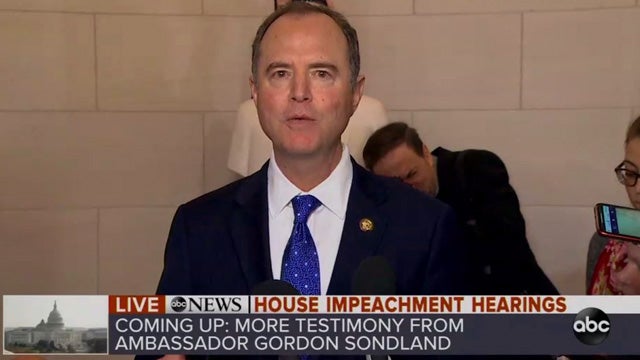 SCHIFF: I think today’s testimony, uh, is among the most significant evidence to date. And what we have just heard from Ambassador Sondland is that the knowledge of this scheme, this conditioning, uh, of the White House meeting, of the security assistance to get the deliverable the president wanted — these two political investigations that he believed would help his reelection campaign — was a basic quid pro quo. It was the conditioning of official acts for something of great value to the president, these political investigations. It goes right to the heart of the issue of bribery as well as other potential high crimes or misdemeanors.

RUSH: There you have it. They’re saying it’s bribery. So Trump is now guilty of bribery. We’ve got the evidence. Sondland provided it. That’s gonna be in one of his articles of impeachment. And Ken Starr, by the way, just so you know, on Fox has said that we’re now getting close to where Republican senators will make the trek to the White House to tell Trump to resign. We’re getting very, very close to that, said Ken Starr today. So everybody’s got Watergate on the brain. Everybody’s looking at this as repetition, replay of Watergate.

RUSH: Now, here’s Ken Starr. I want to… I quoted Ken Starr, and Fox is apparently scrambling to say that Starr has been misquoted. Starr did not say, apparently, that Republicans in the Senate are getting ready to walk to the White House to tell Trump to resign. I thought I heard Starr say it. I was watching Fox when Starr came on.

Starr said (paraphrased), “Oh, this is it. This is the end of it. This is it. They’ve got their article of impeachment now. This is over.” Here’s what he said. This was this morning before… No, it wasn’t. This was before the start of the hearing, okay. I heard Starr during the break, I believe, but let’s listen to anyway. Sound bite number 33 coming up, three, two, one.

STARR: The real issue is the senators are watching. Are senators going to now say, “In light of what we hear today…” It’s gonna be a long day even with the ambassador alone. “In light of what we have heard, we need to make a trip down to the White House,” that historic example set during the Nixon presidency. From what I’ve been able to glean, I don’t think that’s going to happen, but obviously what happens today could — has the potential to — be a game-changer.

RUSH: Right. Because Sondland was gonna come out and drop the bomb that Trump had demanded a quid pro quo. Now, Jennifer Griffin of the Fox News Channel has tweeted, “Clarification: Starr was quoting Schiff in the first part of what he said but added that he would assume new articles of impeachment would now be drawn up describing today’s testimony as ‘bombshell’ and ‘game-changer.'”