Vindman Will Be Rewarded for His Loyalty to the Coup

RUSH: Snerdley just asked me a good question. He said, “Do these guys not know what’s gonna happen to them?” I said, “Who are you talking about?” “Well, look at Vindman. Does Vindman not know that his days are over? This guy has just violated various aspects of the Uniform Code of Military Justice. He’s guilty of rank insubordination. And Sondland! Do these guys not know that they’re finished after turning?” No. It’s the exact opposite. In fact, I got a note from a good friend in the military, retired, who offered the same opinion about Vindman yesterday.

He said, “This guy has violated so much of the Uniform Code of Military Justice: Insubordination, not following the chain of command, implementing his own policy, claiming…” This guy actually claimed that he was the architect of foreign policy in Ukraine, Vindman did. Vindman actually said that he wrote the talking points for Trump for the phone call. Really? I wrote my military man back. I said, “I think you are reading this wrong,” and he wrote me back, “What do you mean?”

I said, “Vindman’s a hero! Vindman has been following somebody’s orders. He’s gonna get rewarded for it.” I said, “Look, the left has corrupted practically every institution in this country, and they’ve got a foothold in the military now, and it’s not news that they have. We’ve got our political left-wing climate change generals. We’ve got our warrior generals. Vindman’s following somebody’s orders, and he’s gonna be rewarded for it.

No, Vindman’s gonna be protected. He’s gonna be rewarded. Same thing for Sondland. Do you know what happens to Republicans that turn on Republicans? They’re celebrated, they’re taken care of — until they stop being useful. What do you think’s gonna happen to these guys? I mean, I’m seriously interested. You asked me the question, “Do these guys not know what they’re in for?” What do you think’s gonna happen to ’em? (interruption) Why would Vindman’s military career be over? (interruption) Oh, because he can’t be trusted?

He can certainly be trusted by somebody. He can certainly be trusted by somebody to follow his orders and do what he’s done. This guy has demonstrated profound loyalty to somebody or to some thing. Vindman is not rogue. This is what everybody needs to understand. He’s not a one off. He hasn’t decided on his own to save America from this weasel Trump. He is following somebody’s orders. So is the whistleblower, and so is Sondland. We’re in the middle of a coup here, gang!

Somebody is pulling the strings for this. You look at these hearings. The Republicans are not allowed to call any witnesses. There was a closed-door session on Saturday that the transcript has not been released. Let me see what this is. Devin Nunes just pointed out that the person who can testify about the real reason that aid was held up is a guy named Mark Sandy. He was deposed behind closed doors Saturday.

But they have not released the transcript of his deposition because it hurts Sondland and it’s allowing the Democrats to impute the worst about all of this. They actually had a witness testify Saturday — Mark Sandy — who can testify to the ultimate truth of the reason aid was temporarily withheld. They’ve got his testimony; they won’t release it. The Democrats are not allowing the Republicans to call any witnesses, either rebuttal witnesses or fact-based, proactive witnesses. All they can do is cross-examine Democrat witnesses.

That’s all they’re being permitted to do — and only a few Republicans are being allowed to actually do it. If the American people (we are told) are so, so concerned about fairness, well, there isn’t any in any of this. We had a woman call at the bottom of this hour who was eloquent as anybody has been on the absolute one-sidedness of this. But my point to all of you is that these people are not rogue. Vindman is not off the reservation. He’s on somebody’s, and he’s following orders. Vindman is an order taker.

Now, it is obvious that he is very impressed with himself at the same time. To sit there under oath yesterday can be claim that he coordinated American foreign policy with Ukraine? That had to be news to everybody watching, including the people that really do it! We all know a guy like this. We’ve all had a guy like this in our offices, in our classrooms, in college, in high school, whatever. But my point is that this guy is taking somebody’s orders, like the whistleblower was taking somebody’s orders and still is, and I believe Sondland is too.

Sondland’s been so much all over the ballpark. His original testimony had to be amended after he heard other testimony. This is the third version of Sondland’s version of events that we’re getting today. So that’s the thing. I mean, the real troubling thing is that all of these people who — in the normal ebb and flow — would be found untrustworthy and un-hirable and so forth? They’re gonna be rewarded if they’re not already being rewarded, because they are loyal to somebody. They are loyalty to some thing, some organization. 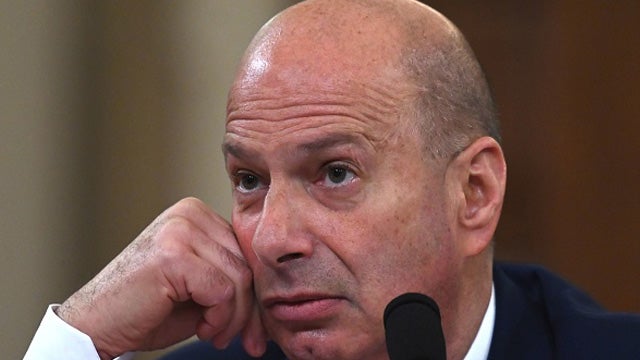 They are following their orders.

They are doing their duty.

All of these people believe that the president is not the commander-in-chief and he’s not at the top of their chain of command.

RUSH: If nothing’s happened to Comey or Hillary, why do you think something’s gonna happen to Vindman or Sondland?