RUSH: Now, don’t misunderstand me when I say that none of this matters because they’ve already drawn up the articles of impeachment. There are probably three or four articles of impeachment. They’re written. They’re waiting to unveil them. When I say it doesn’t matter, it means there’s nothing that can happen here. It means nothing will stop Pelosi and Schiff moving forward with this. And, believe me, there’s nothing going to happen that suggests they should move forward. 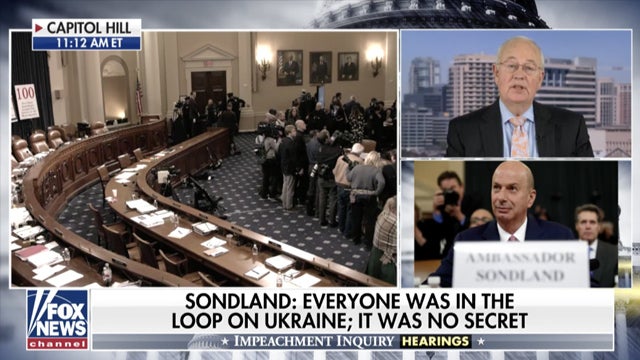 They have bombed out at every stage of the event. Have you noticed something, folks? People say, “Rush, why don’t you go on TV?” I don’t like television, folks, for a whole host of reasons. Let me give you another reason why right now. Let’s go to yesterday morning, for example. It’s been this way every day of these hearings. The way the time frame worked out, the Democrats start, Schiff does his opening, introduces whoever the witnesses are. They do their openings and then we go to Democrat questions.

It’s not just Ken Starr. I’m not hyping on him. I mean, every one of them. It doesn’t matter what network you go to. It doesn’t matter what network you watch. They comment on what they see at the moment, and they do it breathtakingly and with great drama as though, “Oh, my God. Another nail in the coffin of Trump.” And at the end of the day it’s the exact opposite. Yesterday was a disaster for the Democrats. They’re walking all over Sondland today.

Democrat witnesses today are making fun of Sondland talking about what a worthless hack he was. So it’s just… (sigh) I don’t know. I say I don’t like TV. I mean, it’s what TV is. It’s the conformity. It is the requirement that everybody on there have some opinion about something. You can’t say, “Well, we don’t know enough yet.” Who’s gonna watch somebody say that? “We don’t know enough yet.” I even heard somebody say, “We need a foreign accent! We need something to liven this up.”

We got one today. We got Fiona Hill. We got a British accent today, and I’ve been studying it. You know, I’m a student of voices. I’m a half-decent impressionist. So I’ll break that out at some point.