Sondland Trashed After Failing to Deliver the Goods

RUSH: Now poor old Sondland. As we noted yesterday, Gordon Sondland and his wife — she is a hotelier, real estate mogul in Portland — have been the subject of threats. Their businesses have been boycotted and picketed since his involvement in all of this became known. Representative Mike Conaway, Republican of Texas, pointed out that one of the people leading the protests against Sondland and his wife is a Democrat representative from Oregon named Earl Blumenauer. 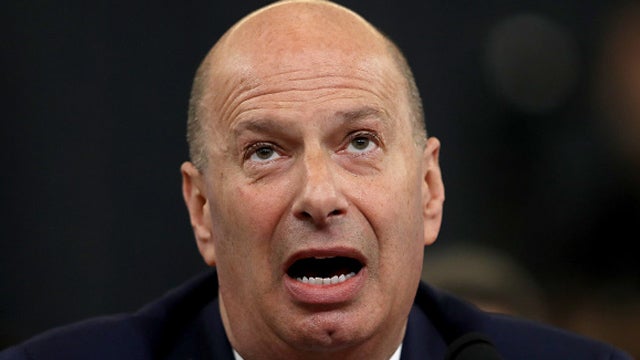 This Democrat representative called for a boycott of Sondland’s hotels in October. Can anybody say witness intimidation? Breitbart has the story: “Left Protests at Gordon Sondland Hotels, Bullies Family Members with Threats.” A Democrat member of Congress is leading this effort. Okay now to the audio sound bites, number 4. This is Mike Turner. This is yesterday. Mike Turner, representative Republican of Ohio, asked how he knew that aid to Ukraine was tied to Ukraine conducting investigations.

TURNER: So you really have no testimony today that ties President Trump to a scheme to withhold aid from Ukraine in exchange for these investigations?

SONDLAND: Other than my own presumption.

TURNER: Which is nothing.

RUSH: There we go again, my presumption, my assumption, my opinion, what I overheard, what he said, what she said. That’s it. This whole thing… Yesterday, folks, I cannot emphasize (in case you’ve forgotten), Sondland had taken down Donald Trump at 10:30 yesterday morning when they broke for whatever, for Schiff’s press conference. Everybody analyzing it all over cable news — no exceptions — it was over for Trump. Sondland said!

The Drudge headlines were three and four deep: Bombshells! Trump demanded quid pro quo.” Ken Starr: “It’s getting close to the time senators go to the White House to tell the president to resign.” And the afternoon session came, and we learned that Sondland actually said the president told him he didn’t want anything from Ukraine. “No quid pro quo. No nothing. I don’t want anything. Just tell Zelensky to do the right thing.” That blew things sky high. That actually happened before noon. That blew things sky-high.

But by afternoon and evening…

GREG WALTERS: (background noise) There’s a problem with Gordon Sondland, which is that he’s kind of a ridiculous person.

LISA DESJARDINS: Democrats have a problem in that Gordon Sondland is remaining to testify that the president himself insisted, “No quid pro quo.”

ELIE HONIG: It’s complicated for Democrats because the Democrats’ argument now has to be believe him but not everything.

DOUG SCHOEN: You certainly can’t base an impeachment on anything he said because he talks out of all sides of his mouth.

CHUCK TODD: Here’s the downside for Democrats. He doesn’t have a lot of receipts.

GLORIA BORGER: He’s got a problem with his reputation.

ANNE MILGRAM: He is not a perfect witness at all.

DAVID AXELROD: He isn’t going to be the witness of the year. I mean, he is not a very credible guy in many ways.

FREDO CUOMO: This testimony today does not go with the first. He’s got a credibility problem.

SUSAN HENNESSEY: All of a sudden, the Democratic counsel was actually going out of his way to try and rehabilitate Sondland’s credibility.

RUSH: Oh, my goodness, how far they fall in just a period of hours. In truth, folks, Sondland was not that much all over the ballpark. It was the analyses that were. It was the interpretation of what Sondland was saying, prematurely that was all over the place and creating all of these crazy ideas that it was over for Trump. Sondland didn’t say that, the analysts were saying it, after only one side — the Democrats — had had their go at him, had had a chance to ask questions. But by the end of the day, Sondland was thrown overboard.