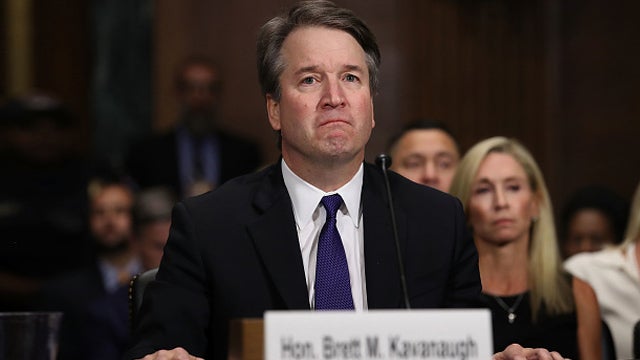 Trump’s saying he wants a trial. Many people are surprised. Why would Trump want a trial? Because a trial’s in the Senate. Guess who runs Senate? The Republicans. Guess who gets to call witnesses? The Republicans. Guess what that means? Hello whistleblower, hello Hunter Biden. That’s why Schiff and the boys went to the bar last night, started consuming adult beverages and patting themselves on the back because to them they have achieved the black mark. It can be reported that Trump has been impeached.

They’ve got four articles of impeachment. They’re gonna present them and so that’s it, Trump has been impeached, they did their job. They can run around, they can campaign for reelection, they can raise money. “We did it, lunatic base! We did it, extremist wackos, we impeached him.” Whether they get a conviction — Schiff has done his job as far as he’s concerned, as far as all these people are concerned.

Getting the black mark on Trump’s resume was the immediate objective. They know damn well that there’s not gonna be a conviction. In fact, I just told the broadcast engineer the sound bites I want to use, but I’m gonna change up. I’m gonna find it. I gotta go to the bottom or the back of the list here. Be patient while I catch my breath. It’s 16 and 17. Will Hurd from Texas.

Now, Will Hurd is reputed to be a moderate Republican, not a pro-Trumper necessarily, willing, he said, to be open-minded about all of this and willing to be honest, and if he heard enough that would justify a vote for impeachment to go to trial in the Senate, then he would be right in there casting his vote that way. It was Will Hurd who exposed Lieutenant Colonel Vindman, “O say can you see” as maybe exaggerating a bit when Lieutenant Colonel Vindman said that he had advised the new Ukrainian president to be very careful of the Russians and to not get involved in American domestic politics. 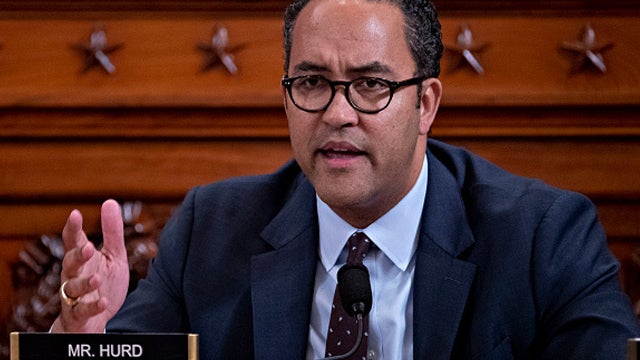 And Will Hurd said (paraphrasing), “So you had a one-on-one?”

“Well, no. I was in a bilateral group. There were a lot of people. It wasn’t one-on-one.”

“So did anybody overhear you giving this advice?”

Well, then maybe, maybe Lieutenant Colonel Vindman didn’t actually have this kind of power. So Will Hurd rendered an opinion during the House Intelligence Committee impeachment hearing, this is what he had to say.

HURD: So where does this leave us? An impeachable offense should be compelling, overwhelmingly clear and unambiguous, and it’s not something to be rushed or taken lightly. I’ve not heard evidence proving the president committed bribery or extortion.

RUSH: Of course there wasn’t any bribery or extortion. For crying out loud, especially bribery as intended by the Founding Fathers. Do you know, folks, my buddy Andy McCarthy had a good column on this. The existing bribery statutes in American statutory law are only 165 years old, and yet the Founding Fathers put bribery in the clause on impeachment in high crimes and misdemeanors.

So if the modern definition of bribery did not even become law for 50 plus years after the country was founded, then what the hell was it? Well, I’ll tell you what it was. You know what the founders were afraid of? I’ll tell you specifically what they were afraid of. We had just declared independence from Great Britain. We had fought the Revolutionary War. We made it official.

The founders were afraid that high government officials, including a president, might end up being pressured or blackmailed or some other form of intimidation used to engage in traitorous behavior and betray the new union, the new country. That’s what they were afraid of. You can get rid of a president who sells out the country in that era to Great Britain or to any other competing world power. That’s the specific. That’s what their reference to bribery meant. Not the current statutory definition of bribery that Schiff is using.

It didn’t even exist as American law at the time the Constitution and this particular clause were written. The founders were specifically concerned of a president turning traitor against the country and turning it back over to the U.K, well, Great Britain. There was no U.K. at the time. But that’s what they were concerned with, that’s what the high crime and misdemeanor was. That was something that would have warranted expelling a president from office. Not this piddly little stuff Schiff is trying to make up. And that’s what Will Hurd is saying here. He hasn’t seen any evidence the president committed bribery or extortion.

He’s a well-known moderate, and a lot of Democrats were thinking that if they were gonna turn a Republican, it would be Will Hurd. So Will Hurd announces yesterday, sorry, no mass, no mass, you guys haven’t shown me anything. We now go to David “Rodham” Gergen, CNN Anderson Cooper 14 last night on CNN.

GERGEN: I did think that Hurd on the Republican side, I thought when Hurd was talking, when he first started, “My God, he’s gonna break,” you know? And then he swerved right at the last minute. 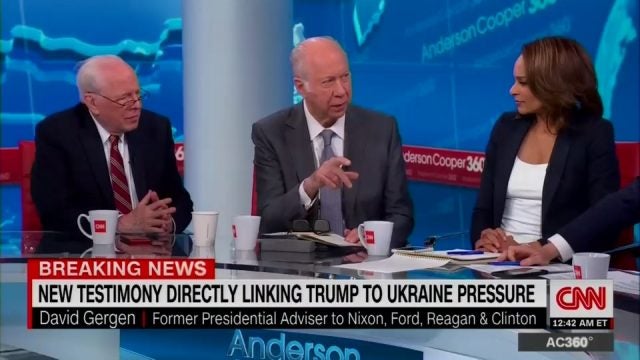 RUSH: I want to explain a little bit more about this whole bribery and treachery and treason stuff. Because what the Democrats have done here, not a single witness ever talked about bribery. Bribery was never part of their plan until they focus grouped it and found out that the American people had no idea what quid pro quo meant. It didn’t light any fires. People know what it is, but what was it? There wasn’t any quid pro quo. People had no idea.

So the Democrats found out that bribery got a rise out of people where quid pro quo didn’t. So Pelosi goes out and changes the terms and says yes, the president is guilty of bribery. Meanwhile, not one witness ever accused Trump of it, not one witness ever said anything like it went on. Bribery has nothing to do with what it intended to mean in the founding documents of the country, the Constitution, and particularly the impeachment clause.

Now, here is why it was a concerning thing to the founders. Does the name Benedict Arnold ring a bell? Well, you say it does to you, but don’t forget a bunch of 18- and 24-year-olds have no idea who Mao Tse-tung is or Joseph Stalin. Benedict Arnold is one of the most famous traitors in American history and the founders remembered how Benedict Arnold almost lost the Revolutionary War for them just a few years earlier.

You know why? The British promised Benedict Arnold $20,000 in that period’s money for the capture of West Point. It was a major American stronghold in the Revolutionary War, and the British offered Benedict Arnold 20,000 pounds and he took it. Now, 20,000 pounds is three and a half million dollars in today’s money. So that’s how much he was offered. And eventually Benedict Arnold was received by King George as a hero. He was given a lavish pension. And that’s even after he failed.

Benedict Arnold failed. The young nation won its independence, despite the traitor. So it’s after that that the founders put together — well, around that time, they’re writing the founding documents. The Declaration has been written, the Constitution. This is the kind of thing that they were worried about, bribery, treachery, high crimes — they were thinking treason. There needed to be a way to get rid of elected officials before the next election if such horrendous things happened like Benedict Arnold. Ergo the impeachment clause. It had nothing to do with the quid pro quos of foreign policy which every president has engaged in.