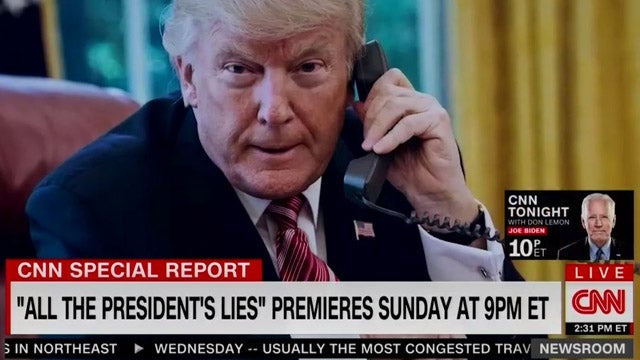 Anyway, back to the phones. Mark in Houston. It’s great to have you, sir. Hello.

CALLER: Thank you, Rush. I am so looking forward to next year and most specifically the Republican primary where you’re gonna have Republicans all over the country vying for Donald Trump’s endorsement and (garbled) plus million people following and waiting to see who he’s going to endorse. And they’re not just gonna get up there and say rah-rah (garbled) Trump because both of them are going to be doing that. We’re gonna have to watch for them articulate their respect for Trump and his agenda and how they will be able to fit into that mold. And I think it’s going to be get-your-popcorn (crosstalk).

RUSH: All right. Wait, wait, wait. What is it that has brought this line of thinking on? I mean, Republican primaries and Trump? Primaries for what?

CALLER: The senators that are retiring and so they’re going to be facing two Republicans that are gonna want to fill that spot. Heck, I was thinking of moving to one of these states and announce my candidacy for senator.

CALLER: Absolutely! They won’t get elected without him. They’re going to be two Republicans and let’s say, I don’t know, I think South Carolina is one.

RUSH: You know what? The reason why I’m fascinated by this, by the subject matter of your call is because I actually believe that the Republican Party doesn’t know it yet, but it is Trump’s party.

RUSH: For example, the way to look at this, Mark — let me ask you this pregunta. A Spanish lingo ’cause you live in Houston; you’d understand that. After Trump leaves off in 2024, who will the next president be? Will it be somebody from the Jeb Bush/Mitt Romney mold, or will it be somebody trying to carry on the traditions of Donald Trump?

CALLER: I’m sorry, but Mitt Romney is a has-been. The move —

RUSH: But Mitt Romney doesn’t know it. Mitt Romney thinks his future is being anti-Trump, and how many of these Republicans campaigning for the Senate do you think are gonna believe the same thing, that the way to get elected particularly if Trump’s in the middle of being impeached next year?

CALLER: Oh, no. Forget about impeachment. I’m sorry. You know, Donald Trump is not self-serving. If he wanted to be self-serving, he’d stay in the private sector. He’d make more money —

RUSH: Amen to that.

RUSH: Amen to that. He didn’t need to do any of this.

CALLER: (laughing) Right? He didn’t need to! He’s self-serving in the private sector. So we all need to get (garbled) that the 60-plus million that voted for him are now saying, you know what? I know Trump’s trying to do the best thing for this country, and he’s not trying to scam and steal and rob and thieve. We got that. So from here on out, I’m just gonna trust my instincts as well, and I’m gonna go with anybody who’s gonna help you get through his goals (garbled) going to see.

RUSH: I understand. You think the Republicans have the same common sense that you have, that they can see the great things that Trump’s done for the country — and by the way, by the way. Somewhere in the Stack here there’s actually a story on this. Oh, it’s the American Spectator. There’s a great column in the American Spectator about this very, very thing, all of the magical, wonderful things Trump has done during his presidency.

Let me find this baby. Yes. Yes. Here it is by David Catron. Mark, thanks for the call. I’m gonna use your call here as the transition — a little inside-baseball lingo — into this piece. I’m not gonna have time to read the whole thing to you here, but what Trump has done economically, policy-wise is exactly what he was elected to do, and the people that voted for him are not disappointed. They are not unhappy. They are ticked off, they are seething with rage and anger — and there are more of them now than even those who voted for him.

We’ve seen the polling numbers in states that Trump won narrowly. Like Wisconsin, his approval is up and support for impeachment is down. I got a note from a friend of mine last night when this big news broke about the FBI, the warrant being tampered with, the FISA warrant. This guy says, “Rush, this is it.” Oh, he had just seen the Grim Reaper on Fox, and when the Grim Reaper trots out, somebody dies, and he said, “You know, you’re right, Rush.

“When they put Geraldo on, somebody’s dead. In this case, it’s Schiff and Pelosi. They’ve got to know it’s over. This is just the beginning of this gigantic snowball that’s gonna engulf ’em all,” meaning the bombshell report last night from Horowitz on his FISA story. The polling is collapsing on Schiff and Pelosi, and his question to me was:

If the Republicans fall for that, then there’s going to be hell to pay. Anyway, there’s a school of thought out there that this is all caving on Schiff and Pelosi, and they don’t know it or that they do and are in denial, or that they know it and are looking for a way out. I don’t think so. I think they’re gonna impeach. I think they’ve got four articles of impeachment. I think they want to go to trial in the Senate. I think the fact they went celebrating last night with adult beverages is an indication that they think mission accomplished already. They got the black mark, they’ve got impeachment, that’s good enough for them.

But back to this guy’s question. His question, his call could be summarized into one simple question: Whose party is the Republican Party now? Is it Donald Trump’s party or somebody else’s? Has Trump transformed the Republican Party? And the simple answer is, yeah, and Republicans that don’t recognize that are in for deep doo-doo. 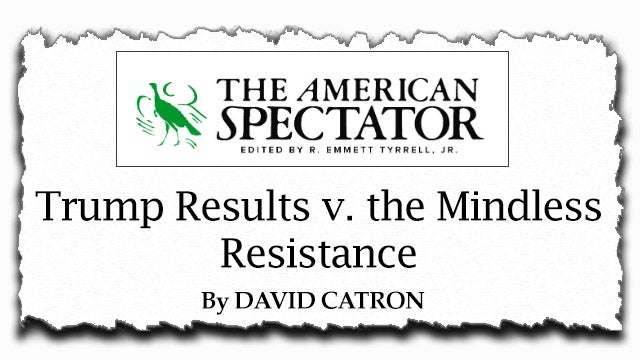 Now to the American Spectator piece: “Trump Results v. the Mindless Resistance – Do we want peace and prosperity or nihilistic antics?” As I say, it’s by David Catron. It’s C-a-t-r-o-n, so I’m guessing at the pronunciation. The opening paragraph of this piece is good. The last paragraph is good, and everything in between is good. Here’s the opposing paragraph. You ready? Here we go. Three, two, one.

“Americans are enjoying an all-too-unusual combination of peace and prosperity. The probability that you will be killed or lose a loved one in a foreign war has dropped to nearly zero, while the chance that you or anyone you know will be involuntarily unemployed is lower than it has been in half a century. Moreover, real wages are increasing and inflation is negligible. Life isn’t problem-free, of course, but times are genuinely good. Much of the credit for this gratifying state of affairs is unquestionably owed to President Trump. Yet the Democrats assure us that he is a clear and present danger to the republic.

“President Trump’s most conspicuous successes have involved the domestic economy, particularly the job market. Since his inauguration, more than six million jobs have been created, including nearly 500,000 manufacturing jobs. The latest Bureau of Labor Statistics (BLS) report shows unemployment at only 3.6 percent, including the lowest Black unemployment rate in history. Hispanic unemployment also remains near its lowest rate ever. Democrats like Joe Biden insist that the middle class has been left out of the Trump economy.”

But this is fiction. “The latest data from the Census Bureau monthly surveys tell a different story. Real median household income — the amount earned by those in the very middle — hit $65,084 (in 2019 dollars) for the 12 months ending in July. That’s the highest level ever.”

We have the highest level ever median household income. “It is a gain of $4,144, or 6.8%, since Mr. Trump took office.” Census Bureau numbers. “By comparison, during 7½ years under President Obama — starting from the end of the recession in June 2009 through January 2017 — the median household income rose by only about $1,000.”

Now here’s the last paragraph. “All of the above, and much more, was accomplished even as President Trump was subjected to the absurd Mueller investigation and the even more asinine “impeachment inquiry.” Imagine what the president might have accomplished if the Democrats had accepted the will of the voters. And, make no mistake, that’s what “the resistance” is about.” The will of the voters.

“Speaker Pelosi and the Democrats have refused to acquiesce in the peaceful and orderly transfer of power to the president chosen by the electorate. They have nothing to offer but impeachment. That makes them far more dangerous than Donald Trump.”

A-freaking-men to that. It’s exactly. You know it as well as I do, the refusal to accept the result, the constant effort to reverse the election results. And it needs to be added here that the Democrats don’t care a whit. In fact, the Democrats are distressed at this economic news, and that’s why their news media is ignoring it, suppressing it, and not talking about it.