Kaepernick’s Phone Isn’t Ringing, But Ours Is at Stand Up for Betsy Ross 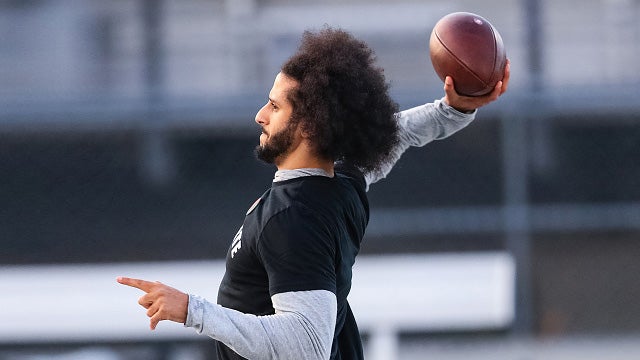 Kaepernick in his dreams is Lamar Jackson. Kaepernick is the guy who kneeled in protest during a national anthem when he was playing for the National Football League, the San Francisco 49ers because all the hubbub with Nike recalling their Betsy Ross flag edition sneaker. Instead of focusing on the fact that he was one of few athletes in the world lucky enough to play on one of the biggest stages in the United States, the National Football League, he chose to use the platform of protest ostensibly police brutality against minorities.

But that was blown to smithereens when it was shown that he was protesting the flag, I mean, Betsy Ross flag on some Nike tennis shoes and Kaepernick says Nike shouldn’t sell ’em, that’s not police brutality. He’s protesting America. He didn’t give a whit about all the military people that sacrificed their lives in defense of the country, standing near him on the field during the playing of the anthem.

It was all about him. It was outrageous. The NFL is indicating they know it by not one team offering him a gig. There are plenty of places to protest or to fight for whatever change you believe in. But doing it while soaking up all the benefit — basically commandeering a stage you had nothing to do with building, the National Football League, and it’s not like you were an indentured servant. He was making millions of dollars a year, things that others can only dream of.

RUSH: Now, back to the Kaepernick thing here for just a second, I think it’s fascinating — I don’t want to go through the machinations of the workout. It was scheduled by the league on a Saturday in November when the season’s long past the point where teams are gonna be stocking up. And there might be some crazy motivations of the league doing it.

The point is they had a workout and Kaepernick boycotted it. He set up his own an hour away ’cause he didn’t like some of the restrictions the league put on it. The bottom line is a lot of people think that Kaepernick doesn’t want to play. He likes being the martyr here. He loves the press that he gets out of this.

And it’s a dual-edged sword for us because if he hadn’t done what he did, by telling Nike to not sell the Betsy Ross tennis shoes, then the Stand Up for Betsy Ross campaign would not have started. We saw that, and we immediately started selling Stand Up for Betsy Ross T-shirts. And they sold out the wazoo, $4 million was generated in eight weeks on a $27 item, $4 million for the Tunnel to Towers Foundation, which pays mortgages and helps expenses for the families of those killed in action and first responders.

And it is still roaring. And it’s going so great that we’ve expanded now way beyond T-shirts. There’s a brand-new product line, including for ladies. We’ve got fall and winter edition stuff now with the Stand Up for Betsy Ross logo all over it. And the purchase goes, the proceeds go to the Tunnel to Towers Foundation.

So free shipping, free Rush Limbaugh Tervis tumbler for orders over $50, including the 2019 hand-forged Golden EIB Microphone ornament that we announced last week and all the Betsy Ross gear. By the way, this tumbler is not a chintzy throw-in here, folks. It is my favorite cup. I drink from it here each and every busy broadcast day and at home because it does keep coffee or whatever you put in there hotter much longer and cold drinks colder much longer. RushLimbaugh.com. Find the “Store” tab. Shop for your Christmas gifts, $50 or more spend this week, automatically throw in free shipping and a free tumbler while supplies last.