RUSH: This is Kathleen, San Antonio. Great to have you on the EIB Network. Hello.

CALLER: Hi, Rush. Thank you, and happy Thanksgiving. I just want to say something that is off the subject of the impeachment. I would like to extend an enormous kudo to our commander-in-chief for the way he handled the Navy SEAL, Commander Gallagher circumstances. I think that’s why we have a commander-in-chief. That’s what his job is, is to support our military, and I’m totally, totally on his side with this one. I think he did a great job. He stood by a decision, he made it, and that’s the way it should be. 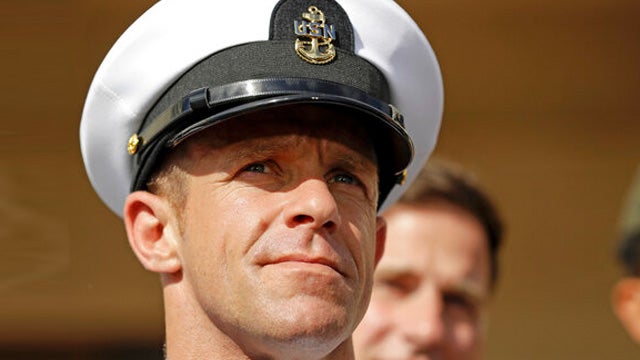 RUSH: Why are you supportive of Trump here? What did he do that you appreciate?

CALLER: Well, first of all, as the commander-in-chief, you know, his job is — one of his many jobs is — to support us, the military. And the reason that we have a military is to support and defend the Constitution and the borders of the United States.

CALLER: Oh, absolutely. But I think that the process took place. The process was put in place, the charges were filed, the charges were listened to — who all was involved, what charges were not found guilty of. And did they find something? Which, of course, you know they did. And now he has felt that the situation does not warrant the punishment to which they’re wanting to make this guy the scapegoat for probably a lot of other circumstances just like that.

RUSH: Well, that’s it. The guy was pigeonholed as guilty of a murder of a terrorist that he didn’t commit. They tried to railroad him and get him convicted for something he didn’t do. The actual murderer came forward and admitted it. The JAG officers who try to get the conviction on Gallagher gave themselves medals, despite their failed effort. So the president came and restored his rank, essentially pardoned him.

He’s gonna retire on Saturday or something over this weekend, Gallagher is. But what he did was side with the warrior as opposed to the establishment suits. It’s perfectly consistent with the way Trump is running his presidency in all areas. I’ll tell you something else he did. There was a ceremony at the White House yesterday where the dog that led them to the lair of the ISIS leader was given a medal. The dog. You may not believe this.

There is a bunch of people that are steadfastly opposed to that. “It was just a dog! What are you doing awarding a dog a medal?” There are literally people that had a cow over it. “It’s just an animal. It’s a trained animal. What are you giving it a medal for? It doesn’t even know it’s getting a medal.” Why did he did it? Well, because the dog had trainers. The dog had human beings for whom it was loyal, and the dog did its duty, followed orders.

But, more importantly, it’s Trump’s instinctive connection with people. The dog is not some incidental animal to people once they learn the story. It makes common sense to give the dog a medal and his handler — and then these deep state and these establishment types pop up about how inappropriate it is.

And all it does is further cement Trump’s bond that he has with the people who make this country work. That service dog was crucial to the mission, and Trump knows how people are with their animals anyway. He was having a picture taken of the dog and having the dog awarded… The fact that it irritated people is what’s really fascinating to me. Why would this irritate people? And the primary reason it did is because Trump was doing it.