RUSH: Reading a story at the U.K. Guardian, this is a really tough critique of Monday Night Football and ESPN and its coverage. I mean, this guy that wrote — his name is Oliver Connolly, and he just savages ESPN for ruining one of the greatest sports broadcast franchises in history. And it’s a critique of the announcers and how horrible they are. And then he gets into the graphics. 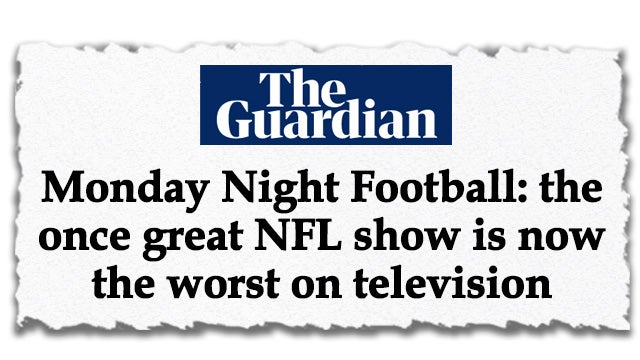 But I want to read you his review. U.K. Guardian, it’s a left-wing publication. U.K. And I want to read to you a portion of his analysis of the color commentator Booger McFarland. Booger used to play for the Tampa Bay Buccaneers. Defensive lineman. I’ve listened to Booger, he still thinks he’s playing. (imitating Booger) “That right there is not good for our league,” when somebody commits a bad — Booger, you’re not in the league anymore, you’re at ESPN. But he still feels he’s part of the fraternity, which I understand. Here is the segment of the review. Listen to this.

By the way, the point of this is not to rip Booger. Stick with me through the whole thing. I’m not joining in on ripping Booger. Booger’s not a professional broadcaster. That’s the problem with sports broadcasting, they don’t have professional broadcasters. They go out and get a bunch of jocks that played the game, try to rely on their experience. There’s only one Tony Romo a generation. There’s only one John Madden a generation. That’s a whole other subject.

“Up stepped McFarland, who had spent much of the season patrolling the sidelines in the now-infamous ‘Booger Mobile’, one of the most bizarre and pointless inventions in the history of television. McFarland was a decent in-studio college football analyst, but he has been awful as a national NFL voice. He sounds like he’s started a sentence and has no idea where it’s going to end. On Monday, McFarland officially entered the Biden Zone.” This is what I wanted to share with you.

“McFarland officially entered the Biden Zone. At this point, you don’t really care what he says, you’re just hoping he can stumble his way to a coherent conclusion.” And then the reviewer takes out after the lead announcer, Joe Tessitore. The Biden Zone. Oh, my goodness, what an insult. So, it just is an indication that everybody recognizes the limitations and the faux pas that involve Biden.