RUSH: Frank Siller, Tunnel to Towers Foundation, was on Fox this morning wearing some brand-new Stand Up for Betsy Ross gear that’s available at RushLimbaugh.com at the “Store” tab. 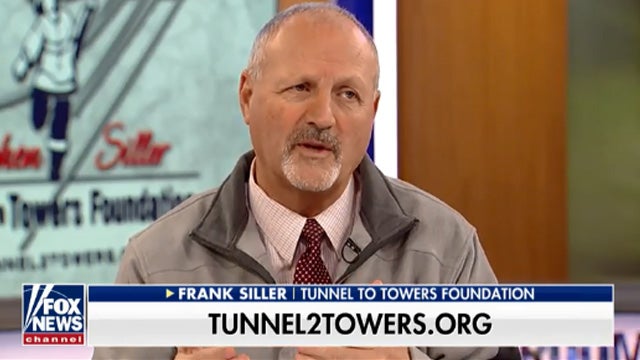 It was a great appearance. They’ve been able to retire three more mortgages because of all of you people. It’s amazing what you continue to do. And, you know, it’s remarkable. It really is remarkable what you in this audience have done. There hasn’t been any coverage of this outside of Fox. There’s not one newspaper that has reported on this phenomenal charitable achievement.

Four million raised since July 8th for Tunnel to Towers, which provides mortgage payments and new houses for the families of military personnel killed in action, as well as first responders who are killed in dealing with those events such as at 9/11. And what you’ve done with minimal coverage and zero recognition, if anyone else’s audience had done what you all have done, it would be in every paper everywhere. It would be all over the Drive-By news every day.

But it isn’t. And yet you have still championed this and made this the huge success that it is, and it is ongoing.

RUSH: I want you to hear Frank Siller. He is the Tunnel to Towers Foundation CEO. He named the foundation after his brother, Stephen — first responder, fireman, New York City — who died in 9/11. It’s really a touching story. And he appeared this morning on America’s Newsroom with Bill Hemmer and Sandra Smith, and this was a part of the segment… 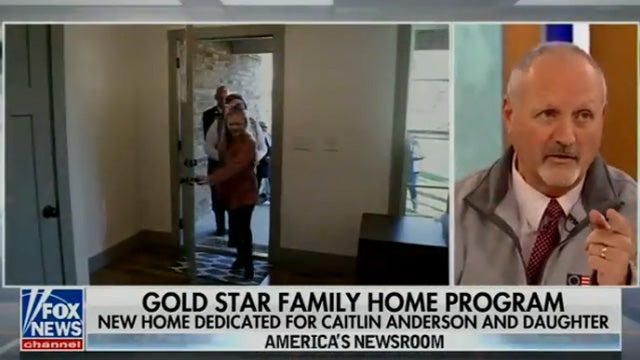 SILLER: We have three houses we’re giving away for Thanksgiving. So you said Billy Anderson, Private First Class Billy Anderson down in Tennessee; Sergeant Aaron Blasjo in Florida; and Sergeant Terrence Hinton, in Florida also. All three Gold Star husbands that the husband’s died, you know, given their life for their country. We’re able to do it. I’m wearing a Rush Limbaugh Stand Up for Betsy Ross beautiful fleece — and Rush and Kathryn did a beautiful fundraiser for us. The listeners raised over $4 million — four million and counting — and because of it, we’re able to put these three houses on that were not gonna be done this year. And there’s a lot more that’s being done because of that money. But, you know, it’s just incredible the goodness of America. Kudos to Rush Limbaugh and Kathryn.

HEMMER: Yeah, no doubt about. Four million and counting, right?

SILLER: Four million and counting. He has a whole Christmas line.

SILLER: He’s got a whole Christmas line of all this stuff ’cause he wants to donate more.

RUSH: That’s Frank Siller, Tunnel to Towers. We do have an entire Christmas line. It started out with just a simple white T-shirt. It expanded to a blue T-shirt. Then we expanded it to a ladies T-shirt. Now it’s an entire line, folks — and the original reason for doing it survives. Stand Up for Betsy Ross after Nike canceled a Betsy Ross tennis shoe line because Colin Kaepernick didn’t like the flag. So Nike cancels it, and people reach their frustration limits and wanted to push back, and have been. 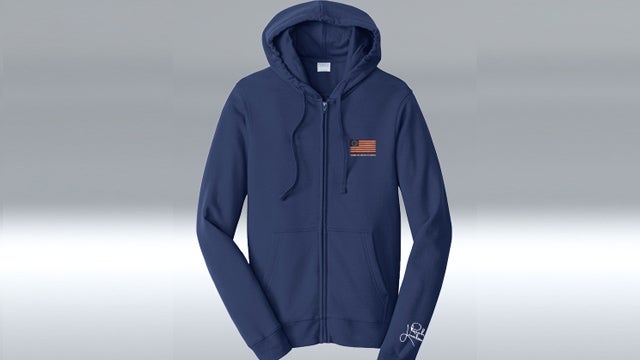 The original T-shirt was $27. We announced from the get-go… In fact, we heard about that on 4th July. That’s when this all with Nike and Kaepernick happened. July 8th we had the T-shirt in the store, 27 bucks. It didn’t take long and we’re over 300,000 T-shirts — and counting — and $4 million raised for Tunnel to Towers. Now the apparel line has been expanded. There are fall and winter items, long-sleeve fleeces and sweatshirts and hoodies. There is a complete ladies’ line now, including sizes and colors.

There are, of course, other items in the RushLimbaugh.com Store, not just Stand Up for Betsy Ross. The Stand Up for Betsy Ross items, proceeds do go to the Tunnel to Towers Foundation, but there’s all kinds of stuff. And we’ve got a special running this week: All orders $50 and over get free shipping and a free Tervis tumbler, and we update the Tervis tumblers. These are Rush Limbaugh Tervis tumblers, and we update them now and then, and I’ve got one here in the formerly nicotine-stained fingers of my left hand.

And I use it exclusively here and at home. I drink coffee out of it. It keeps coffee hotter, longer; keeps iced beverages colder, longer — and, in the summertime, these things don’t sweat. That’s what I like about it. It doesn’t drip all over you when you pick it up to take a sip. So go to RushLimbaugh.com on the Web or on our app and just find the store. Click on the “Store” tab, and everything that’s available — brand-new items, including an entire ladies’ apparel line — is right there in the store at RushLimbaugh.com.

RUSH: I want to put a picture up for those of you watching on the Dittocam. And we probably — well, now that I’m gonna say this, this is essentially an order to the website staff — we will have the video of Frank Siller on Fox today in toto that you can see at RushLimbaugh.com. But I want to put a picture of Frank from this morning on Fox on the Dittocam. 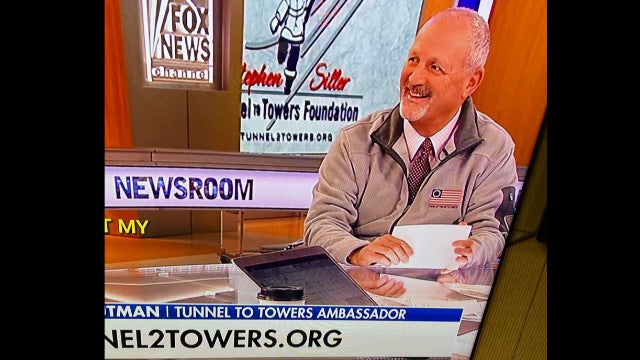 I snapped this with my brand-new iPhone 11 Pro Max right off the TV. I want you to see — Frank is a great guy. He is one of the most good-natured people that you’ll ever run into, and those kind of people stand out. You know people like that. They’re good-natured, they’re always smiling, they never seem to be grumpy. I mean, they get mad now and then, but they just seem to be good-natured people. They seem to find pleasure in most everything that is going on around them, and that’s Frank.

He’s making this Tunnel to Towers Foundation come alive after the death of his younger brother. His brother was so much younger he said sometimes he felt like his father, but it’s all being done in honor of his brother. But I wanted you to see the fleece that he described that he’s — folks, when you see this on TV, that thing looks like a $250 fleece. And it’s not. It’s one of the things that we’re really proud of. We have found the highest quality stuff at the price points that we want to make available. And we’ve logoed the Stand Up for Betsy Ross flag icon on — in this case, on the left-front chest. Sometimes it’s on the sleeve. Depends on the item.

But this is just an example of one of the items for fall and winter. If you play golf, for example, in 55, 60 degree weather when it’s windy, this is ideal for it. It’s lightweight, but it will combo break the wind and keep you warm at the same time. And there are dark blue versions. There are hoodie versions if you feel like you want to hold up a convenience store, you dream about doing that. I’m just kidding. I’m just kidding. We can’t control if the criminal element’s out there, but we’re not catering to ’em. I’m just joking.

But their work, the work that they’re doing at Tunnel to Towers, paying off mortgages for families of head of households killed in action defending the country. In some cases they actually have new homes constructed that are tech innovations that are made to order for veterans, men and women returning from battle who’ve lost limbs, who can’t bend down to open the freezer compartment on the refrigerator or a cabinet, so much of it is automated. It’s fascinating what they’re doing.

And, of course, what you’ve done is enabled it with $4 million and counting. And we’re on the verge of announcing yet another installment of donations to Tunnel to Towers made possible by you. We restocked everything one final time for the holiday season, for fall and winter. And this week anything 50 bucks or over, free shipping and, by the way, you’re not gonna buy it and not get it for a month. We get it out as fast as we can.

One of the things that I am most proud of is the fulfillment operation that we have scaled up to handle this demand. This stuff gets out fast. And free shipping the rest of this week, $50 or more per order and we’ll throw in a free Tervis tumbler. So that’s at RushLimbaugh.com website, click on the “Store” tab. It’s all right there. And the same thing if you use the app on your phone or tablet.