About That Thanksgiving Visit to Kabul

RUSH: Did you see that the Drive-Bys actually fired a reporter? I didn’t even know Newsweek was around. I guess Newsweek is a Web only thing now since magazines are in such dire straits. But there was an infobabe for Newsweek. What’s her name? Jessica Kwong, K-w-o-n-g. Jessica Kwong tweeted on Wednesday, “How is Trump Spending Thanksgiving? Tweeting, Golfing, and More.” Of course, how did Obama spend holidays? He golfed, and he golfed, and he hung around liberals on Martha’s Vineyard, and then he golfed — and with Obama golf? 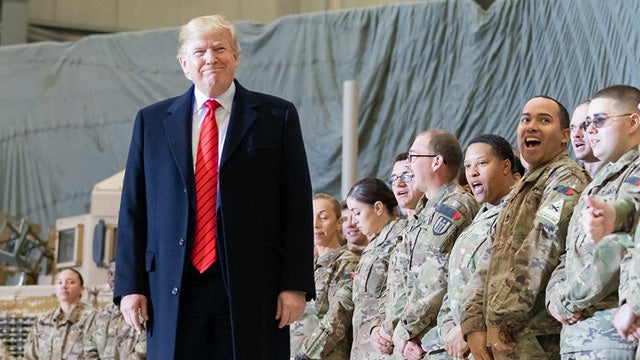 “Oh, it’s so wonderful! Obama’s taking up something new and learning to excel at it.” It was just wonderful. While she was composing and submitting this tweet, Trump was on a secret trip to visit the troops at Bagram Air Force Base near Kabul. And, by the way, it is Kah-bool. It’s not “Cobble.” It’s Kabul, K-a-b-u-l, in Afghanistan. Do you know how he did it? Do you know how he got there? You think of all the leaks that have come out of the White House, the fact that this didn’t leak…

There’s a couple other things that haven’t leaked, too, which are very curious. Trump was here. He had had the rally in Sunrise, Florida, on Tuesday night. It was called the Coming Home Rally. ‘Cause Trump’s official residence is now Palm Beach, Florida, voting and all that. So Trump wants to go visit the troops. There are two Air Force Ones. You must know that for this to make sense to you. There are two Air Force Ones, and they both fly on every trip, one’s a decoy and backup.

It’s like the New England Patriots. Did you hear about this? The Patriots had a game in Houston last night. The Patriots have two team planes. They’re Boeing 767s. They have two team planes. One is a backup in case the primary has maintenance problems. (interruption) No, no, no, no. But… (chuckles) No. No. Each is outfit with 60 seats. They’re palatial. They’re stylish. They take two planes to Houston. One plane was filled with players who had had the flu and a cold all week, and the other plane was filled with players who had not, so that the players who were sick would not infect the healthy ones.

It’s one of the only times for an NFL game people can think of where a team took two airplanes. And the Patriots own their airplanes. And they’re giant. They’re Boeing 767s. Anyway, there are two Air Forces. Trump flew one down here, and they kept the other one at Joint Base Andrews. Normally it would be here as well. Nearby, not at the same place. But it would be at Air Force Base nearby. They kept it at Joint Base Andrews in a hangar. It’s normally outside all lit up so people can see it. They kept it in a hangar.

This is Tuesday night and Wednesday night. So Trump is finished with his rally, goes to Mar-a-lago on Wednesday, and under cover of darkness sneaks out and goes to a nearby airport and takes a C-130. They drive the car… It might have been a… No, it was a C5. They drove the car. There was only one car there was no caravan, no media. Everybody was in one vehicle. They actually drove it up the ramp into the belly of the airplane, and it took off, with all the shades down, no lights on. The only thing giving it away was its engine noise. 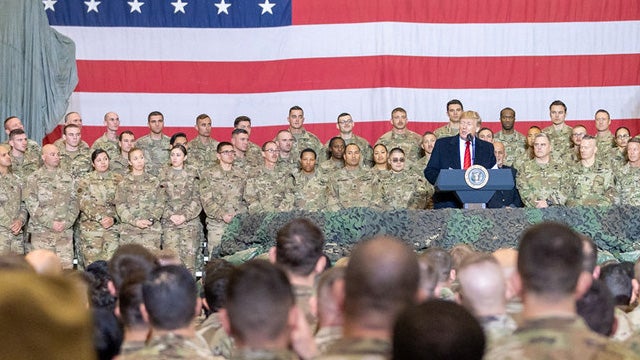 And it flew to Joint Base Andrews, where the second Air Force One was still under cover of its hanger. It was prepared for flight, and media… They did take, I think, 20 media people, and cell phones were taken away from ’em so they couldn’t tell anybody. They were not told where they were going. The White House even went so far as to send tweets from Trump’s account ostensibly from Mar-a-Lago while he’s in the air on the way to Afghanistan, to fool the media into thinking he’s here — and that’s when this babe at Newsweek sends out her tweet.

So Trump on Thursday shows up feeding the troops over in Afghanistan, and nobody knew about it. They arrived at Bagram Air Force Base — again, with all lights off. They had to the corkscrew version of the landing, which is common over there because of terrorist anti-aircraft fire. All the window shades down, no lights whatsoever until the very last minute. It’s an instrument landing. Pilots know it well. They light up their own way only when they have to.

And then by the time Trump shows up at the Air Force Base where they are doing Thanksgiving, then the word’s out. And it’s like a 16-hour flight even with the wind. When I went to Afghanistan, we stopped in Dubai. It’s as far as I could go, and then I had to take a U.N. plane ’cause you can’t fly over Iranian airspace to get there. So you have to go around Iran and up through Pakistan to get into Afghanistan.

I don’t know what route they took, and then Trump gets back Friday morning about 8 a.m. and had a full day at Mar-a-Lago with other things thrown in. But the point is, they fired the Newsweek babe! I can’t… I can’t believe this. I mean, there are countless other reasons to fire reporters. This one’s kind of minor. Trump and his son, Donald Trump Jr., weighed in on the story. “Fake news is gonna fake,” Trump Jr. said.

The president added, “I thought Newsweek was out of business.” I did, too, until I saw this. But it’s amazing that there is accountability here. I think Newsweek had to be looking for an excuse to cut expenses, ’cause I can’t believe they would actually embarrass a reporter by firing her. Do you realize the precedent it sets, to fire a reporter for being wrong about Trump? That puts every damn one of them on the chopping block.