RUSH: Now, my friends’ 60th wedding anniversary — big, big bash on Saturday night — Gay and Stanley Gaines. You’ve heard me talk about them. Snerdley knows them. Gay Gaines is a prolific, never-sleeps conservative organizer, activist, fundraiser. She just has more energy… I’ll tell you, her energy rivals Donald Trump’s. Stanley is a self-made man from West Virginia. They’re some of my closest friends. I met them in 19… I forget.

She was running GOPAC for Newt Gingrich at the time, and I think it was 1990 or ’91, somewhere in there, and I met them at a party in Washington at the French embassy. I had not yet moved to Palm Beach. So, yeah. It was four, five years before that at the French embassy. Stanley was thinking of buying the Tampa Bay Buccaneers from Hugh Culverhouse, but he was really afraid the price wasn’t high enough, that if he paid what the asking price was, his friends in Palm Beach would be embarrassed that he couldn’t have paid more. (laughing)

Gay was telling the French embassy people that they had the place settings wrong, that the fish fork was on the wrong side of the plate, and… (laughing) I tell you what, their three children made remarks. Let me tell you something about this now. This is something I noticed, and I know their children are 40 and 50, so forth now. But, you know, all parents… Well, let me put it this way. Most kids want the approval of their parents.

They seek it. They long for it. But most kids don’t want to be their parents. I mean, they admire them — and they certainly want their approval and they want their attaboys and their acceptance and all that. But their three kids love them so much, they wanted to be just like them. I can’t think of a better way of explaining the quality people they are. 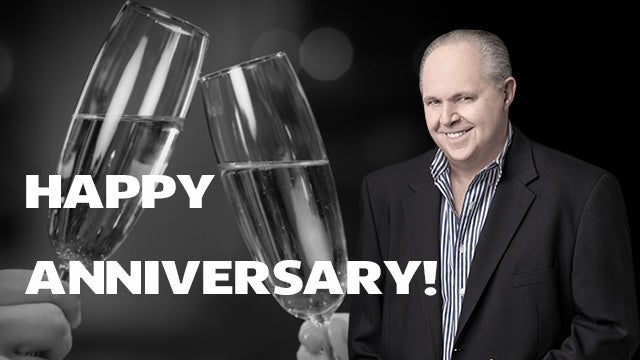 Their kids wanted to grow up and be just like them, and that would be a great thing if that happened — and they are. They’re on their way. It was a thrilling, nice party. I was out cutting a mean figure on the dance floor, Snerdley, doing my John Travolta moves out there. (interruption) Oh, yeah. Yeah, it was just a cool evening. But 60! Sixty years! Congratulations to both of them. It was a great honor to be part of it.