RUSH:  No big surprise.  Kamala Harris has backed out or is dropping out of the 2020 presidential race.  She was never in it.  She was never in it.  The media hyped her a little bit because of all the boxes she checks off. She’s a woman, female.  Supposedly African-American, but really isn’t.  She hates Trump.  No nonsense, smart, had an affair Willie Brown. She checked all the boxes.  It just never worked out. 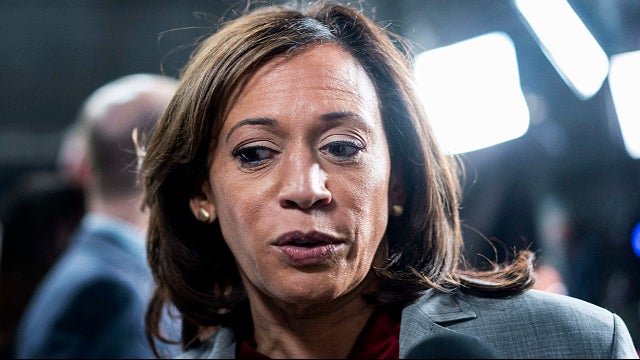 Oh, yeah, he was talking about how young people — African-Americans — go nuts watching his leg hair turn blond in the sun and in the swimming pool.

He says they liked to go down there and hug his legs and so forth, that they’re fascinated by it.  I mean, how’s Kamala Harris supposed to compete with that?  This guy’s the frontrunner!  You know the next one that’s gonna drop outta here — maybe not next, but it’s imminent — is Fauxcahontas.  She’s gone.  After one week, Mini Mike has already bought 6% support in the Democrat primaries.  One week!  Mayor Pete creeping up in there.  Biden’s son’s lawyers left him in the middle of some paternity suit trial.  It’s bad news out there.

RUSH: CNN just reported Kamala Harris — I don’t have time for the sound bite – is dropping out of the presidential race and the announcer, Jeff Zeleny, who used to be at New York Times, said that the Democrat race is now older and whiter since Kamala Harris has dropped out. Aw. So sad. Did the Russians have anything to do with this, with what happened to Kamala Harris, you think?

RUSH:  This is a headline from the New York Post today: “Michael Bloomberg Surges Past Kamala Harris in Democrat Primary Poll.”  I guess so.  She’s pulled out.  No.  She has dropped out, and Mini Mike (that’s how Trump refers to him, Mini Mike) has shown up at 6% in the Democrat primary after one week.  So you could basically say that he’s bought himself to 6% support.  The New York Post — which is obviously biased. You know, Bloomberg’s a New Yorker and there’s a little bias there.

“Former Mayor Michael Bloomberg is already having an impact in the Democratic primary for the White House just a week after launching his presidential bid… The survey found that Bloomberg’s support increased from 3% to 6%,” oh, so he bought 3% support, a total of 6%, “among likely Democratic voters and Democratic-leaning independents.” This is in the Hill-HarrisX Poll.

Of course, she’s had some bad days. Employees quitting and resigning.  One Kamala Harris employee said, “I have never seen staff treated so poorly.” She’s apparently… They say the same thing about Klobuchar, that Klobuchar is impossible to work for.  Kobuchar has acknowledged this. She says, “Well, okay.  Go ahead and blame me.  I demand excellence.”  Yeah? So here we have two women on the Democrat side who have people who work for them talking how Cruella De Vil-like they are, just plain old mean.

RUSH:  Well, there you have it.  The Russians continue savaging the Democrat electoral process.  Another potential presidency driven out by Russian agent Tulsi Gabbard: Kamala Harris is gone, done in by the Russians.