Turley Turns the Hearing Around in the Afternoon

RUSH: I think something has happened here that the Democrats did not expect — and this is constant, this is common. It is amazing how the formula… Well, it’s not the formula. It’s amazing how this has played out. Let me say what I mean. During the Schiff hearings, in the morning we got all those witnesses and all their devastating assessments. It was all hearsay, but it was pure, unobstructed hatred for Donald Trump — and the only questions were asked by Democrats.

That was the entire morning. By the time this program started, people were saying, “Oh, my God, Rush, this looks so bad! (mewling) Why can’t we ever catch a break? It’s so bad.” The afternoon session would come, and the Republicans would blow them out of the water, and everybody would feel better. It happened every day of the Schiff hearings. So today we got the first day of the Round Mound of the Gavel and his hearings, and it’s the same thing. 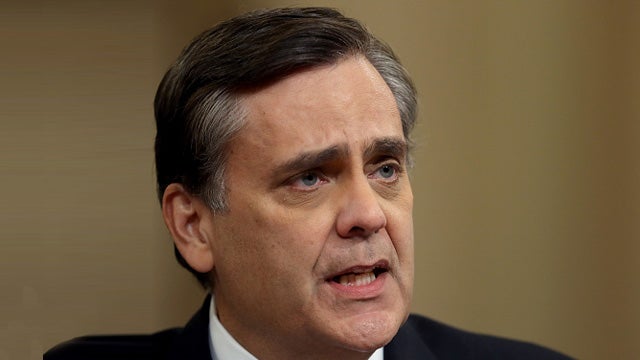 We’ve got these three hacks, these three legal scholar law professors and a scripted question-and-answer session with a CNN and partisan left-wing hack lawyer asking the questions, and, man, oh, man, these law professors are just dumping on Trump. “Why, he’s the scourge of the earth. He is the worst example of humanity there’s ever been. This guy should be impeached for calling the news ‘fake news.’ This guy should be impeached because he had a picture of Mar-a-Lago on his State Department website one day by accident. This guy’s horrible!”

This Feldman and all these people, it was infuriating. It was pure, adulterated hate. And we get the afternoon. All morning long the Democrat lawyer didn’t ask Jonathan Turley any questions. Jonathan Turley is not a pro-Trumpist, but he does not approve of this investigation, this impeachment, because he thinks it’s catch all. He says, “You people don’t have anything. You’re running around here on generalities and your political preferences are dominating everything, and this is a dangerous precedent.”

What has happened, folks, is after the morning session — a couple hours of intense and partisan anti-Trump hatred — the Republicans got to include Turley. One voice — Jonathan Turley’s voice — has turned this whole thing around. All it took… Now, this is my perspective here having to watch this in little two- and three-minute snatches as you know. But do not doubt my perceptibility talents, and I’m telling you that Turley…

The equivalent would be letting half the air out of the balloon and stopped it from floating. And now it’s just hovering up there and nobody knows whether it’s gonna crash back down or keep lifting. And I really do think that just a single voice of sane reason in opposition to this madcap, hate-filled partisanship has ended up shifting the balance just like it did during the Schiff hearings. Let me show you what I mean, ’cause I have three sound bites from Turley.

And these… Let’s see. I’ve got… Well, these are all opening statement. This is not even from questions he was asked. But it was the questions he was asked afterwards. When we get those bites, what I’m saying here is gonna have even more weight. But let’s go to with these three ’cause will illustrate what I’m talking about. Jonathan Turley is a law professor at George Washington University, and this is what he said about the “impeachment charges,” quote-unquote, against the Trumpster.

TURLEY: I really don’t have a dog in this fight. But you can’t accuse a president of bribery; then when some of us note that the Supreme Court has rejected your type of boundless interpretation, say, “Well, it’s just impeachment. We really don’t have to prove the elements.” That’s a favored mantra that it’s sort of close enough for jazz. Well, this isn’t improvisational jazz. Close enough is not good enough. If you’re gonna accuse a president of bribery, you need to make it stick, because you’re trying to remove a duly elected president of the United States.

RUSH: Damn straight! He’s noting, “Where’s the bribery? You guys talked about bribery for two weeks under Schiff and we can’t find it today. You’re moving the target all over the place.” He said, “You’re just trying to get close,” and they are. All they’re trying to do is get close enough. They want a black mark on the Trump resume. They know they’re gonna get an acquittal over in the Senate. This is part of the 2020 campaign.

I’ve gone through the past two days what they know they face if they lose 2020. They face a 7-2 Supreme Court, conservative Supreme Court. Roe v. Wade threatened. The borders closed. Guns? Nothing done about it the way they want. They’re in abject panic mode here. I do think their attitude, their psychology is screwed up enough, they can think they’re winning during all this because they always do. They think they’re winning because the polls are on their side, except some of them on impeachment aren’t.

They think they’re winning because the press reports their angle every day. But Turley is calling them out here. “You know, you left-wing…” He’s not calling them names like I am, but he’s saying, “You left-wing partisan hacks up here, you can’t just come out and start talking about bribery and then offer no evidence for it. And then you can’t just say that and then forget it and move on to some of these other nefarious things. We are talking about removing a duly elected president, and just ’cause you don’t like him, it’s not enough!”

Now, it’s interesting: After his opening statement, Turley have not asked any questions. Very few. In fact, he was asked, “Mr. Turley, did you write these words in the Wall Street Journal?” and the stupid lawyer read the words. “Yeah, but that’s not the context.” “That’s a yes or no. I don’t care about your context! Yes or no, did you write those words?” “Yes.” So there’s lawyers are enforcing their stupid, “I’m not interested in your context. This is a ‘yes’ or ‘no’ question.” Just like, you know, lawyers do to scared-to-death citizens on the stand in your common, everyday trial in circuit court.

Now here is Turley continuing on that theme…

TURLEY: My testimony lays out the criminal allegations in the previous impeachments. Those were not just proven crimes. They were accepted crimes. That is, even the Democrats on that Judiciary Committee agreed that Bill Clinton had committed perjury. That’s on the record, and a federal judge later said it was perjury. In the case of Nixon, the crimes were established. No one seriously disagreed with those crimes. 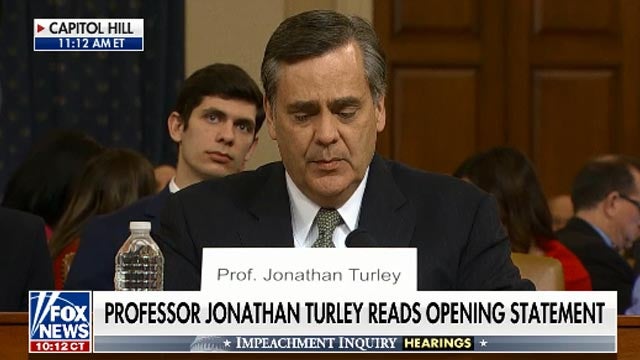 TURLEY: You have such a short investigation it’s a perfect storm. You set an incredibly short period, demand a huge amount of information and when the president goes to court, you then impeach him. Now, does that track with what you’ve heard about impeachment? Does that track with the rule of law that we’ve talked about? If you impeach a president, if you make a high crime and misdemeanor out of going to the courts, it is an abuse of power. It’s your abuse of power. You are doing precisely what you’re criticizing the president for doing.

RUSH: Bingo in everything. It is Biden who demanded a prosecutor get fired in exchange for aid to Ukraine, which was never forthcoming, by the way. I don’t need to go through that again. Yeah, the president goes to court to stop you from getting his tax records, to stop you from getting his secret conversations with lawyers and you say he’s abusing his power? You are by seeking them in the first place and by trying to hurry this thing up.

So it’s no wonder why Turley was not asked any questions by the round mound of the gavel’s lawyer. But the Republicans did ask him questions and we’ll have some of those. I’m just telling you, here you had these three obviously partisan hacks dressed up and disguised as legal scholars and law school professors who are experts in policy and it just took one voice, it just took one voice to properly characterize the extremeness of the Democrats on this.

RUSH: The three Jonathan Turley sound bites that we played were not from his opening statement. They actually were from questioning this afternoon. What happened was that the ranking Republican on the committee, Doug Collins, asked Turley an open-ended question. “Mr. Turley, since you were not asked any questions for the most part during the morning session, I want to ask you your general thoughts on all this,” and he just let him run.

So Turley essentially got an open-ended question to expand and advise his opening remarks. And those three sound bites were an answer to the question that Collins asked, which is open ended. Basically, “Mr. Turley, what do you want to say to all this?” And so Turley got a chance to react to the partisan extremism and the hackery that had gone on all morning. And he called ’em out on it perfectly. And, see, all it takes is one voice.

Now, I say that from my perspective watching it. I don’t presume to be able to tell you how average Americans walking through airports, seeing it on CNN hear it, but anybody paying attention to it, it was unmistakable. Turley nailed ’em. Turley nailed what they’re doing. He nailed their motivations for it, and he made it clear he’s got no dog in the hunt, meaning he’s not a pro- or anti-Trumpist. He’s a constitutionalist first.

TURLEY: My testimony lays out the criminal allegations in the previous impeachments. Those were not just proven crimes. They were accepted crimes. That is, even the Democrats on that Judiciary Committee agreed that Bill Clinton had committed perjury. That’s on the record, and a federal judge later said it was perjury. In the case of Nixon, the crimes were established. No one seriously disagreed with those crimes.

RUSH: Right. So he’s reminding everybody Clinton literally committed crimes. Now, you knew that because you listen here regularly, and I’ve known that and told you. He committed perjury. He suborned perjury (for those of you in Rio Linda, that means he asked people to lie) and he lost his law license for a year. But there was a crime there — and with Watergate, there was the perception of crimes, although I’ll never forget my dad.

My dad was so livid at what happened to Nixon. My dad… Until he died 18 years later, when the subject of Nixon came up, my dad lost it. Whoever dared bring up Nixon to my dad (impression), “Tell me what he did! Name one thing! What did he do?” And nobody could name anything. People wilted and faded away into the carpet when my dad was really mad. “What did he do? Nobody can tell you what Nixon did!”

Anyway, you can tell people what Clinton did. He lied under oath. Okay.