RUSH: Let’s move on to this woman from yesterday, the Stanford professor. I’ll tell you what. A lot of people who send their kids to Stanford are regretting it today. If this is what the faculty at Stanford’s like, they are saying no wonder my kids are screwed up when they come home for the holiday. We’re talking here about none other than Pamela Karlan. 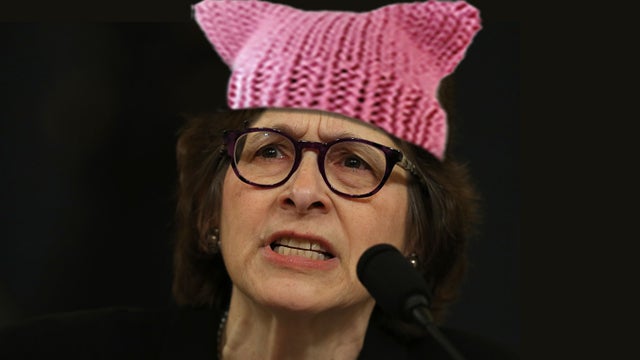 This is the woman who said liberals live close together ’cause they like each other. Conservatives, they spread out, they live apart because they don’t even like living close to each other. She was just brimming with hate. She couldn’t disguise it: Well, Donald Trump can name his son Barron, but he can’t make him a baron.

Do we want to talk about who’s “baron”? Do we want to go there? There are all kinds of ways to define that word. Then she said, “I couldn’t bear… I had to cross the street. I had to cross the street. I couldn’t dare walk on the sidewalk in front of Trump’s hotel in Washington.” This is not normal, folks. This is not normal. This Feldman guy, the Harvard lawyer? He looked like he was out of central casting for a 1940s movie starring Cary Grant.

The hairstyle, the collar, and that weird-looking tie. They’ve all been writing “Trump should be impeached articles” for over two years. They’re all donors to the Democrat Party and to Hillary Clinton. Pam Karlan was a certainty that she was gonna be nominated to the Supreme Court if Hillary was elected. So we got some sound bites from Karlan. From the hearings yesterday, here’s what she said. This is the comment about Trump and his son.

KARLAN: I’ll just give you one example that shows you the difference between him and a king, which is the Constitution says there can be no titles of nobility. So while the president can name his son Barron, he can’t make him a baron.

RUSH: Okay. Did I miss this? Has Trump named his son a baron of the United States? Well, then where does this come from? This woman is deranged. And, folks, look, I know I’m a naturally funny guy. But I’m telling you, I’m dead serious when I tell you these people are literally poisoned with their hatred. This is senseless. This connects to nothing. The only reason that this came out of her mouth is that the hatred synapses in her brain are firing and she can’t stop them.

So what in the world is she even thinking? What is the starting point for her thinking to even make this statement? And then to realize she hates a 13-year-old kid who’s not done anything but been conceived in part by Donald Trump. This is not rational, and it is not normal — and it is the result of pure, undiluted, raw rage. It has no logical beginning. There’s no reason for her to even be thinking of this, other than this morbid fear she’s got that Trump wants to become a king — and you know why they might think that?

Here’s the next one. This is Matt Gaetz calling her mean. This is audio sound bite number 15.

RUSH: Okay. She rejected that, and she was smirking. (impression) “You don’t know what you’re talking about! You’re just a little pissant member of Congress. You have no reason to say that. You have no — no right to even be in the room with me, you little gnat,” and then she decided she had to apologize, and even when she apologized, she couldn’t avoid the snark.

KARLAN: I want to apologize for what I said earlier about the president’s son. It was wrong of me to do that. I wish the president would apologize, obviously, for the things that he’s done that’s wrong. But I do regret having said that.

RUSH: One of the Democrat… Let’s see. One of the Democrats… Who is this? Well, this guy came to notice during the Clinton years defending Clinton during his impeachment, Julian Epstein. He was a big Clintonista then became an Obamaista. He was out there on CNN today. The cohostette Poppy Harlow asking Julian Epstein, Democrat strategerist, about the Democrat strategy here on impeachment. “Do they need to keep it narrow? Should they stick with Ukraine or do they broaden it and then go back to Russia?” Do they really go out and do they really try to nail Trump finally, once and for all on Russia? What do you think they ought to do?

EPSTEIN: They should keep it narrow to the Ukraine matter. The Democrats were losing the argument on the Mueller inquiry because, I think, earlier this year the Democrats really did get out in front of the facts. And when the Mueller inquiry didn’t quite show the conspiracy or the Russian collusion question as definitively as they wanted, I think that middle third of the public kind of lost faith and tuned out. Um, and then what happened with Ukraine was we had a giant reset. For political reasons and particularly because of some of the more, eh, extreme voices on the left, they may feel that they need a third article on things like emoluments —

EPSTEIN: — or the Mueller investigation, obstruction issues, to satisfy some of the — kind of more the base elements of the Democratic Party.

RUSH: He’s got it. They’re not gonna listen. “Stick with Ukraine,” and they don’t have anything on Ukraine, but stick with Ukraine. If you go back to Russia, they’ve already lost that; everybody knows there’s nothing there. If they broaden it and if they go do that, they’re just gonna lose. They’re gonna lose. I hope they do, you know? I wish there were three more law professors being grilled today. I wish the Round Mound of the Gavel had three more of those arrogant, effete snobs. If they did, Trump’s approval number would be up to 54% tomorrow.

CALLER: I am a little bit nervous, so I’ll do my best, but I think the Democrats have actually trapped themselves in impeachment. They could have jumped on board with the president’s solutions and his policies when they started seeing his success. But instead of that, they’ve been hell-bent upon destruction and the rabid hatred of Donald Trump, and now they’re out of options. They don’t have any solutions to run on in 2020.

RUSH: This is very shrewd, very shrewd. They have literally nothing. In fact, somebody in Pelosi’s press conference today did ask her about all these, “Oh, no, we’re hard on the DREAMers! God bless our DREAMers! We love our DREAMers. And we’re working hard on the (muttering), we’re working hard on (muttering).” They’re not doing anything on any of this stuff.

RUSH: They couldn’t bring themselves to try to take credit for some of Trump’s accomplishments because their whole reason for existence the last three years is that Trump is illegitimate. They’ve made that case. You’re right. If they had gone in and tried to take credit for some of this — because everything the Democrats have been promising their constituents, particularly their minority constituents… Everything they’ve been promising for 50 years is now happening with Donald Trump.

RUSH: And they’re out of ideas.

RUSH: Well, that’s a great point, and they couldn’t. They had entrapped themselves in this place. Their base would not let them get away with doing that, Laurie.

RUSH: They do — and, folks, I know that sounds simplistic and not complex enough, but it really is true. It really is one of the very many elements to the foundation of the current Democrat Party. Hated for the people that elected Trump is right there front and center. It’s unmistakable. Laurie, thank you. I appreciate it very much.