Like everybody, I’m watching this stuff, and I’m really bothered by it. It’s making me very uncomfortable, but not for the reasons that you think. This whole thing is a charade. Everything since Trump was elected was a charade. Now, don’t misunderstand. I’m not suggesting that this isn’t real. It is very real.

The Democrats are trying to get rid of Donald Trump. But the way they’re doing it is a charade. And it’s just painful to me to watch everybody react to the daily narratives the Democrats set and respond and react to that rather than to just pooh-pooh this and properly characterize what it is. 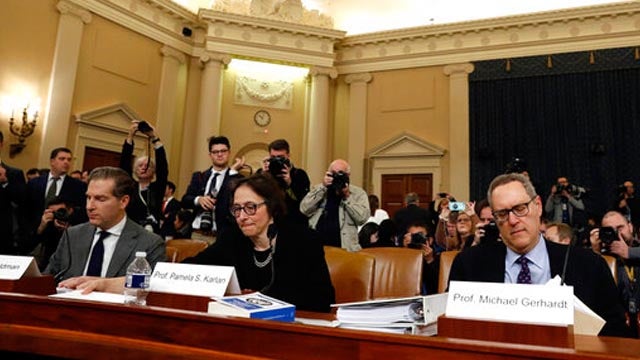 Now, I think the American people and you people in this audience are doing a far better job understanding what’s going on than learned analysts and highly paid commentators on cable TV and the internet. You can watch those three bogus witnesses yesterday and immediately be repelled by them.

They’re going outside the Constitution. These people are their own government in their own minds and they simply have their noses out of joint because they couldn’t win. They couldn’t beat this guy in 2016. So everybody, “My God. Oh, my God. Pelosi did it. She’s actually gonna go to articles –” Folks, they’ve been talking about impeachment since election night. This is nothing more than a timeline being fulfilled.

This isn’t brought about by any real events or transgressions committed by Donald Trump. This isn’t about the phone call that he made to Ukraine. This isn’t about — well, it is about Russina collusion. It’s because they failed to make that case. They’re not gonna let that go. That’s gonna be the focal point. They’re gonna go back and they’re gonna revive Mueller. They still think that was the golden bullet, that was what was gonna sink Trump. That was gonna prevent him from being inaugurated or, falling that, it was gonna get him thrown out of office long before today.

Everything to them is race and civil liberties, civil rights. They hate the white majority. They hate the white Christian majority. It is why they want to remake and rewrite this country and rid themselves of this nation’s founding. “But, Rush, but, Rush, some of them are white.” Yeah, they are white, and is they are so laden with guilt and self-loathing that they cannot understand the concept of a great united country united around ideas, united around principles, individual liberty, the citizen dominates the state. They can’t understand that. They don’t want that.

To them, Make America Great Again simply is a bunch of people who want to go back to white majority nationalism. That’s what it means. No matter how many times you tell me them that’s not what it is, no, you’re dead wrong about that. For 30 years I have explained to them face to face, in speeches, what conservatism really is, what our desires are, how we love everybody, how we want the best for everybody, how we’re colorblind. They reject it. And they reject it because they want no part of it. 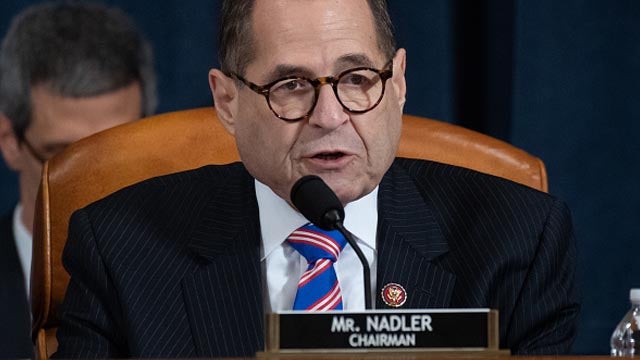 And a lot of these people, as you saw yesterday, have become professors, and this is the drivel that they teach. And this is why college campuses are so screwed up. That’s why young Americans are so confused and screwed up. They’re being taught to hate. They’re having hate ingrained and instilled and propagandized into the very fabric of their souls.

They can’t imagine and say who they really are, although the value of those hearings yesterday? Have you seen the Rasmussen Reports? Trump approval is up to 52%. The more public they go, the more public they get, the more Americans see them for who they are. I want more of this. I want ’em to go get three more professors. I want ’em to go get three more of these arrogant, effete snobs; give them all kinds of television time to tell us how much they hate us. They can’t help themselves.

This babe yesterday (I use “babe” loosely) Pamela Karlan? Okay. So she just can’t help herself. She hates Donald Trump, and it’s irrational hate. She doesn’t even know him. Why does she hate Trump, do you think? ‘Cause he got elected. She really hates you. You elected him. But she hates Trump. Trump represents, to her, Make America Great Again, strong economy, low unemployment, record-low unemployment for African-Americans and Hispanics.

My God, it’s everything they claim that they have been for. All these people, including the Never Trumpers, are getting everything they’ve claimed they’ve supported, and they’re angrier and enraged more than I’ve ever seen them. Why? Because they aren’t the ones doing it — and that’s not even getting close to it. This babe Pam Karlan said she was walking in Washington, and she got close and she could see the Trump’s hotel.

She had had to cross the street. She couldn’t even walk in front of Trump’s hotel. Give me a break. Are you really that fragile that you can’t walk on a sidewalk with the Trump hotel entrance on your right? Is this really the case? Are you really that — What? — frightened, filled with hate? It’s hatred, folks. You’re watching undiluted, intense, concentrated, raw rage. It’s who they are. It’s who they’ve always been, and they can’t contain it now.

Given the forum of the impeachment hearings… Why do you think Nadler didn’t announce these guys in advance? Because everything known about them would have been publicized before they spoke. They’re all donors to Hillary or the Democrats of one stripe or another. They’ve all written columns on impeaching Trump years ago. They are the last pretense of objectivity and fairness, and they’re not even up there as law professors. They are there as Democrat Party hacks, left-wing hacks.

These people are the people that want to have king-like powers, especially over those of us who don’t agree with them. And then even when it came time to apologize, she couldn’t apologize for it without snark. Pure, raw, unadulterated hatred. So to respond to these people, Pelosi goes out and announces they’re working on impeachment. She’s urged them to go ahead with it. So we put people up to respond to what Pelosi said today.

Fine and dandy, but that’s not what this is.

BEGALA: I think what’s gonna happen is that this will continue ad seriatim. I think they’re gonna have to continue an open impeachment —

BEGALA: If you believe, as the Democrats do, that this president’s a recidivist —

BERNSTEIN: Even in a Senate trial, it is very possible we are going to see evidence come in from the press, from Trump’s own mouth. (crosstalk)

BEGALA: But they don’t appreciate that Donald Trump’s getting —

RUSH: So the upshot of this is, what Begala… When they cite Gotti, the FBI went after Gotti for 20 years. What they’re telling you is exactly what I’ve told you. Even if Trump wins in 2020, they’re not stopping this. Now Trump is John Gotti. Now he’s a mob boss. Now he’s going to be pursued no matter what. They’re going to be impeaching Donald Trump or doing whatever it takes along those lines for the rest of Donald Trump’s presidency.

At some point, folks, the wizards of smart on our side are gonna have to figure this out and stop reacting to the daily premise that the Democrats put out, because it limits the ability to explain to the American people what’s really going on. I think the American people here have a better idea of what’s going on than even some of the Republicans who are striding to microphones and making comments. This is not to be critical of them.

They’re in the forest. They see the trees. You know, it’s human nature. People go out and say something, accuse you of something, accuse your leader of something, you think you gotta respond to it. I understand that. But half of it’s rope-a-dope. These people are simply running an operation that gets rid of Donald Trump because they hate him. Not because he’s done anything impeachable. They can’t name an impeachable offense!

Matt Gaetz yesterday asked these three brilliant professors, “Can any of you identify an impeachable offense in the Adam Schiff committee report?” Crickets. Nothing. There isn’t an impeachable offense that anybody can cite. There are no facts. These witnesses yesterday had no facts. All we got from them was their learned opinions — and their opinions are supposed to be irrefutable, because who are they?

Why, they are law professors at Harvard and Stanford and the University of North Carolina. Now Jonathan Turley. Poor guy. He’s the one guy up there who actually played this straight. And now there’s a move on to force the George Washington University law school to fire him, by students. A student has written a letter demanding that no man as filled with scourge as Turley should be allowed to teach students. Here. I have it near the top of the Stack here.

As I looked at stuff, I found stuff that I kept putting on the top, the top being the most important. Here it is. Sara Carter came across this. It’s a leaked email. “An internal email” shows a George Washington University student calling for “Turley’s resignation following his testimony… The email speaks for itself calling Turley a ‘sad excuse of a man.'” Now, I see this, and I wonder what Turley’s reaction is. Turley made it clear he’s not a Trump supporter before he said anything else. 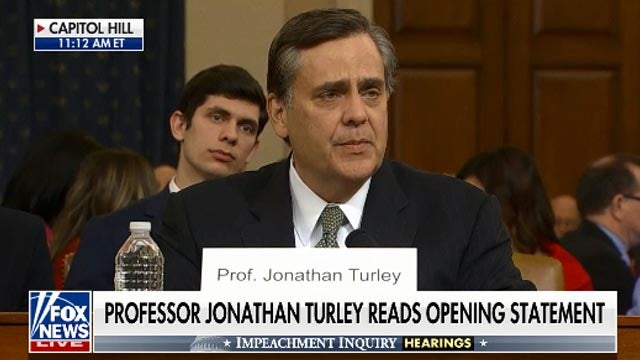 He thought he would get himself an insurance policy. “I’m not a Trump supporter. I have no dog in this fight. I’m here to represent the Constitution.” They want him canned. The email opens, “I hope this message finds you all well, ladies and gentleman. Aside from Mr. Turley, of course. I am writing you all after listening to Jonathan Turley’s disgraceful statement defending the corrupt and impeachable actions of President Trump… I know you all cringe inside knowing that you are affiliated in some way with Turley and have to work or study at the same” place with him.

“He is defending the indefensible and I hope that all of the Deans at GWU Law and the students will recognize that he is not serving in the best interest of our country and is a detriment to the success of your school’s future reputation. His actions today were spineless and shameful. He is clearly a lackey for the Trump administration. I trust you will act appropriately and reprimand this sad excuse of a man.” The Drive-By Media isn’t even covering Turley. If you watch CNN, CBS, NBC, CBS, MSNBC, read the New York Times, you don’t even know that Turley showed up yesterday, much less what he said.