Watch Me on Fox & Friends Tomorrow at 8:30AM ET

RUSH: Folks, I have been asked to remind somebody of something. I got a compliment a moment ago from a great caller, Melody out in California, about the Betsy Ross gear. Kathryn told me to tell you all that on the fleeces and on the hoodies, that the Betsy Ross flag — the whole icon — is literally embroidered. It’s not screen printed. It’s not put on there some cheap way that’s gonna fade when you start washing it. It’s literally embroidered. That’s not done at our price point, meaning the quality is top drawer, and it does matter that it’s embroidered rather than screen printed.

The T-shirts, of course, are screen printed, but the fleeces and all the fall and winter gear, the Betsy Ross icon, the flag, is literally embroidered on the material. And it’s… (interruption) Yes, I am. This is another thing. I am gonna be on Fox & Friends tomorrow at 8:30 a.m. Eastern Time because we have an announcement on the next phase of the Stand Up for Betsy Ross movement that we have going here at RushLimbaugh.com and our store. 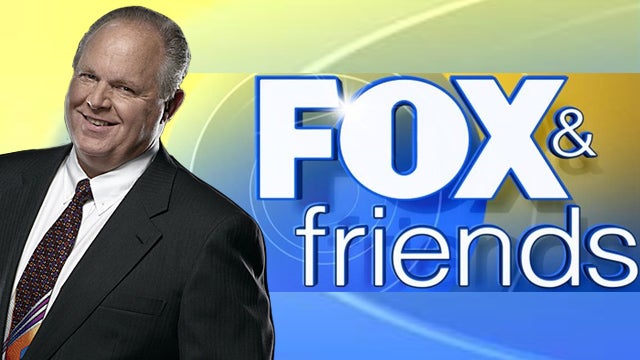 So we’re gonna have a big announcement on another donation to Tunnel to Towers. And of course, Fox & Friends people say, “Well, you gotta let us ask you some questions about the news.” “Fine and dandy. Just… Anything you want, have at it. You’ve got five minutes.” No, it will be longer than that. But they’ll probably blow out two segments ’cause I’ll get on a roll and they won’t want to stop it. It’s the way it usually happens, but certainly 8:30 a.m. Eastern Time tomorrow morning, Fox & Friends.