RUSH: What’s happened is interesting. That voter confronting Biden about his kid’s unfair, screwball deal with Ukraine has shamed other media into asking Biden about it. It happened today on Telemundo. 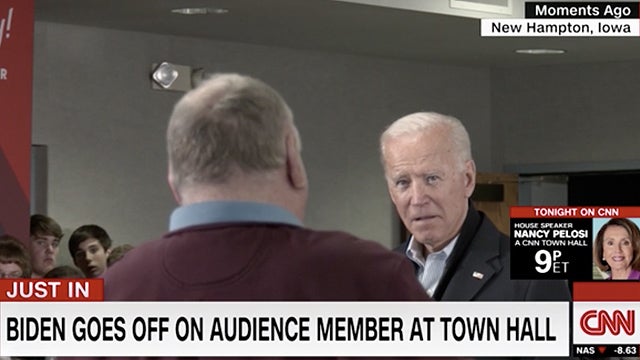 So a voter stands up and says it, and Biden wilts and crumbles. (impression) “You’re a damn liar, Man! Let’s do some push-ups! You’re fat. Let’s do some push-ups. I’ll bet your hair on your legs doesn’t turn blond like mine does, you pig,” and this guy was undaunted. So on Telemundo today the anchor is Jose Diaz-Balart interviewing Biden on the No Malarkey Tour. By the way, what is that, the No Malarkey Tour? Here is Jose Diaz-Balart asking Biden about his son, Hunter. 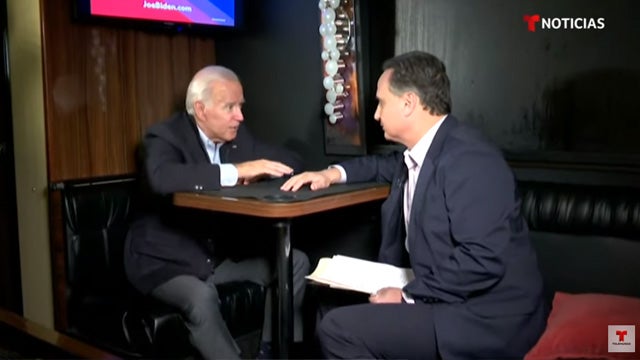 RUSH: (Snort!) “Was that wrong?” If it were a Republican, the assumption of it being wrong and illegal would have been in the question and it would have been a demand to defend it. But at least they’re asking him, because an 83-year-old voter did the job journalists used to do. Here is Plugs’ answer to that penetrating and piercing question.

BALART: Is it wrong? 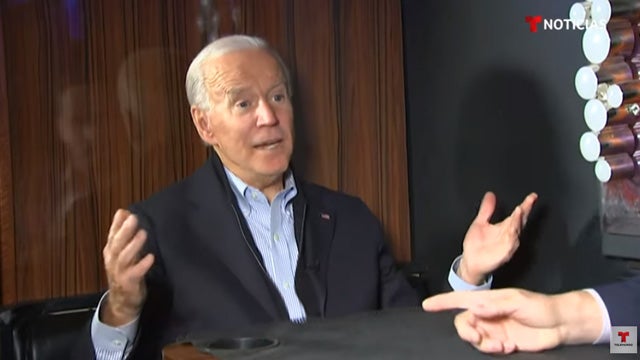 BIDEN: Well, look, here’s what I’m not gonna do. I’m not gonna — and I know you’re not intending to do this — play the game to take the eye off the culprit. The culprit here is what may have looked bad, but wasn’t anything wrong, is totally different from whether a president has held up $400 million in aid that — for Ukrainian military —

BIDEN: — when Ukrainians are dying and shot dead by Russians in uniforms without marks on them in the Donbass, that is criminal.

RUSH: Mr. Vice President, you’re just pathetic. All of you really are just pathetic. That’s the best you’ve got? (impression) “I’m not talking about my son. I didn’t even know what my son was doing! My son and I have never talked about any of this. So screw you, Balart! But I’ll tell you what’s important: Donald Trump withholding $400 million in aid from Ukraine while — while — while Ukrainians are being shot, while brave Ukrainians are being shot by evil Russians.”

Except none of that happened. How many times do we have to say it? Vice President Biden’s on videotape bragging about withholding money from Ukraine unless they fired a prosecutor who was looking into his son. Biden gave him six hours. (impression) “If you don’t believe me, call Obama. This is real. You want your money, get rid of that prosecutor,” and Biden’s telling this story bragging about it, and they fired the prosecutor, and he gets a round of applause. Meanwhile, Trump did not withhold the aid. Thirty minutes, a couple of days, Ukraine got the aid. They got zilch, zero, nada, during Obama — and they lost Crimea at the same time.

RUSH: Okay. I want to go back and relive this, ’cause we got these sound bites with Biden on better audio quality than what we had yesterday. This is Biden losing it with an 83-year-old voter in Iowa. The voter’s name is Merle Gorman. He’s a retired farmer, and I think he’s a former Marine, if I have that right. He confronted Biden about Ukraine… 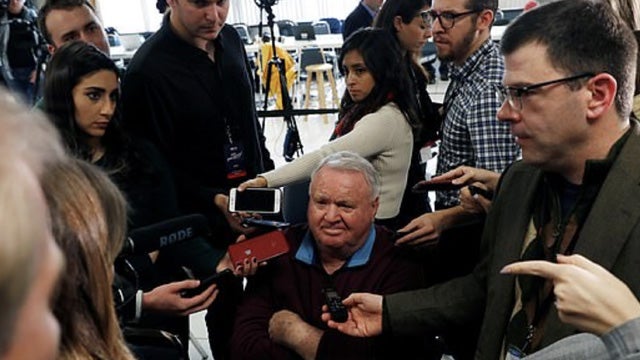 GORMAN: [Y]ou, on the other hand, sent your son over there to get a job and work for a gas company that he had no experience with gas or nothing, in order to get access for the president. So you’re selling access to the president just like he was. So you —

BIDEN: You’re a damn liar, Man! That’s not true. No one has ever said that. No one can prove that.

BIDEN: You see it on the TV?

GORMAN: All I do is watch TV.

BIDEN: No, I know you do, and by the way that’s why… I’m not sedentary. I get up and — and — Well, let him go. Let him go. Look, the reason I’m running is I’ve been around a long time and I know more than most people and I can get things done. That’s why I’m running. And you wanna check my shape? All right, let’s do push-ups together, Man. Let’s run. Let’s do whatever you want to do.

RUSH: (impression) “Let’s do push-ups together, Man! Let’s run! Let’s run. Let’s do whatever you want. Let’s take an I.Q. test, okay, Man? Let’s go.” Now, Biden lied through his teeth here and the voter is exactly right. He’s seen it on TV. What the voter has seen is Biden brag about getting a prosecutor fired in six hours for investigating his son. Biden was telling the Council on Foreign Relations, bragging before the story, “Yeah, I told that prosecutor. I said, ‘You gotta fire this guy in six months or you’re not getting any of the foreign aid that we promised you.

“‘And if you don’t believe me, call Obama. Obama will back me up on this,’ and in six hours, they fired the son of a b—-.” He’s bragging about it. This what the voter has seen. He wanted the prosecutor fired. The prosecutor was investigating his son, who indeed had a job with a natural gas company and didn’t know anything about natural gas, and was being paid $3 million a year. So after Biden says, “Let’s take an I.Q. test, Man, okay? They weren’t through. It continued.

BIDEN: No one has said my son has done anything wrong, and I did not on any occasion, and no one has ever said it. Not one —

GORMAN: I didn’t say you were doing anything wrong.

BIDEN: You said I set up my son to work in an oil company. Isn’t that what you said? Get your words straight, Jack.

BIDEN: You don’t hear that on MSNBC.

GORMAN: The hell I didn’t!

BIDEN: You did not hear that at all. What you heard… Look, okay, I’m not going to get into an argument with you, Man. But look, fat… Look, here’s the deal. Here’s the deal —

GORMAN: It looks like you don’t have any more backbone than Trump does when you’re — I’m not voting for you.

BIDEN: I know you’re not, Man. You think I thought you’d stand up and vote for me? You’re too old to vote for me.

AXELROD: He should have handled it. He could have spared himself a lot of trouble at the beginning of this whole saga if he had simply said what Hunter Biden has said, which was it was a mistake to go on that board. He should just say that and move on. But he’s gonna get a lot more of these provocations the longer he goes in this race — and if he deals with them in this way, he’s gonna create other problems for himself that go to whether he has the discipline at this stage in his life to do the job. If he had approached it in, uh, a different way, if he had said, “That’s not true…” Even calling him “a damn liar,” I think that was over the line, but it showed some fight. But then to get into the push-ups and how much he knows and… was just, uh, seemed a little bit off the rail.

RUSH: It was off the rail because Biden’s off the rail. Remember, Mr. Axelrod, this is the guy… We’ve got Biden saying so many crazy, stupid things. He’s looking at a guy in a wheelchair out in Missouri — Biden’s out in Missouri opening up something — and he’s trying to praise some local Missouri official, legislator, Chuck something or something, and Chuck’s in a wheelchair. Biden looks at him and says, “Stand up, Chuck! Stand up, man! Let ’em applaud you. Oh, my God. Oh, my God. Chuck — Chuck — Chuck can’t stand up.

“Joe Biden actually made some news. This is the kind of stuff frontrunners are supposed to do.” The Drive-Bys are out praising Biden for stepping into some good fortune here by ragging on an 83-year-old guy, calling him fat, challenging him to an I.Q. test. “Yeah, that’s the Joe we know. Joe doesn’t take guff from anybody. That’s the Joe we know. Joe doesn’t stand down to anybody, especially mean old 83-year-old bullies. You can count on old Joe to stand up to everybody.”

That’s the way they’re playing it. But then don’t forget we played this sound bite from Telemundo. Because this guy challenged Biden on it, now the rest of the media feels the need to have to do this. They’d give Biden a pass on all of this Hunter Biden-Burisma stuff. But now this guy’s shown up. And, by the way, this guy after all the, “I ain’t voting for you. I saw it on MSNBC!”

“You did not see it on MSNBC. You did not see it!” “I did.” “The hell if I didn’t see it on MSNBC.” (laughing) So Biden is acting like he knows what is and isn’t on MSNBC and his voter watching MSNBC… This was a political meeting of the hopeless and the deranged. But it was still as funny as it can be. “I.Q. test, push-ups. Let’s run, man, you fat whatever,” (laughing) and then Biden saying he didn’t say that.