RUSH:  I want to give you the examples from the hearings today that I cited for you in the first half hour of the program.  Both of these went uncommented on.  Both of these went unrefuted.  They were allowed to stand there and thus penetrate the minds of people watching.  Both have been exposed as bogus.  But the point is, every one of these examples is false.

These are edits and misinterpretations of Trump statements.  They are filled with misdirection, editing, and basically they are lies.  Now, if they are willing to do this, what does it say about the rest of their case?  Here’s Barry Berke, the opening speaker, Democrat counsel, in his opening remarks.  It’s audio sound bite number four in three, two, one… 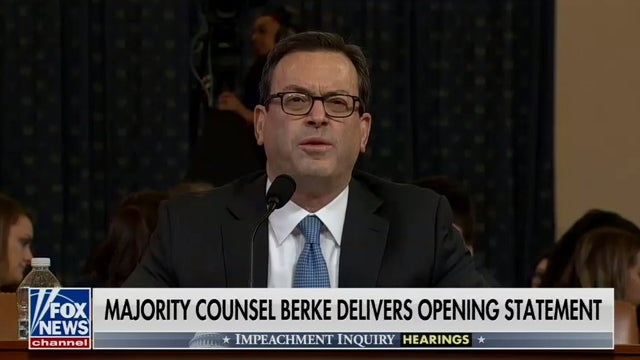 BERKE:  President Trump has said the same thing in responding to the prior investigation by Department of Justice and defending his conduct.  Here’s what he said…

THE PRESIDENT:  … then I have in Article II, where I have the right to do whatever I want as president…

BERKE: That he has the right to do whatever he wants as president!  That is as wrong is when President Nixon said a similar thing.

RUSH:  He did not say that.  Oh, he said it.  He was talking about having the right, the constitutional authority to fire Robert Mueller or to fire James Comey.  Article II establishes that the president is exclusively in charge of the executive branch, and everything in the executive branch operates under his auspices.  If he wants to fire the U.S. attorneys, he can fire ’em.  If he wants to fire every ambassador, he can fire them.

Trump’s saying, “Look, it’s Article II.  I can do whatever I want here.”  The Democrats have taken that one little bite totally out of context and are applying it to make Trump look like he wants to be a king, like he thinks he’s a king, like he can to tell Ukraine, “Investigate Biden or you’re not getting aid, and announce the investigation of Biden or you’re not getting aid.  I’m president.  I can do anything.” 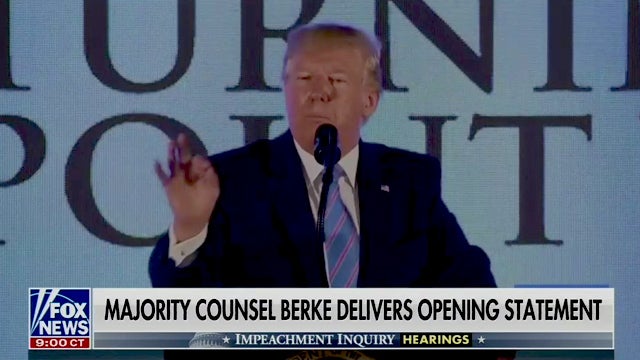 If they’re making this up, if they’re taking this out of context — just like they took out of context the George Zimmerman 911 call in the Trayvon Martin case. They edit video all the time.  They edit audio all the time.  They do it to change the context and change the meaning.  Now, if they’re willing to do that here in an impeachment proceeding under oath… This guy was under… Wait a minute.  He wasn’t under oath, because Nadler couldn’t figure out whether this guy was a witness or a lawyer for the staff.

It was about his constitutional authority in Article II to fire Robert Mueller.  So, again, if they’re willing to do this, then how strong can their case be?  But the point is, it still hasn’t been refuted on TV in the committee hearings, unless the Republican lawyer has done it in this hour.  But it was not refuted when it happened.  It was not refuted.  There wasn’t an objection from the Republicans on the committee.  There wasn’t an objection from the Republican lawyer sitting right next to the Democrat lawyer lying about this.

I’ll guaran-damn-tee you if the Republicans tried something like this, the Democrats on the committee or the Democrat lawyer sitting next to the Republican lawyer would have stood up and shouted and said, “You’re lying; you’re making it up,” and they would have to gavel them quiet. But they would have still done it.  Now, the next example is audio sound bite number 4, and this one is so old that you’ve heard me use this I don’t know how many times.  This is Barry Berke again, the Democrat lawyer, and he is in his opening remarks.

BERKE:  Let me show another clip from candidate Trump on the, uh, campaign trail. 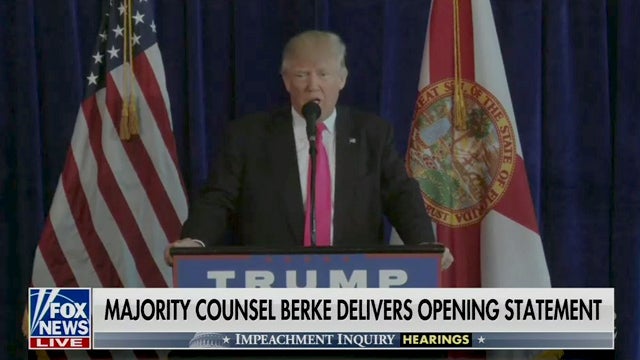 THE PRESIDENT:  Russia, if you’re listening, I hope you’re able to find the 30,000 emails that are missing.  I think you will probably be rewarded mightily by our press.

BERKE:  And Russia was listening! Within approximately five hours — five hours — of President Trump’s invitation to Russia to interfere in our election by trying to hack and obtain the emails of his political opponent, Russia, in fact, tried to do that for the first time! They took candidate Trump —

RUSH:  Stop the tape!  That is such a big lie, I don’t even know how to deal with it.  Hillary’s emails were already missing.  Nobody has accused the Russians hacking her emails.  That’s a DNC server.  Hillary deleted her own emails! Nobody has ever accused the Russians hacking Hillary.  She may have in her dreams later on.  She had 60,000 emails on her illegal server — well, illegally on her server — and she promised to turn ’em over to the State Department.

They only got 30,000.  There were 30,000 missing.  Everybody’s wondering where they were.  Trump is making a joke.  “Russia, if you’re listening maybe,” because the Democrats had Russia on their brain at the time.  So these are two glaring examples, and this one, “Five hours later, the Russians hacked Hillary Clinton’s email after Trump invited them to do it!”  Folks, if they’re willing to make this up, what does it say about the rest of their hopeless case?