The Never Trumpers Will Never Change Their Minds

RUSH: We have Jeanine from Fort Worth on the phone. We’ll start with you. Welcome. Great to have you on the program. Hi.

CALLER: I wanted to ask you, after listening to your program yesterday, the thing that kept coming to my mind is, do you think, now that this report is out, that the Bushes, Bill Kristol, all the Never Trumpers, do you think that their minds will be changed at all?

RUSH: No. Their minds have been closed since Trump was a candidate. This is not gonna open their minds. Why do you care? Why do you care whether Bill Kristol changes his mind or something or any of these other Never Trumpers?

CALLER: Well, really not so much Bill Kristol, but I had such affection for George Bush until all of this Trump stuff, and it just broke my heart.

RUSH: Well, Bush is kind of — he hasn’t been deeply immersed in all this stuff. I mean, you are concluding that Bush is in that camp that disapproves of Trump as presidential material. But, look. I can understand, if you had donated, say, if you had supported conservative magazines or websites or blogospheres on the basis that you really believed they were conservative and you really believed that they were advancing your ideas. 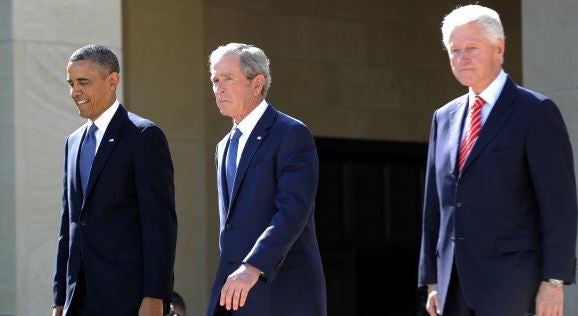 And then this comes along and you find out that you’ve wasted your money by propping these people up. Now, I can understand that if that’s why you want them to change your mind. But they’re not gonna change their mind because they, too, are driven by pure, abject hatred. There’s no amount of evidence that’s gonna change their mind.

CALLER: You know, and it continues to astonish me every day the amount of hatred. It’s heartbreaking to me. But I appreciate you. Thank you for all that you do, and I just wanted your thoughts on that. I guess I’m an eternal optimist for most things in my life, and I was just hoping mainly for the Bush family that this might have softened their opinion just a bit.

RUSH: This is a toughie. I think in one respect — and I have said this before — I think George W. Bush has on a few occasions himself been a victim of the very people that are out trying to get Trump. And the fact that George W. Bush remains in that camp is evidence of just how deep and powerful and omnivorous what we call the deep state is.

They want to continue to be accepted by the nameless, faceless power brokers that run this operation, that run this deep state, administrative state, whatever you want to call it. And it’s big, and it’s deep. I spoke about it yesterday in terms of what Barr and Durham and all of us are really up against here, what Trump has really taken on here.

It’s not these names being bandied about today. It’s not Comey, Strzok, Priestap, Clinesmith. It’s none of these people. These are the foot soldiers in this. These are people whose names we don’t know, in many ways. Not totally. But the people you’re talking about, they want to show their allegiance to that group. And the way you show your allegiance is to continue to hate and despise and be part of the effort to get rid of Donald Trump.

These people have been, I think, illustrated as phonies from the get-go. I mean, here’s Trump, who has — I’ve said this a bunch of times, but to me it’s very powerful. Here’s Trump who has implemented policy after policy after policy that these people have supposedly devoted their lives to, they have sought donations from you to advance these policies, to try to make them real. Economic policies, immigration policies. And they want no part of these policies working and benefiting the American people. They want no part of them as long as Donald Trump has any linkage to them.

Now, I didn’t have to face this because Obama was who we thought he was. But I’m just giving you an example. I guarantee you a lot of people would have changed their opinion about me, that I would have been governed and dominated by hatred, not events, not real things. And for us, opposition to Obama always was policy. It was also policy related. It was always our fear of what Obama and the left intended for this country to become, and that’s why we opposed it.

But we didn’t devote our lives to trying to impeach the guy or get him thrown out of office. We thought we had to beat ’em at the ballot box. Only in doing it that way are you literally gonna have a majority that you can govern and effect the things that you believe. These people don’t look at it that way. The hell with the will of the people. The hell with majorities at the ballot box. If the ballot box goes the wrong way, we’ll just ignore the ballot box. We’ll try to overturn the election results. This is what we’re up against here. And they want to claim there’s no bias in this? I gotta go. I appreciate the call, Jeanine.