RUSH: TIME magazine has named its Person of the Year. There was a rumor yesterday it was gonna be the whistleblower. But then they figured out they can’t name the whistleblower without embarrassing Schiff. So the Person of the Year — and, by the way, Karen Tumulty, who now works at the Washington Post, used to be at TIME magazine for 10 or 15 years, after they announced their choice, Karen Tumulty tweeted: I saw this process from the inside. The Person of the Year is chosen by one person, the managing editor of the magazine. There is no committee. There is no public assessment. All of that is a sham. The managing editor casts the lone vote whoever he or she wants it to be. 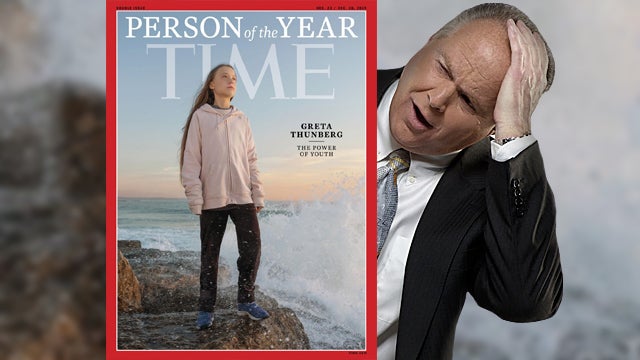 And this year TIME magazine’s Person of the Year is a 16-year-old indoctrinated propagandized teenager named Greta Thunberg of climate change fame. A 16-year-old kid. What does that tell us? It tells us that they have reached the end of their rope on climate change. Not that they’re gonna give it up, don’t misunderstand. But if the best they’ve got to advance that failing cause is a 16-year-old? Well, that’s what they’ve done.

And I guess they think that the emotions involved in honoring a 16-year-old will prove the power of the movement. In fact, folks, what’s happening to them is that they are slowly suffering great damage from the poisonous hatred that is coursing through their very existence. It isn’t healthy. It isn’t uplifting. It isn’t positive. It destroys. It’s destructive. And they are enmeshed in it and hopelessly cannot escape it.