How Can You Take the Round Mound of the Gavel Seriously?

RUSH: The Round Mound of the Gavel just finished a civics lesson. I guess they’re getting close to voting on the articles of impeachment ’cause Nadler was talking about (doing impression) “The founders gave us three branches of government. We have the Congress and the executive branch, president controls, and the judiciary, checks and balances. Congress given checks and balances, uhhh, to make sure the president doesn’t become a dictator. He’s not gonna become a dictator, uhhh, we may be unpopular, that’s for the voters to decide. We’re not gonna sit here and have a president refuse us document requests. Not gonna have a president sit here and become a dictator on our watch.” 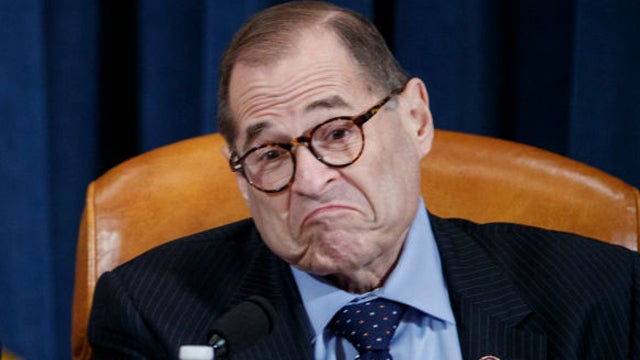 He’s a dictator now. (continued impression) “We’re not gonna permit it. The checks and balances, Congress has a check and a balance or (mumbling) it’s important civil liberties don’t get trampled, don’t care how popular we are, we may get elected, we may not get reelected, not gonna sit here and permit a dictator.”

These people are — I mean, if you can look at this dispassionately, they’re genuinely hilarious. Now, personally, I can’t help but laughing at them. “But, Rush, but, Rush, it’s so serious.” I know, I know. That’s the contradiction. But, man, these people are pathetic, and they are a joke, and they are exactly what happens to you when you abandon all sanity and become eaten alive by your hatred, especially hatred that is rooted in a sense of entitlement and superiority, which these Democrats obviously have.