RUSH: There was a bombshell in TIME magazine yesterday. A bombshell story, and it’s been referenced this morning in the hearings. Don’t know if you’re watching them anymore. Wouldn’t blame you if you’re not. A bombshell from TIME magazine. I almost couldn’t believe it. It totally takes the entire foundation of the Schiff-Nadler impeachment proceedings out from under them. It totally destroys the basis on which they did all of this.

It has been mentioned today by Republicans on the committee. They’d read from the story. They have talked about it. It doesn’t faze the Democrats because this has never been about fact, it’s never been about anything Trump did because Trump hasn’t done anything. It’s purely and simply about the fact that Trump won.

RUSH: Hey, let me get to this bombshell news and have audio sound bite number 25 standing by. Now, it really is bombshell news, but for that to be perceived, you have to have a basic understanding of the Democrats’ attempted case for impeachment during the Schiff committee hearings. 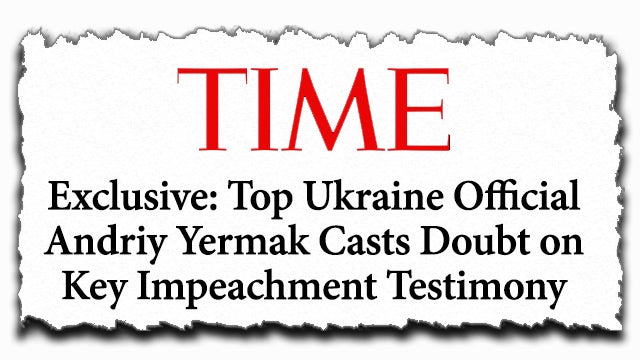 The Schiff committee hearings is where they brought in all the State Department ambassadors, all of these civil servants, all of these bureaucrats whose noses were all out of joint that Donald Trump even got elected, that somebody so smelly and somebody so deplorable and somebody so unsophisticated and so uneducated could possibly be thrust into their elite world.

And Donald Trump didn’t use them. I mean, they weren’t fired. Some of them were reassigned, but he didn’t consult them. He didn’t use them. And these were people who thought of Ukraine as their own country even before the United States. They live there, they work there, they knew people there, they went to restaurants, they had affairs, they had sex there, did everything there. And they looked at Ukraine as almost an adopted child, helpless, incompetent, and threatened by a giant bully, Russia.

And they were happy as clams and pigs in excrement when Obama was president. (interruption) What? Well, they were. I said excrement. No aid was given to Ukraine. Russia was allowed to come in and take Crimea, and they all thought it’s wonderful. Nobody did anything to stop it. And in the Obama administration, there was no incompetence because, well, they were there. I mean, they were the best and the brightest.

So Trump comes in and surveys the scene, says, this is crazy, and appoints some people that he’s known, gotten to know as ambassador to the European Union, such as Gordon Sondland, and he replaces some others like Yovanovitch. And they were so, so hurt, they were so disappointed. Trump was throwing away all of these years of expertise and sophistication and knowledge in favor of like-minded boobs like him. 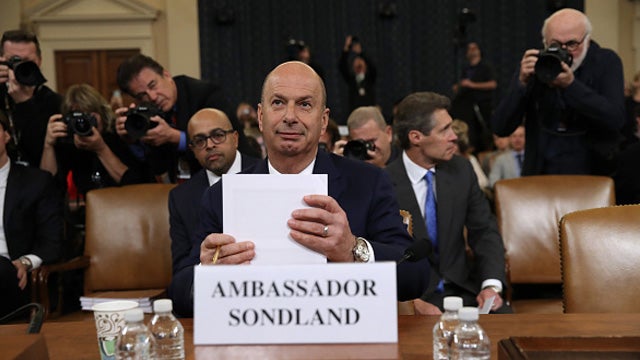 He may as well brought in a bunch of construction workers to run foreign policy, as far as they were concerned. So the one person in all of this that the Schiff committee relied on — and even this was flimsy — was Gordon Sondland. Because Gordon Sondland, if you remember — and you probably don’t — Gordon Sondland testified down there in the basement at Schiff’s room that was not open to anybody, and then after Sondland, here came Bill Taylor and some of the others.

And after they testified, Sondland said, “Oh, yeah, I need to revise my testimony.” So Bill Taylor says some things that are incriminating to Trump that Sondland had not said. Sondland says, that’s right, that’s right. And so he asked to amend his testimony, which he did. And that is where the bombshell begins.

This bit of news completely undercuts the entire Ukraine impeachment case. The only witness with firsthand knowledge of anything close to a quid pro quo was Gordon Sondland. Gordon Sondland testified that he told president Zelensky’s adviser, Andriy Yermak, that he thought — he couldn’t remember for sure — he amended and revised his testimony at this point after hearing from Bill Taylor and Yovanovitch and some of the others.

He thought, he presumed that Trump wanted Zelensky to make a public announcement about investigating Burisma before he, Trump, would release the aid. Sondland then told Bill Taylor and others that, yes, he had told Yermak that. So then this gets passed around. Sondland therefore become the source for the story that Trump demanded a quid pro quo, and it was aid in exchange for Zelensky announcing the investigation into Burisma. Not starting it. Not doing it. Just announcing it.

These people claim Trump didn’t even care whether the investigation actually happened. He just wanted it announced. He wanted the announcement from Ukraine that they finally were gonna be looking into Burisma and Hunter Biden and Joe Biden.

Well, this has all blown up because TIME magazine went and talked to Andriy Yermak. Yermak, again, is Zelensky’s adviser, and he’s the guy that Sondland thinks — he said to this guy, “I think Trump wanted Zelensky to make a public announcement.” He wasn’t sure. He presumed so. Yermak told TIME magazine that Sondland never told him that. In fact, Andriy Yermak says the two of them never even spoke. Except for a few innocuous remarks in passing, they never had any kind of a private conversation ever.

Yermak said, “We bumped into each other in the hallway next to the escalator, as I was walking out. And I remember — everything is fine with my memory — we talked about how well the meeting went. That’s all we talked about.”

That’s it. He didn’t tell me one thing about Trump wanting an investigation, demanding an investigation, withholding aid, not a thing. And TIME magazine has to admit these comments cast doubt on an important moment in the impeachment inquiry’s reconstruction of events, specifically, the only known point at which an American official directly tells the Ukrainians about the link between U.S. aid and the announcement of specific investigations.

Yermak has come along and said he didn’t even tell me that. We never had a meeting. We ran into each other coming off of an elevator. He never said a word to me about anything to do with a meeting, with an investigation. And TIME magazine knows this is bad. This is very bad. These comments cast doubt on an important moment in the impeachment inquiry’s reconstruction.

There’s one other thing about Sondland. Sondland, he did not put this — remember he had a 20-page opening statement. He did not put what I’m gonna tell you in his opening statement. It came out in questioning. He said the president said to him when asked, Sondland said, “What do you want? What do you want?” Trump said, “I don’t want anything. I don’t want a quid pro quo. I don’t want anything. I just want Zelensky to do the right thing, what he said he was gonna do.”

Well, right there, direct testimony from Sondland, no quid pro quo, Trump openly said he didn’t want a quid pro quo. It’s not ignored, it’s been swept out of the record, and instead what they kept in the record was Sondland’s testimony that he thought Trump wanted a public announcement from Zelensky investigating Biden in the exchange for aid flowing.

Well, now Zelensky’s number-one aide, Yermak, says, “We never talked about it. Sondland never said this to me.” So the Republicans today at the markup of the articles of impeachment hearing kept harping on this as literally taking the bottom out of their case. This literally blows up the entire impeachment case.

We have a primary aide to Zelensky saying, “Nope. Nobody ever talked to us about demanding a public announcement of an investigation in exchange for aid.” It never happened, and Sondland didn’t say a word. Sondland in that testimony is why these articles of impeachment exist, and it’s all the Democrats have ever had.

So now the question becomes, well, what does Sondland think he was doing then? He altered his testimony to say that he had told Yermak that he thought, he presumed — and, by the way, he never said with certitude — that he presumed Trump wanted Zelensky to make a public announcement about investigating Burisma before he would release aid. He just assumed it because of other things he was hearing.

Again, Yermak said he never said a word, it didn’t happen. If that didn’t happen, then there’s literally no basis for this impeachment. So now we have to start asking, well, what the hell was Sondland doing here? Sondland’s a Trump hand-picked guy. Now, we know that Sondland’s wife, her businesses were being boycotted. She’s real estate and hotels, in Oregon. She was being boycotted, she was being bullied. And one of the boycott movements being led by a Democrat member of Congress named Brunauer, Brunauer, something.

We also have subsequently heard reports that three women have accused Sondland of sexual harassment in the European Union office that he occupied. So why in the world would Sondland amend his testimony after others had testified saying, “Yeah, well, I just thought Trump was demanding an investigation in exchange for aid,” when the guy he said it to is now openly denying that it ever happened and in TIME magazine.

Now, Sondland didn’t testify about talking with this aid until he revised his testimony after Bill Taylor said that he had told Zelensky’s aid about the link. Sondland might have just been shooting off his mouth to impress Taylor and he didn’t want to admit it or it was because of his wife being pressured. But whatever it is the bottom line is the Democrats have relied here on a witness who is shaky at best and cannot be verified in his original statements.

So this came up numerous times today. It was brought up by Republicans and they said, “What are we doing here? I mean, this is your whole case. And nobody here’s even talking about it.” Finally the Round Mound of the Gavel decided to weigh in on it, and here he is, Jerry Nadler. 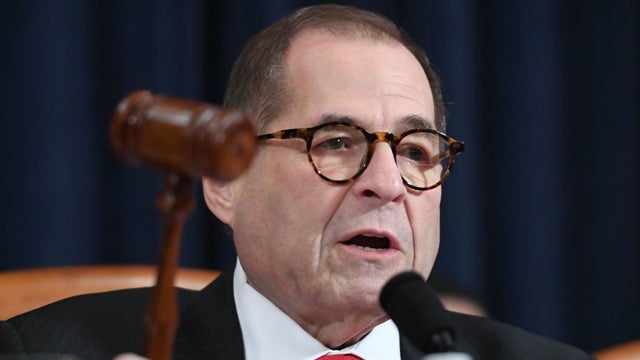 RUSH: So we’re just gonna not believe Yermak and we’re not gonna believe Zelensky because they’re lying, too, and they’re lying because they’re afraid of the bully, Donald Trump, has got a loaded gun pointed at their heads. So here’s testimony, here’s a witness speaking before the TIME story, so forth, Yermak, denying all of this. “No, we don’t believe that. We’re not gonna –” They can’t believe it because it undercuts their whole case. “We’re not gonna believe that, these people are lying because –”

Do you realize, not only are the Democrats trying to destroy Trump, they’re making a buffoon out of this guy Zelensky. They’re literally destroying this guy on the world stage. They’re making him out to be a total toadie and a buffoon when in fact he has been elected in Ukraine to clean up that country, to get rid of the kind of corruption that permitted people like Biden to show up and get prosecutors fired.

And the Democrats, man, it doesn’t matter. They will destroy anybody or anything, including the American the electoral system if they have to. And they have done that. You talk about casting aspersions, you go out and talk to your average Democrat voter and they will tell you that the 2016 election wasn’t fair and it was rigged and the 2020 election is already rigged. They will tell you that because their Democrat leaders have convinced them, have told them that that’s the case, when it isn’t.