RUSH: “Democrat National Committee Balks at Effort to Alter Debate Qualifications.” Can I tell you what’s happened here? The Democrat debates began, and there were 23 people, and at one time they had ’em all on the stage, and they found out it was too many, that most people never got to say anything. If they did get to say something, it was for 90 seconds.

So the Democrats demanded rules to limit the number of people so that on the stage would be those most likely to win and those people would have more time to say things and to debate and be persuasive. 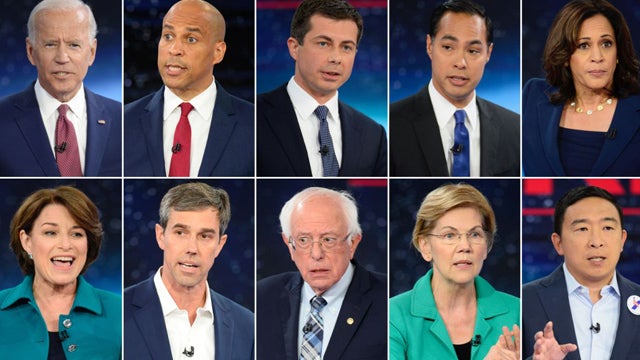 Well, what’s happened? According to their own rules, the African-American and minority candidates no longer qualify to be on the debate stage. Kamala Harris, kaput. Cory Booker, kaput. Russian agent Tulsi Gabbard, kaput. And the only people remaining are rich white men. And there’s only one minority, and that’s Andrew Yang, whose latest campaign stunt is to have supporters get on their knees and open their mouths and he squirts whipped cream in their mouths or Reddi-wip or whatever.

Yeah, I don’t know what it is. It’s some Millennial thing. I guess you prove your loyalty. Sit down on your knees, you open your mouth wide, and he sprays a can of Reddi-wip in your mouth until you practically choke and have to spit it out and everybody starts laughing. I guess you proved that you’ll swallow Reddi-wip for Andrew Yang. I don’t know what it is.

And the headline: “Democrat National Committee Balks at Effort to Alter Debate Qualifications.” See, all of a sudden now that their own rules have resulted in the only remaining candidates being rich and white, guess what? The rules are unfair. And when things are unfair, and you do not reach the stated requirements according to the rules then you should whine until somebody changes the rules for you, and that is Cory Booker.

So a bunch of whining and moaning, our party’s better than this, it’s not fair, it’s not right, only rich white guys in our party. Where’s the diversity? And so they’re gonna open the stage up and let it get clogged up and crowded with all these diverse losers thereby limiting the amount of time that people that do have some chance of winning are gonna have.

And the DNC’s balking at that, but they don’t have a prayer, I don’t think. Can the Democrat National Committee get away with denying demands from African-Americans for fair representation, you think they can get away with it? Yeah. What am I thinking? It won’t be reported like I’m telling it to you anywhere else.