RUSH: CNN poll: Support for impeaching and removing Trump has dropped nine net points since last month. It falls now to 45 to 47. It was 50 to 43 in favor. It’s now 45-47 against. Support for impeaching Trump has even dropped among Democrats from 90% to 77%. This is a direct reflection on Adam Schiff and Jerry Nadler. By the way, the IG report has totally exposed Nadler as a full-fledged, 100% liar. This is great. I’ve continued to dig into the IG report. 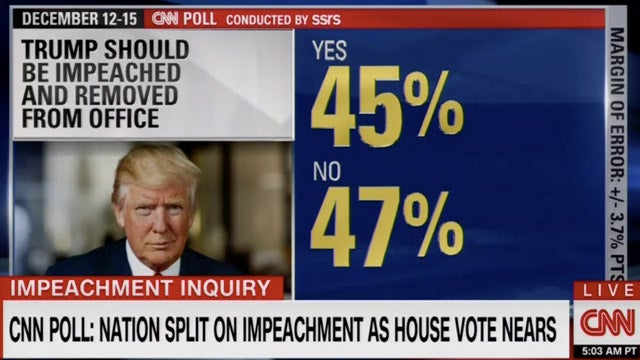 The Rules Committee at the House today is meeting to discuss the parliamentary procedures for presenting the full articles to the full House for vote, and they are continuing to lie through their teeth about the supposedly misconduct of Donald Trump.

RUSH: Well, I can give an example. Nadler cannot be at the Rules Committee hearing today because there’s some sort of family emergency in New York. I don’t know what it is. Doesn’t matter. So Jamie Raskin, a Democrat from Maryland, is taking his place. And these people are just lying through their teeth. They are continuing to lie through their teeth.

This guy said the president has abused his office, engaged in misconduct, and they give the quote where the president said, “Look at Article II. I can do anything I want.” They know they’re lying about this! He didn’t say he can do anything he wants. It was in the context of an interview two different times. One with George Stephanopoulos in which he’s saying Article II gave him the power to fire Robert Mueller if he wanted to, could do anything he wants regarding Mueller. They know they’re taking that out of context. They know that they’re lying about this.

And if they’re lying about one thing, you have to assume they’ll be lying about a lot of things. The one thing that is unmistakable in all of this, they don’t even have a crime. They do not have an impeachable offense. The second thing that Raskin did, they’re still repeating the Trump joke, that Trump asks Russia to go find 30,000 Hillary emails and five hours later, the Russians hacked the server. 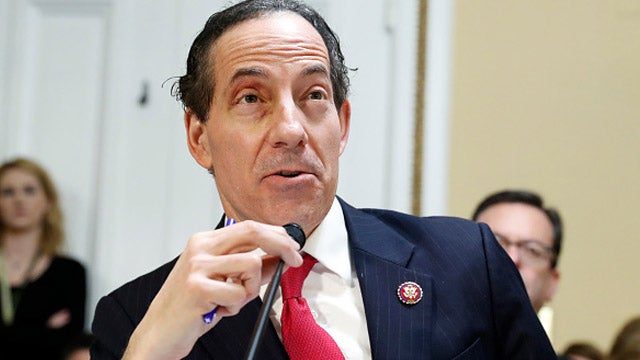 That’s not possible. When Trump cracked that joke, the DNC server had already been hacked, it had already been shut down. We still don’t know who really did it. But it was out of the way. Trump’s cracking a joke and making fun of the media and making fun of the Democrats, and these clowns throw it in their articles of impeachment. They’re just lying through their teeth. And it’s over and over and over again, and the media, of course, enables it, trying to make it look like it’s real, and none of it is.

RUSH: We have Rob in Boca Raton. Rob, great to have you on the program. Hello, sir.

CALLER: It’s great to talk to you, Rush. My concern is twofold, that, one, all the lies that the Democrats are putting out there, Americans are just hearing these sound bites and these headlines, and they’re not going in to really find out what’s going on. And the second thing is that there are pockets of the left that are just gonna storm the polls.

I just came from New England on a business trip. I couldn’t believe the people up there. They actually believe the things that people like Congressman Cicilline says to ’em, and just some things that their governor says to them. They just lie about Trump. Conservatives need to be strong, and they need to storm the polls themselves and make sure this guy gets elected.

RUSH: Why do you assume that the Democrats are more energized and ready to go than Trump voters are?

CALLER: Trump voters, and I think sometimes Republicans, they sit back and they think, “Okay. We got this won. It’ll be okay.” These leftists, they are so radicalized that they’ll do anything, they’ll stuff the ballot box. I’m worried that there are some places around the country where we’ve seen it over the years that they’ll stuff the ballot box. But if you come down here to Florida, South Florida, wow, you see the economy booming. They’re putting up housing sites three, four hundred houses at a time like they used to do back when I first came here in the eighties.

RUSH: Do you know how many job openings there are in the country right now? I saw this just this morning. Over seven million jobs are open. That’s seven million jobs that cannot be filled. That aren’t enough workers to fill them. We’re at full employment. The economy is booming so well. You know, you tell me that they’re energized in New England. They’re always gonna vote Democrat there no matter what. They can be as energized as they’ve ever been, it’s not gonna change anything.

Massachusetts, Rhode Island, those places are gonna vote Democrat no matter who’s on the ballot. Could be Dr. Manhattan from Watchman on the ballot, and they would vote for him, Mr. Blue. I don’t think it’s something to get alarmed about to find out a bunch of rabid liberals in New England are rabid liberals. They’ve constantly been rabid liberals.

I think the great secret in this upcoming election is how ticked off Trump voters are and how many new ones there are going to be. And I don’t think anybody’s aware of what efforts are being made at every Trump rally to identify first-time voters and turn ’em out. I think you can sit there, you can react to the media making it look like Trump’s already lost, but I wouldn’t fall into that trap if I were you. Not by a long stretch.

RUSH: I am told that Doug Collins, the ranking Republican member here on the Judiciary Committee, is a witness today. The House Rules Committee is putting together the parliamentary procedures for submitting the two articles of impeachment, determining what will be permitted in terms of length of time for debate, whatever other rules there are prior to the vote on these two articles.

This started before the program began. And I basically saw the Democrat witness, who was just lying through his teeth again about Trump claiming Article II lets him do anything. He never said that, never even got close to meaning what they say he said. And then they cite the Trump joke about, “Russia, if you’re listening, maybe you can find Hillary’s emails.” By the time Trump cracked the joke, Hillary had already taken a hammer and BleachBit her server. Her emails had been dispensed with. If they’re lying about those two things continually, they’re probably lying about everything else.

So Collins got a question from the actual ranking member of the Rules Committee, Tom Cole, Republican, Oklahoma. Question: “Is there any actual evidence that the pause, the delay on the Ukrainian money, the security assistance –” meaning the aid, the foreign aid “– is there any evidence that the pause in Ukrainian foreign aid was for the president’s improper personal political benefit or might he have had other reasons for temporarily withholding the aid?”

COLLINS: Part of it is the law itself which says that, you know, even though it was certified it was the president’s call to make sure that there was no corruption in where aid is given. There were other countries during that time which aid was held. I think from an appropriator’s standpoint, Mr. Cole, you’ll also understand this aid was not even scheduled to go out. It had to be done by September…

COLLINS: …30th. It actually went out early if you look at it from that timeframe. The corruption in the Ukraine was so prevalent, a recent poll said 68% of normal, just every day Ukrainians had said that they had bribed a public official in the past year. There were reasons for this to be discussed and reasons to go at it. But also, I want to point out one last thing on this other issue. Fast and Furious, the infamous issue with the Obama Administration, it was seven months from first subpoena to first documents. Seven months. (crosstalk) That doesn’t fit the timeline here.

RUSH: Okay. Now, I’m told that Collins is killing it there. What he’s talking about is the Democrats’ claim that Trump delayed the aid in order to get the Ukrainian president to announce that he was gonna investigate Biden and his kid. The Democrats are claiming that Trump didn’t even really care if there was an investigation. He just wanted the president of Ukraine to announce it for his personal political benefit.

But there was no such announcement, and there was no such investigation, and the foreign aid resumed, and it actually ended up getting to Ukraine prior to the date we had committed. It got there early. This is what Collins is saying. Therefore, there can’t possibly be any personal political advantage accrued to President Trump by way of this proceeding. He got nothing for it, and Ukraine got what they were promised. 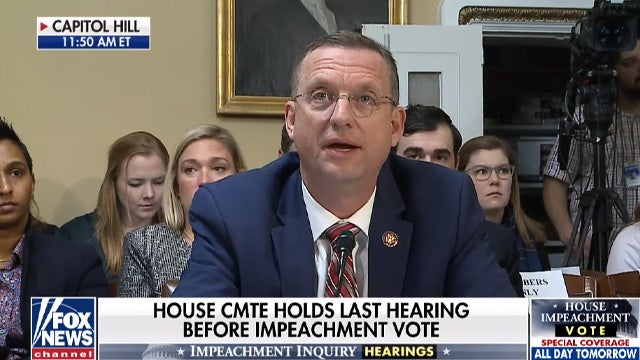 Now, did you understand Collins saying that or you did you need me to tell you what he said? Because some of this is inside baseball with these guys. What Collins said was Ukrainians did not have to do anything Trump supposedly demanded, and they got their aid, and they got it early. Therefore, there can be no personal political benefit to Trump whatsoever in this. It’s that cut and dry. So you then say, “What is this article of impeachment?” It’s about intent.

Every claim they are making can be destroyed and has been. But they’re not stopping because it isn’t about the substance of this. It’s about making it sound so horrible in news sound bites, ’cause not everybody’s watching this today, but they may see sound bites of it tonight, so it’s just the ongoing effort to at its bear minimum lie to the American people about what a rotten guy Donald Trump is, even though they have no evidence for it and every attempt at evidence has been blown to smithereens.

CALLER: Yeah, Merry Christmas to you and your staff and families, Rush. Bo asked me to get right to the point, so I will. Last Thursday you played the clip of Hillary saying that the Article 1 was due to Trump asking Russia to find the emails. Well, that happened on July 17th of 2016 in the middle of the Democrat National Convention while Trump was on the campaign trail, four months before he was actually elected president, and six months before he was sworn into office.

RUSH: Yeah, it’s Article II, not Article I. Yeah. But Hillary had already BleachBit her emails. She’d already taken a hammer to the server, and he wasn’t even president yet. No that’s all exactly right.

CALLER: Right. So how can it be abuse of power and not simply a case of freedom of speech?

RUSH: Well, because they’ve got him saying in an interview talking about firing Mueller. “Hey, look, Article II…” He said this to George Stephanopoulos. “Article II, I can do anything I want.” You take that, take it out of context, and you can make the guy look like he either doesn’t know the Constitution or he’s a dictator in waiting. He was talking about firing Bob Mueller. “I can do whatever I want. I run the Justice Department. I can fire Mueller or not. I can do whatever I want.” They’re taking it out of context.

The point is, they’re lying big time about it — and what does that mean?