RUSH: La Grange Park, Illinois. This is Tim. I’m glad you called, sir. It’s great to have you with us. Hello.

CALLER: Hello, Rush. Thank you very much for taking my call, and Merry Christmas.

RUSH: Thank you, sir. Same to you.

CALLER: This whole impeachment thing, I’m 90% sure will go well for all of us and the president, but with the Never Trumpers in there like Mr. Romney, I think if they have the opportunity to get rid of the guy, if it gets that far, they’re gonna take it because they don’t care about what we think, what we want. And it’s nice to see all these folks giving Schiff a hard time, and I hope that translates into votes next year, but I am just concerned or leery that if it gets that far, they’re going to take the opportunity because it’s creeped along all the way, you know —

RUSH: Wait, wait, wait. If it gets where? What far? How far do you mean?

CALLER: If it gets to a trial, if it’s not dismissed —

CALLER: — I believe that the Never Trumper folks like Romney, who I don’t trust at all — and the reason I’m skeptical is because they kind of hosed us over before with the McCains and Obamacare. And like for us, we’re paying over $30,000 a year for my wife and myself for health insurance, and we were so looking forward to Obamacare getting repealed, and we were let down big time. And so I’m skeptical, and maybe you can make me feel a little bit better here.

RUSH: Well, look. You’re right to be skeptical. And you don’t need any evidence, other than what Romney and his buddies have said. They hate the guy. Romney wanted to run for the Senate in hopes of helping get rid of Trump and, you know, another steppingstone back to maybe the Republican presidential nomination sometime down the road.

The Never Trumpers, the Republican, slash, conservatives Never Trumpers are at one with the Democrats in their hatred for and opposition to Donald Trump, and in some instances are leading the movement. No, you’re dead-on right to be suspicious about Romney. 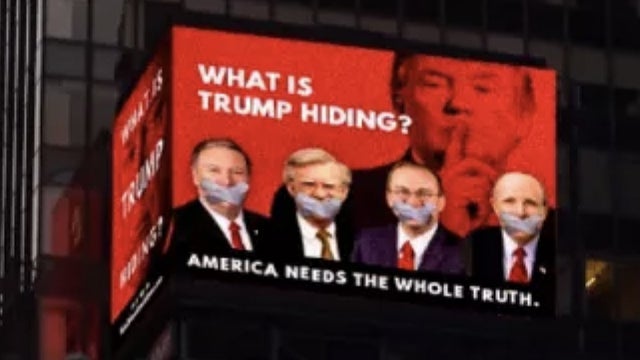 A couple of stories here. I alluded to one of them at the beginning of the program as a teaser. This is a Sara Carter story. Headline: “Disgruntled Reagan and Bush Era Officials Pay for ‘Anti-Trump’ Ad in Times Square — A large electronic billboard asking, ‘What is Trump hiding?’ appeared in Times Square, in New York City yesterday. ‘If the president did nothing wrong, what does he have to hide? If they tell the truth, what if [sic] he afraid of?’ asks the billboard.

“The billboard shows President Trump with his finger to his mouth, as well as four current and former officials with duct tape over their mouths: Mike Pompeo, John Bolton, Mick Mulvaney and Trump’s personal attorney Rudy Giuliani. Many members of the media media [sic] portrayed the billboard as work of ‘an anti-Trump Republican group,’ without disclosing of [sic] who they are.” Well, here’s who they are: “Bill Kristol, Christine Todd Whitman, Linda Chavez, Bob Inglis, and many others…”

So “Bill Kristol, Christine Todd Whitman, Linda Chavez, Bob Inglis, and many others” have purchased a billboard in Times Square asking, “What is Trump hiding? If [he] did nothing wrong, what does he have to hide?” That’s one story. “George Conway, attorney and husband of senior White House aide Kellyanne Conway, will lead a new group of anti-Trump critics aimed at thwarting President Donald Trump’s re-election.” By the way, the Never Trumpers are panicking because the Democrats have failed.

Kristol and his buddies — Jonah Goldberg and Steve Hayes and all these other guys — are gearing up now even more so because the Democrats have failed to make their impeachment case. So these guys are getting in gear, and they have created a “Super PAC, named The Lincoln Project.” It “is touting itself as a ‘formal step forward’ for Never Trumpers and will begin operations with $1 million in funding commitments.

These are the Never Trumpers running the super PAC called the Lincoln Project designed to get battleground voters to oppose Donald Trump.

RUSH: Julie Kelly here with another great story at American Greatness. The headline here: “Never Trump Conservatives Started the Smear Campaign on Carter Page,” and that would be Bill Kristol and Matthew Continetti, his son-in-law who runs the Washington Free Beacon. Now, these guys, these Never Trumpers, they’re all men. They’re a bunch of… Ann Coulter described them as “girlie boys.” I don’t know if I would go that far. 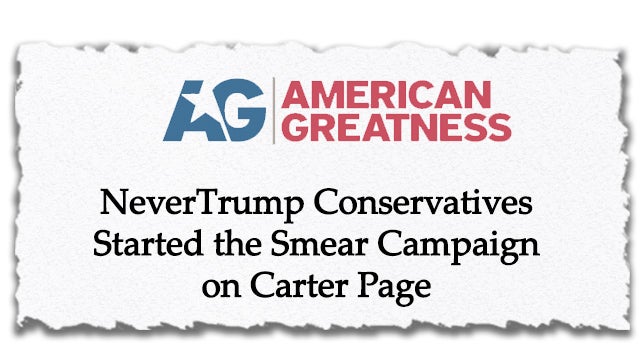 I think they’re just personally offended that some guy like Trump — who was the high school jerk that got all the girls and stuff they were jealous of back in high school — is now doing what they think is their exclusive right, i.e., having power and running government. His presence reminds them of what great failures they have been. But these guys have ended up hurting innocent people. They’re part of the cabal that has tried to destroy Carter Page, for example.

These are the guys that hired Fusion GPS during the Republican primaries first.

Hillary heard about ’em and then hired ’em herself later.