CALLER: Rush, Merry Christmas, and thank you so much for your radio show. I’m very nervous. First-time caller the jitters.

RUSH: Well, you don’t need to be. This is gonna be one of the most pleasant experiences of your life. When it’s over, you’re gonna want to do it over and over again.

CALLER: I want to ask God to bless you for all that you do. My dear, darling wife gave me a subscription to Rush 24/7 two years ago. She re-upped it last year for two years, and it is the best thing I have when I commute. I never miss a show. I absolutely love it. 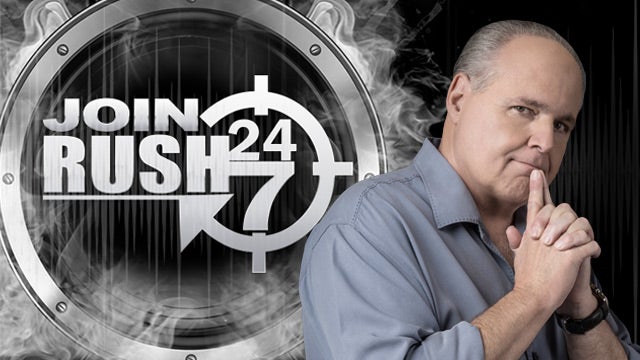 RUSH: Now, do you mean you use the app on your iPhone to access the program? Is that what you mean?

CALLER: Yes, sir. Previously, I couldn’t really listen. I can’t listen at work, my schedule doesn’t allow it, and I wasn’t able to catch your show very often. But now with the app, I can download wirelessly at work and listen on my commute home — and if there’s some runover the next day, I can listen on my way back to work.

RUSH: Right. As a full-fledged member, because of your very thoughtful wife, you can download the Dittocam version of it and watch it if you want to.

CALLER: Not when I’m driving.

RUSH: Well, okay. True. Not when you’re driving. But still, the audio version is for you there, podcast form or full-fledged radio show. Well, I’m glad that it’s of value to you. I really am.

CALLER: Absolutely. And when I get home, she actually debriefs me, and she gets an update as to what’s going on on your show. You’ve actually converted her from a previous Democrat to a Republican.

CALLER: Well, there’s two things. First, education — and that’s what you do. I mean, my kids don’t listen to me, but they listen to your ideas even though they’re the same ideas, because you have a credibility that I don’t. But second, uh —

CALLER: No, I absolutely agree with that. But, at the same time, I think the single biggest thing that convinced her was once she started to see my paychecks come home and how much was coming out them with the government and what they were wasting the money on. I think, as you always say, “Follow the money,” and that’s absolutely true. She said, “You know, this is insane that these people are taking this much money from our check and just wasting it.”

RUSH: You remind me, I have something fascinating along those lines in the Stack of Stuff today — and, boy, is this your lucky day, because you’re gonna be able to replay this program with you on it, and you’re gonna be able to share this call with this upcoming data with your wife. There’s a story here in the Daily Signal by Adam Michel called, “The Left Is Itching to Repeal Your Tax Cuts. Here’s What That Would Mean.” 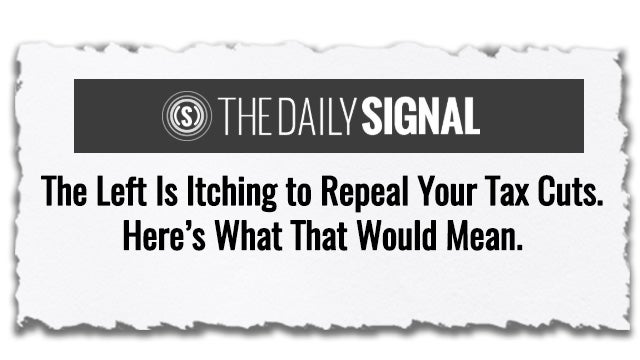 They go through and tabulate how much money the government wants to retake away from you from Trump’s tax cuts by eliminating them — and, basically, here’s the average number. “If the tax cuts were repealed in 2020,” Democrats win and actually repeal the tax cuts, “the average American would” send $30,000 to the government over the next 10-year period. Taxes would go up,” but, more importantly, “incomes would go down.”

Incomes would go down in every state because every state would then raise taxes. If the federal government does it, here come the states. In some of these states, the blue states want to reinstate the tax deduction from the tax cut that Trump instituted. People would once again be paying through the nose, and would be so much of an increase taking the tax cut away that people would notice it.

CALLER: They already take about 50% of our money every year between all of the sales taxes and FICA.

RUSH: Well, congratulations — and, look, sincere thanks too. I’m glad that your membership in Rush 24/7 is providing you with so much value.

CALLER: I come home so much relaxed after listening to you as opposed to having to sit in traffic and fight the commute.

RUSH: Oh, gosh, I can imagine how tough that would be. Having to listen to someone on the radio you don’t want to listen to, at the same time being frustrated with traffic and the delays and all. I can’t imagine.

RUSH: See, that’s a benefit that you have that I don’t. I don’t get to listen to this show because I’m too busy doing it. So I don’t get to benefit from all of those things that you listeners get to benefit from, because I’m here doing it. I know what you’re saying. “Well, listen to a replay of your program.” It’s not the same when I know what’s coming. Besides, I listen to it in a hypercritical way. I never watch myself on TV — I don’t want to see it — and I haven’t listened to a replay of this show in so long, I couldn’t tell you.

CALLER: It’s seamless and flawless. You do a great job. It’s a natural talent, I think.

RUSH: Well, I appreciate that. I really do. But I’m really gratified that you’re getting such great value out of the Rush 24/7 subscription. Merry Christmas to you, Marty. Thanks so much.