Did You Know John Dingell Once Told Trump to Go to Hell?

RUSH: I checked the email in the break. It says, “Rush, you haven’t commented on Trump’s insulting of John Dingell.” Well, okay. So Trump is in Michigan. Grab sound bite number 20. Looks like this might be it. In three, two, one, go ahead and hit it.

THE PRESIDENT: I don’t know. Maybe? Maybe? But let’s assume he’s looking down. Now they talk about this phony impeachment. And she’s out there, “Well, we have to look seriously at our president because he may have violated the Constitution of the United States.”

RUSH: Okay. Now, this — wait a minute. Now, this is classic. This is classic. This is classic of how Trump is a real guy. Okay. So he goes out of his way to give John Dingell an official farewell funeral. John Dingell’s wife, Debbie, calls him and thanks him profusely. He did something nice, he swept away all partisanship. He could have denied this, just like he could have denied the McCain family the funeral they wanted. But he didn’t. He gave ’em the full state funeral.

And what’d they do? They used it to rip him. Now, I don’t know about you, but when I engage in an act of niceness or consideration or do something for somebody and they throw it back in my face, I get offended, even though I don’t allow people to offend me.

I said, “What the hell is this?” So he engaged in an act of respect for her husband, John Dingell, who was not a nice guy. We both got an award at some similar thing way, way back a long time ago. Ron Perelman got an award at this thing. It was Brandon Tartikoff, who had become a friend of mine, he was a big network prime time programmer wunderkind, and he presented the case for Ron Perelman, who’s the Revlon CEO.

But he had to preface it with, “I don’t agree with –” I would never, in a circumstance like that, would never consider that. And as such I’ve never forgotten it. What was the point? So here Trump goes out of his way to give Debbie Dingell what she wants, a nice funeral, but why did he talk about the looking up business? Well, what nobody knows is or what nobody remembers is — and, no, folks, I’m not defending it or making an excuse. I’m trying to tell you who Trump is.

Trump loves doing nice things for people, and he doesn’t want never ending appreciation, gratitude, and thanks, but it’s like he’s always said, if you hit him, if you come back and attack him, he’s not gonna sit there and take it. So privately she tells him how wonderful it was and how appreciative she is. Publicly she goes and joins chorus about what a reprobate he is and how he deserves to be impeached and how he’s violating the Constitution and everything.

And he’s, “What the hell do I have to do?” Well, what people may know and have forgotten, Trump was on Fox News once with Bill O’Reilly. And during that appearance, Trump reiterated that he wouldn’t want to be in a foxhole with McCain. So Dingell tweeted, John Dingell tweeted, “On behalf of so many of my fellow veterans, please take two running jumps and go to hell, Mr. Trump.” Anybody remember that tweet? Probably not, CNN’s not gonna drag up that tweet from anywhere. Probably not. 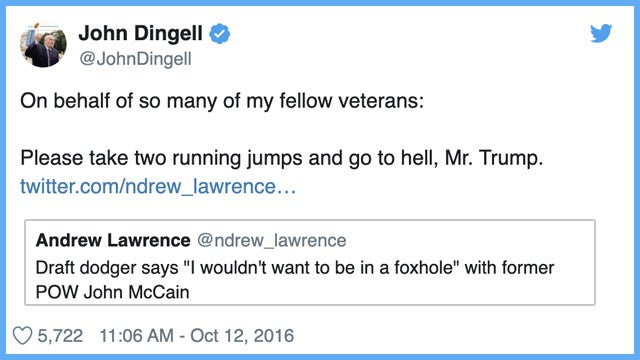 “I don’t care, Mr. Limbaugh, I don’t care. It doesn’t give the Trump the right to assume that Dingell is in hell.” Look, I’m not gonna sit here and defend or condemn. I’m just gonna tell you that Donald Trump is like any other normal person, when somebody disses him like this, he’s not gonna sit there and just take it and smile.

Two-faced people. You wouldn’t believe how common this is for people in private – look, as you know, I never, never want to turn this program into things about me. Sometimes I can’t help it because I am so famous. But I don’t like to be the reason the program becomes about me. But I’m just telling you, it happens a lot, that in private all these people, I’ve run into people in the media who have said horrible, rotten things or repeated them about me and in private they’ll say, “You know, we gotta do this, I’m sorry, I know you’re a nice guy.” Really? I’m supposed to sit there, “Okay, I understand, go ahead and keep lying. Now I know you don’t mean it. Is that what the message is?”

But the one thing Trump isn’t is anything other than what you think. He doesn’t put on airs. He doesn’t fake it, he doesn’t pretend. He is what he is. And that, folks, is another reason why I think that the Washington, D.C., establishment is so threatened. You’re not supposed to say that, not supposed to do that, that’s bad manners, that’s ill-tempered, that’s impeachable. (interruption) Well, you could say that. He has no filters.

At any rate, I don’t know if anybody remembers that Dingell tweeted, “Go to hell, Trump.” (interruption) You don’t remember that? (interruption) I’m sure this will be — well, now it won’t be the only place you hear it because this show is show prep for the rest of the media. Other people will dig up the tweet. You’ll see it on TV later tonight, the actual tweet itself, people will go out there and dig it up.