RUSH: This is from ABC News: “Iowa Man Who Tore Down, Burned LGBTQ Flag Is Imprisoned.”  The story’s out of Nevada, Iowa. “A man has been sentenced to more than 15 years in prison for burning an LGBTQ flag that was flying at a church in central Iowa. Adolfo Martinez, 30, of Ames, was sentenced Wednesday to 15 years for the hate crime of arson, as well as a year for the reckless use of explosives or fire, and 30 days for harassment. 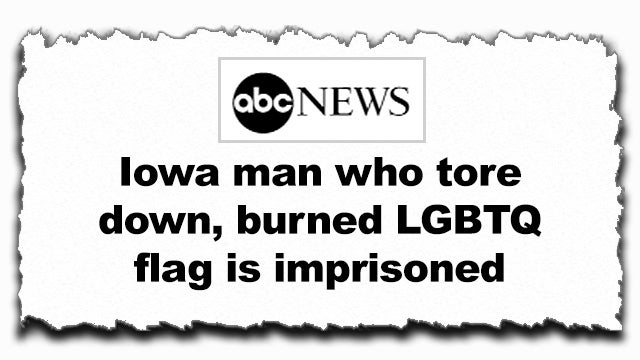 “The sentences are to be served consecutively, court records show. A jury convicted Martinez in November. He was arrested in June. Martinez said he tore down the [LGBTQ] flag that had been hanging from the United Church of Christ in Ames and burned it because he opposes homosexuality.” This is a classic illusion of what’s wrong with hate crimes.  This same guy… This same guy could burn an American flag and he would be feted as a hero.

He could take down an American flag and he could burn it, and we would go to court. The left would go to court to have his civil right to protest his country protected.  He would be a hero and not a single thing would happen to him.  This guy could sneak into Mar-a-Lago, he could rip down the Trump family flag, he could light it on fire, and all that would happen (if anything) is maybe a little jail time for arson.  But he would still be feted as a hero and his bravery would be heralded.

His courage for “speaking truth to power” would be plastered all over every news network there is out there for taking down a Trump flag and burning it.  But because it is a flag attached to homosexuality, the LGBTQ movement? Fifteen years.  I don’t care, folks. That is not justice, this is social justice, and this is exactly the kind of thing I was just talking about in the battle that we are in with the left.  It’s not what everybody thinks, Republicans versus Democrats for who gets to have power for four years in the White House.

Because the Democrats have gotten to the point now where they refuse to accept elections that they lose, and they begin immediately to try to redo them and undo them.  They did it in 2000 with George W. Bush and the Florida recount.  We saw how that administration was treated throughout its two terms. And with Trump, Trump has been illegitimate since even before he was elected.  So the battle we are in is not Democrat versus Republican. 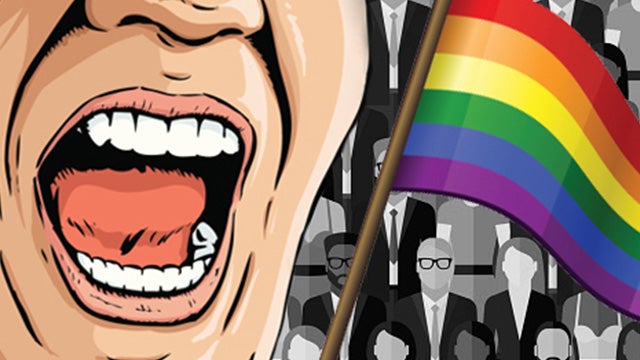 It’s American founding versus people who wish to transform America into something that it has not been founded to be.  Any time you have to put a modifier in front of “justice,” you can wave good-bye to justice.  There’s no social justice, gender justice.  What is all this? Cisgender? Binary gender?  There’s two genders.  There’s male and female.  Noooo, not anymore, and if you don’t agree with it, you represent an existential threat — and if you act on it, we might be able to put you in jail for 15 years like this guy.

You are a hero to the same people who put this guy in jail for 15 years.

Thought crime violations.  Everybody, when they hear about this, ought to be outraged over it.  But the radical leftist of every stripe — the maniacs, the social justice warriors — have everybody buffaloed and frightened.  So, 15 years for ripping down a flag and burning it because of the hate, because of the hate — even though he admitted it.  Well, so, you do a crime, and then you add the fact that there might have been some hate behind it, and we’ll make it even more punishable.