The Turtle on Fire (for the Turtle!)

RUSH: Here is Mitch McConnell.  I mentioned he had a great line about the accusation from Pelosi that she’s the one that has all the “leverage” now because she’s refusing to send the articles over to the Senate.  This is last night on the Senate floor, two sound bites from the Turtle.  Here’s the first one…

MCCONNELL:  We remain at an impasse because my friend, the Democratic leader, continues to demand a new and different set of rules for President Trump.  My colleague wants a special pretrial guarantee of certain witnesses whom the House Democrats themselves did not bother to pursue as they assemble their case. 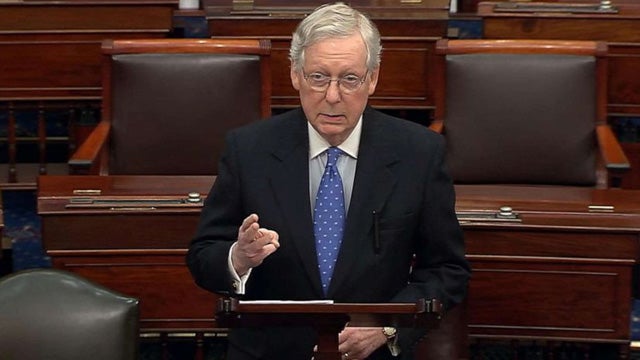 They don’t have any.  She is attempting to bully and use brute force with the rest of the Democrat Party to force the Turtle into conducting a further investigation with witnesses that she didn’t even bother to call.  She didn’t bother to call them because the president wasn’t gonna let them come up and testify.  He went to court to stop it.  They want to impeach him for that, calling it “obstruction of Congress.”

So now she wants the Turtle to call these witnesses so the investigation can go on.  The Turtle said, “We don’t investigate here.  You do that!  You bring us the case, and we’ll either dismiss it or we’ll sit in judgment of it, whatever.  But you don’t get to tell us what to do. We’re the jury.  The jury doesn’t do investigations.”  Here’s sound bite number 2 from the Turtle.  This is the one that has at great line in it.

MCCONNELL:  House Democrats imply they are withholding the articles for some kind of “leverage” so they can dictate the Senate process to senators.  I admit I’m not sure what leverage there is in refraining from sending us something we do not want.  Meanwhile, other House Democrats seem to be suggesting they’d prefer never to transmit the articles.  Fine with me.

RUSH: (laughing) This is great. The Turtle’s on fire, for the Turtle. “I’m not sure what leverage there is in refraining from sending us something we do not want.” (laughing) We don’t want your stinking articles. We don’t want anything to do with this because it’s not legitimate. “Meanwhile, other Democrats seem to be suggesting they prefer never to transmit the articles.” And there are some of those.

And, folks, it all boils down to — I don’t know if there is anybody sane. The reasonable members of the left know that this is gonna lead to an acquittal which is the absolute last thing that they want. In an election year, for it to be recorded as a matter of constitutional congressional law that the president was found not guilty. “Doesn’t matter, Rush. They’d still be able to say he was impeached.” Nah. I’m telling you, the reason she’s not sending these articles over there is because she knows she doesn’t have a case.

Now, I just saw on CNN a Pencil Neck kind of guy named Brad Sherman. He’s also from California. Have you noticed, by the way, speaking of elitism and all, whenever the Democrat leadership gathers on TV, like when Schiff and Nadler and Pelosi and all the people on these committees gathered, do you know what? They’re all from either California or New York. None of them are from the middle of the country. They’re all California, New York. They’re all radical, coastal elites. The House leadership. And yet they tell us that their party is the home of diversity.