What If the Soviet Union Won the Cold War?

I’m gonna take this question. There’s a reason I wanted Darrell to hold on. I have been thinking about discussing this for the past month, and I decided against it ’cause I didn’t want to call attention to this. Do you realize how much, by the way, that limits me? When this show was young and didn’t have that big an audience, I could talk about anything without fear that it was gonna call attention to it and make it even more popular. 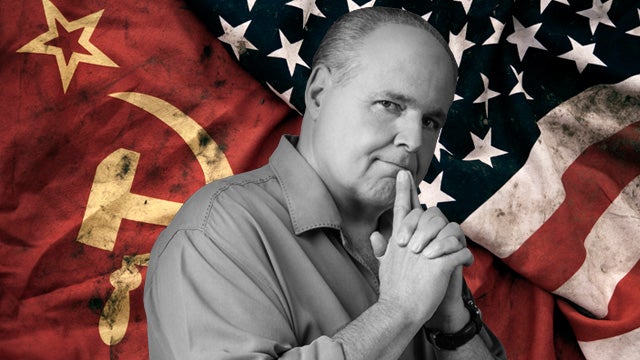 Well, now, since I am so famous — “a household name in all four corners of the world” — that whenever I talk about something… It’s like if I pick something out that I don’t like and start focusing on it, all I’m doing is creating curiosity about it, causing people to check it out, which is the exact opposite of what I want to happen. So I have to decide not to talk about it. So Darrell calls: “What woulda happened if the Soviet Union had won the Cold War?”

Well, there’s a television show out there that tackles the premise in the same way. What if the Soviets had beaten us to the Moon? I started to watch this show, and I had to turn it off in the second episode, ’cause it’s nothing but a left-wing political screech vehicle. I don’t even want to describe it in great detail ’cause all it’s gonna do is make you want to find out what it is. You’re gonna watch it, and it will defeat the whole purpose here of my criticizing it.

But it’s another one of these “America sucks. We could have so much better. If the Soviets had beaten us to the Moon, our space program would have been so much better than it was.” Who thinks this way? Who thinks this way? Of course, I’m right, and as, I watch tech blogs, media critics, they love this show — and you know why? ‘Cause it’s all about left-wing identity politics. You know why the Soviets beat us to the Moon? Because it was nothing but white men in charge of the space program in this show.

White men were evil and rotten, and they didn’t let women do anything, didn’t let African-Americans do anything — and in this show, the Soviets beat us and humiliate us and embarrass us. I’m saying, “What is the purpose of this?” These guys love this show because it is women who finally make it to the Moon when the United States was a much more fair and much more just and much more open society — and it’s all fiction! All it is, is a vehicle to be hypercritical in the identity politics fashion of the American left.

Now, I know some of you know the show I’m talking about. Others ask, “What is it, Rush? What is it? We want to watch.” No. I’m not gonna tell you. Find it on your own. It isn’t gonna be hard now. You gotta just Google search the two words I mentioned, and it will tell you. But I had to turn it off. But many of these critics on the left say, “Best show! Best show ever on this network.” I just… So, what woulda happened had the Soviets won the Cold War?

You know, Amazon has a show called The Man in the High Castle. What would have happened if Hitler had won World War II? I tried to watch the show. (interruption) Well, the same with me. I couldn’t get past the first episode of it. I even understood the premise and I couldn’t get through the first episode. These “what-if?” scenarios… I’ve often had a saying, “‘If’ is for children,” and “what-ifs?” are for infants. “What if the Soviets had won the Cold War?”

But they didn’t! Okay. So we could imagine: What would the United States be like had the Soviets won and taken control and we had become a communist nation? (chuckles) Well, you wouldn’t want any part of it, and the first people that would have been imprisoned are the very leftist journalists and advocates who think they would get most favored nation status of the Soviet leaders or communist leaders.

But, I mean (chuckles), America would really not be what it is if that had happened. But you see, folks, there was no way that was going to happen. The Soviet Union could not… I was talking about this over the weekend with somebody who said, “The Soviet Union was a massive cultural power.” No, it wasn’t! The Soviets were not a competing, massive cultural powerhouse. It was a Third World nation with a First World military. It never competed with us culturally.