Question: “I don’t think it can be overstated who he was, how powerful Soleimani has been, and for how long. This is not just taking out a terrorist. This is much more significant than al-Baghdadi or Osama Bin Laden.” Stop and think of that for a minute. Petraeus said it and that’s probably who she’s echoing. This is bigger than taking out bin Laden? You believe these people admitting Trump did something bigger than Obama did? Bin Laden? This is bigger than bin Laden? Just to give it perspective. So here is the response from the CNN chief international correspondent. 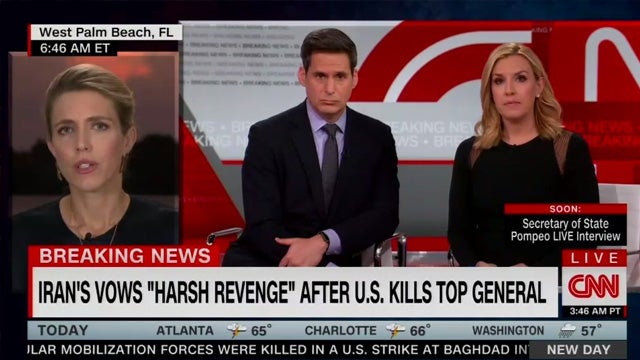 WARD: He’s almost something of a living legend in Iran. And when I spent time in the capital just last year, you could see that clearly. We visited the Museum of Holy Defense. The entire gift store is full of souvenirs bearing his image. You turn on the television, look online, you see people sharing videos of him reciting poetry —

WARD: — he’s attending the funerals of fighters who have been killed.

WARD: Not only that, he is the architect of Iran’s so-called access of resistance. This cannot be underestimated.

I don’t doubt that propaganda has been used to make the guy a hero. Poetry? Come on. Give me a break. But, anyway, this is the flavor of it all from CNN. That was Friday. “Trump took out such a wonderful guy. He was such a hero to the Iranian citizens. Oh, it’s so bad.” This is the accuse stuff it just drives people crazy. And the Democrats have no idea how many, how many Americans that they are isolating and angering with this take and all of this.

RUSH: As promised, we’ll start on the phones in Hermosa Beach, California. Scott, welcome, sir. It’s great to have you here with us.

CALLER: (garbled cell) Oh, Rush, mega dittos from sunny Southern California. Rush, I wanted to ask you: If Iran retaliates and kills a bunch of innocent Americans, do you think that will give Trump and the United States just cause and a good enough reason to take out and destroy Iran’s nuclear capability?

RUSH: Well, I mean, the short answer to the question is “yes.” But I don’t think it’s as… (sigh) Look, Iran right now does not have… I know what you mean by their nuclear capability. Right now, best of my knowledge they haven’t yet literally fortified a warhead on a missile with a nuclear warhead. They’re working toward it. The Iran deal enabled that and accelerated it. But, yeah, Trump has told ’em! (chuckles) Folks, this is classic. 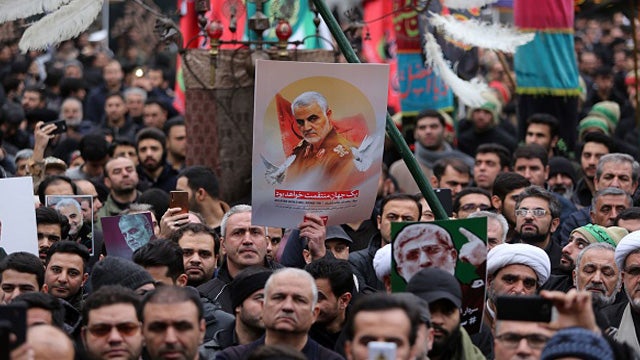 The Iranians respond, “Okay. There are 21 targets that we’re looking at!” Trump tweets, “Well, I’m got 52 of yours.” I don’t know how to say this other than to say it: The Iranians have not dealt with an American president like this. Whatever you think, if that’s good or a bad, they have not dealt with this. The Middle East is used to the current — well, is used to the Obama foreign policy establishment, and it’s typified by that sound bite I played, that montage.

They are aware, they are used to dealing with Americans who accept casualties, like those handed out by Soleimani. They expect to deal with an America that is accustomed and okay with being abused and taken advantage of by the United Nations. They’re used to dealing with a country that does not retaliate. I mean, this guy, Soleimani, has single-handedly been responsible for over 600 U.S. military deaths. There was no attempt to retaliate against him.

They are accustomed to that! I don’t know if they think the United States is a paper tiger, if they think the United States… They have to take us seriously. Our war… Our ability to project power is unlike any other nation on earth. I mean, don’t misunderstand me. They take that seriously. But in terms of dealing with somebody like Trump, he’s a foreign object to them. I mean, look who the Iranians are.

“Death to America! Death to America! Death to America!” And the Democrat Party picks up the chant, in one way or the other! Remember the old, the former president of Iran, Mahmoud Ahmadinejad? This guy, criticizing the United States, sounded exactly like any Democrat in a presidential campaign! So I think that it is the Iranians who are gonna be careful about what they do in response to this, in consideration for what Trump might do next — and that, I think, is something they haven’t had to factor as seriously before.