RUSH: Okay, I just got another glaring example of what I have been talking about all morning, why I am thankful for Twitter today. I want to put something up on the Dittocam. I can adequately describe this for those of you who are not watching on the Dittocam and can’t see this. It looks like the national security reporter for the Washington Post, a woman by the name of Missy Ryan, has posted two pictures in a tweet.

On the left is a picture of Tehran today, people mourning the death of Qassem Soleimani. On the right is a picture of an empty Washington Mall during Trump’s inauguration. And the quote that she has typed, “Tehran today vs. Trump’s inauguration crowd.” Rachael Bade (who is a colleague) tweeted out the photo that looked like they were celebrating Trump’s impeachment with the caption “Merry impeachment.” Well, this is the same dynamic duo.

So what they’re doing here, they’ve got this on the left is supposedly Tehran today, which — I just said — that crowd is there because they’ve been commanded to be there. The people of Tehran, the people of Iran are not free. For crying out loud, the Islamic Republic? This is a country where you get beheaded if you are given orders by the government and don’t do it! This is a country that beheads transgenders. 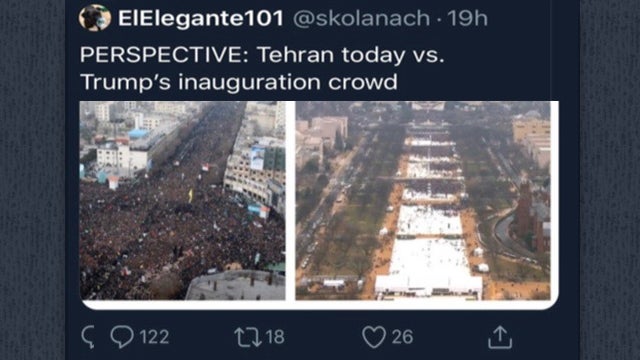 It beheads homosexuals when it finds them, and the American left is coming out in support of this regime. This is how convoluted, sick they’ve become. This is a regime that kills every type of lifestyle that the American left wants to promote and celebrate in this country. They get murdered, they get hunted down, they get imprisoned, they are beheaded in Iran — and that’s who the left thinks is preferable to Donald Trump.

So they’ve got these two side-by-side pictures of the Trump inauguration with the entire Washington mall there, it looks like about half full, and then the similar place in Tehran teeming with an overflow crowd in honor of the man Trump killed. “PERSPECTIVE: Tehran today vs. Trump’s inauguration crowd.” So the conclusion is, “See? This guy was more popular than Trump is. This guy… Trump took out somebody! Trump’s jealous. Trump took this guy out.

The Iranians are much, much more sympathetic for their dead leader,” blah, blah, blah, blah, blah. It’s a side-by-side comparison of Iran good, United States bad. Mullahs good, Trump bad. Mullah terrorist popular, Trump unpopular. I mean… Now, we’ll post the picture at RushLimbaugh.com for those of you not watching the Dittocam, but that’s the description.